The Oregon Maneuver, held in central Oregon from September 13 to November 8, 1943, was the largest military training exercise ever held in the Pacific Northwest. The training was critical in developing the skills of high-level officers and senior support staff so they could maneuver entire divisions in combat conditions. They especially needed the ability to coordinate infantry, armor, artillery, and aircraft against enemy forces. The Maneuver also provided intensive training in combat skills for soldiers of the IV Army Corps, three infantry divisions commanded by Major General Alexander Patch.

The first large-scale maneuver operations to train army units were conducted in 1935 in New York, with thirty-six thousand men. Subsequent maneuvers were held in Texas, Tennessee, and the Carolinas. The largest maneuver by far took place in 1941 in Louisiana and involved four hundred thousand personnel. Over seventy-five thousand U.S. Army personnel participated in the Oregon Maneuver.

By the spring of 1943, several military installations in Oregon had been charged with being part of large-scale training operations in central Oregon: Camp White, north of Medford; Camp Adair, north of Corvallis; and Camp Abbot, south of Bend at present-day Sunriver. In addition, a large air base had been constructed at Redmond. The Maneuver area included most of Deschutes County and large portions of Lake, Harney, and Crook Counties, a thinly populated region where the army units could operate freely.

In mid-July, troops and equipment left their home bases and began the journey by truck convoy to their first rendezvous in central Oregon, located in the triangle formed by Sisters, Redmond, and Bend. For a month, troops from throughout the Pacific Northwest streamed into the area, setting up camps along roads and in fields and pastures. Until the Maneuver began in September, each infantry division conducted its own training operations, with rifle practice at Camp Abbot and other locations.

The IV Corps training headquarters was located at Camp Abbot, and the Maneuver itself was made up of eight tactical problems, or maneuvers. For each problem, two infantry divisions were designated as the offensive (Blue) force and one division was the defensive (Red) force. For each of the eight tactical problems, General Patch issued orders detailing where the Blue and Red forces would be positioned to begin “hostilities.” Umpires, identified by white armbands, placed the forces in position, and troop commanders were on their own to attack or defend as appropriate.

These “free maneuvers” meant that the opposing commanders had to gather intelligence, determine strategy, plan their division’s movements, and issue their own orders. The fifteen hundred umpires spread throughout the operations area observed developments and determined when a unit was under fire. Since no live munitions were permitted, the umpires were responsible for determining casualties and evaluating the performance of all units, officers, and equipment.

Throughout the Maneuver, which officially began on September 13 and ended on November 8, troops endured heat, cold, dust, snakes, wind, and snow. The men’s main complaint was the fine pumice dust. After several vehicles passed on a road or trail, the soil became a fluffy powder, sometimes two feet deep. The ever-present wind, as well as the twelve thousand military vehicles used in the Maneuver, combined to stir up massive dust clouds. Flying over the area, a UPI reporter witnessed a dust cloud over five thousand feet above ground level.

The massive operations were big news in central Oregon. Army troops seemed to be everywhere—in towns and on the range and forest lands where tanks, artillery, aircraft, and infantry staged battles. Bend, with a population of about ten thousand people, was the largest town in the region. Redmond, Prineville, Lakeview, and Burns were much smaller, with two to three thousand residents. All hosted the large numbers of troops who were on leave between tactical problems. A USO facility was set up in Bend, and the town’s restaurants prepared meals for the soldiers, often with the help of army personnel who had restaurant experience. Many homeowners rented rooms to spouses and relatives of army personnel.

Even though the nation was at war, the army made no attempt to keep the Maneuver secret. When the exercise began in September, seven reporters arrived to provide daily coverage of the war games, providing detailed reports in newspapers and on the radio that were much like the actual war stories that often appeared alongside.

When Oregon Maneuver training ended in early November, the three infantry divisions and other participating units returned to their home bases, where the men soon received orders to join the fighting overseas. Troops from the Oregon Maneuver would fight in North Africa, Italy, the Philippines, Okinawa, France, and Germany. Seventy years later, in 2013, a soldier summarized his Oregon Maneuver experience: “It prepared us to cope with various adversities that we later encountered overseas in our part to win the war. While I would not describe the maneuver as being fun, it was interesting and we did benefit by what we learned. No doubt we did a better job when the chips were down.” 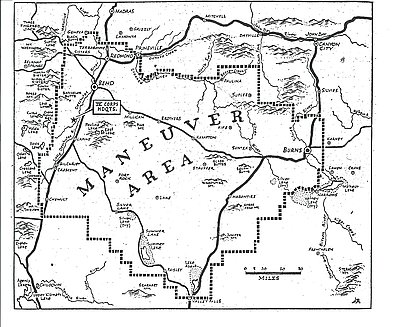 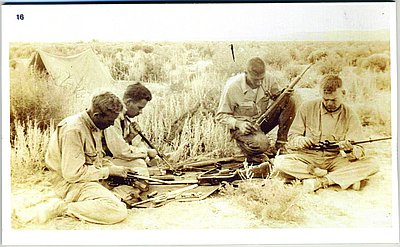 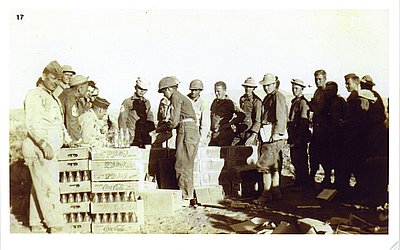 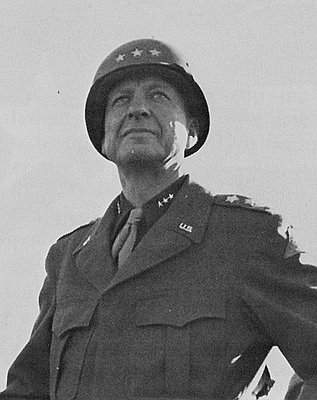 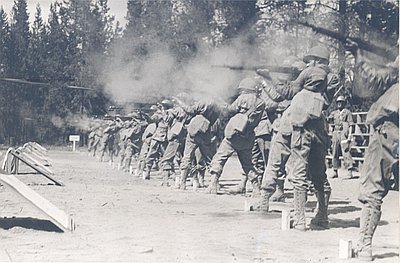 The 41st Division of the Army National Guard was organized on July 18, 1917, at Camp Greene, North Carolina, under the command of Major General Hunter Liggett. The division was composed of recently federalized National Guard troops from the Northwest and Midwest, including the Oregon National Guard's Third Infantry Regiment. These National …

The city of Adair Village is located in Benton County about seven miles north of Corvallis along Highway 99W. The name is derived from Camp Adair, a World War II training camp that encompassed more than 50,000 acres. The camp hosted as many as 45,000 troops and military personnel between …

On December 22, 1944, the Sherman County Journal reported that about a thousand men of the 1687 Combat Engineers Battalion, the 558 Heavy Pontoon Engineers, and the 1490 Engineer Maintenance Company were encamped upriver from the small town of Rufus, about twenty-two miles east of The Dalles. At Camp Rufus, …