The City of Lakeview, in northern Goose Lake Valley at an elevation of 4,804 feet, calls itself Oregon’s Tallest Town. By far the largest community in Lake County, it serves as the county seat and provides basic services, from medical facilities to ranching and equipment sales, for residents of southeast Oregon’s High Desert.

Lakeview sits in the western foothills of the Warner Mountains, a fault-block range that rises directly behind the east edge of town. The name was derived from the town's view of Goose Lake, to the southwest, although the long-term withdrawal of irrigation water from its source streams caused the lake to shrink so it is no longer visible from town. Lakeview’s high school teams are the Honkers for the Canada geese who stop on the lake.

Northern Paiutes of the Yahuskin band were early residents of the north end of the Goose Lake basin. Along with their Achumawi neighbors to the south, they hunted waterfowl at the lake and gathered berries and Klamath plums in the narrow canyons of the Warner Mountains.

The first white resettlers arrived at Goose Lake in about 1870. Among the earliest was M.W. Bullard, who built a cabin in what became Lakeview. At the time, Jackson County extended across the Cascade Range, far to the east of its present boundary. In 1874, as cattle ranching brought more residents into the area, the county was split to form Lake County, with Linkville (present-day Klamath Falls) as the interim county seat (Klamath County was formed from the western half of Lake County in 1882). Goose Lake Valley voters chose Bullard’s Ranch as the new seat in 1876. Bullard donated twenty acres and the county bought another three hundred acres from him for a town site.

Platted in 1876, Lakeview was the area’s main market town, with ranchers as the primary customers. During the 1880s and 1890s, according to a 1905 history of the region, Lakeview experienced “no rush, no boom, just steady development.” The town’s population exceeded 750 people by the turn of the twentieth century.

On the evening of May 22, 1900, Lakeview’s business district of mostly wood-frame buildings burned to the ground in a fast-moving fire. During that night, the red glow is said to have been visible to residents of Klamath Falls, some seventy-five miles to the west. Over fifty business establishments, as well as two fraternal lodges and the town hall, went up in flames. Lakeview rebuilt its downtown, this time in brick.

Klamath Falls soon eclipsed Lakeview in size and regional importance, especially after a major north-south rail line reached the town in 1909. But Lakeview began to come into its own after the narrow-gauge Nevada-California-Oregon Railway was extended north from Reno to reach its final terminus at Lakeview in 1912. The NCO was not a well-capitalized endeavor—some called it the Narrow, Crooked, and Ornery—but it enabled Lakeview to grow into a lumber town, milling pine from the Warner Mountains and other timbered highlands in the Fremont National Forest. This manufacturing trend became even more pronounced after 1927, when the NCO converted to standard-gauge tracks. By 1929, at least ten sawmills operated in Lakeview.

The New Deal brought Lakeview a new post office and a federal building, as well as several other public works construction projects. By World War II, the Depression had winnowed the number of mills to seven, but national demand for lumber skyrocketed during the war and Lakeview’s production stabilized. The war years also created an airfield (now owned by the county) to the west of Lakeview, where the U.S. Navy built an emergency landing facility used for training pilots.

After the war, when Lakeview’s mills were turning out increasing amounts of lumber, the Forest Service established the Lakeview Sustained-Yield Unit to ensure that area mills would have a dependable supply of logs into the future. Adding to the town’s prosperity in the late 1950s and early 1960s was uranium, mined and milled north of town. The radioactive tailings left at two of the larger mines later became Superfund cleanup sites.

Lakeview achieved its largest population in 1960, with 3,200 people. In the decades since, the population has steadily declined, to 2,300 in 2018. The mills began to close in the mid-1980s until only one mill operated in town in 2017. Government employees, including those working for the Forest Service, the Bureau of Land Management, and the state-run Warner Creek Correctional Facility, make up over a third of the town’s work force. A small but growing Hispanic population (about 7 percent of the total) resides in Lakeview, working on hay ranches and in the town's service sector.

Located at the crossroads of U.S. Highway 395 and State Highway 140, Lakeview receives a good deal of through-traffic, especially long-haul truckers. Hunting and fishing bring an influx of seasonal visitors, as does hang-gliding and paragliding at Abert Rim and in the Warners. Lakeview’s annual Free-Flight Festival attracts enthusiasts, and the town’s Labor Day rodeo caters to a local crowd. The county operates two museums in Lakeview, and the privately owned MC Ranch Chuck Wagon museum features the ranching history of the Warner Valley.

Lake County has invested in the town’s economic health, purchasing the NCO and buying a small ski area in the Warners outside of town, and the county library and hospital were funded by tax bonds. In 2002, when the Fremont and Winema National Forests were combined, the Forest Service kept the headquarters in Lakeview in a new building shared with the Lakeview District of the Bureau of Land Management. 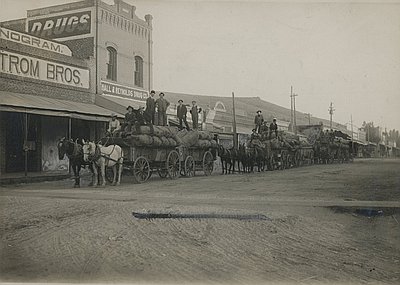 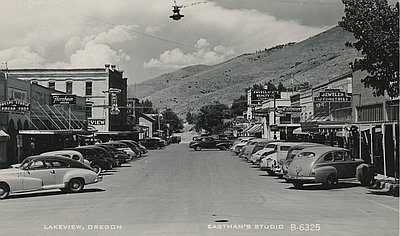 Abert Rim rises from the desert floor in southern Lake County like a giant, looming wall. It is one of the most formidable and longest fault scarp in Oregon, extending more than thirty miles from its southern end near Valley Falls north to Alkali Lake. At its greatest height, Abert …