Abert Rim rises from the desert floor in southern Lake County like a giant, looming wall. It is one of the most formidable and longest fault scarp in Oregon, extending more than thirty miles from its southern end near Valley Falls north to Alkali Lake. At its greatest height, Abert Rim towers more than 2,500 feet above the salt-ridden Abert Lake, Oregon’s most saline lake and a ghost of the vast great basin and high desert lakes whose shorelines still mark long-abandoned beaches. While on his expedition through Oregon Country in 1843, military explorer John C. Frémont named the lake for the commander of the Corps of Topographical Engineers, Colonel John James Abert, and the rim was later named for the lake.

Abert Rim (along with the adjacent lowlands of Abert Lake and Alkali Lake) is the northern-most vestige of the Basin and Range province, an active, faulted geologic landscape that includes most of southeastern Oregon and almost the entire state of Nevada. As the Basin and Range landscapes extended to the west, the relatively thin and brittle crust broke along faults. Known as listric faults, these curved fault planes are steep—sometimes even vertical—near the surface, but they curve and flatten out under the surface. This fault configuration causes large blocks of crust to tilt, creating walls of rock.

One such steep face of a fault block is Abert Rim. To the east, the backside of Abert Rim slopes gently toward Plush and the Rabbit Hills. The adjacent basin floor to the west, occupied by Abert Lake, which is fifty-seven square miles in area, is relatively flat. Basin and Range topography and faulting commonly develop enclosed basins that have no drainage outlet, and Abert Lake is a prime example. The Chewaucan River flows into Abert Lake, and the lake’s only outlet is evaporation. Brine shrimp abound, and their carapaces litter the beaches. Migrating waterfowl and shore birds—including eared grebes, Wilson's phalaropes, red-necked Phalaropes, and American avocets—find the lake an attractive stopover. It is also an important nesting site for rare inland snowy plovers.

The rocks that compose the harsh upper ramparts of Abert Rim are basalts, rapidly cooled volcanic rock that is 16.7 million years in age. They are related to similar flows of Steens basalts that are exposed between Silver Lake and Steens Mountain and to the extensive Columbia River flood basalts to the north. Geochemical and age data indicate that both of these enormous basaltic eruptions are related to the Yellowstone Hotspot, a mantle plume (hot rock that rises to the earth’s crust and releases extreme heat) that may have first reached the surface at Steens Mountain and that today drives the caldera and geothermal systems of Yellowstone National Park.

At Abert Rim, several basalt flows are extremely porphyritic, with large plagioclase feldspar crystals embedded in finer-grained material. These extremely thick, crystalline lava flows moved deliberately, but they also traveled as inflated pahoehoe flows—that is, sheets of smooth-looking lava flows that were lifted by the continuous flow of hot lava below the cooling crust, forming crystalized lava sculptures. Oregon’s state gemstone is the Sunstone, a rare, yellowish to gold copper-rich variant of the mineral plagioclase at Abert Rim that is found in related basalt flows about twenty miles to the east. 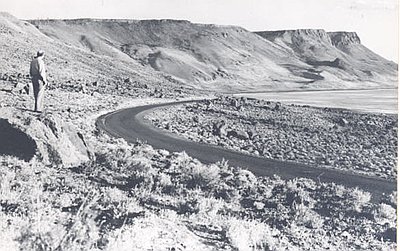 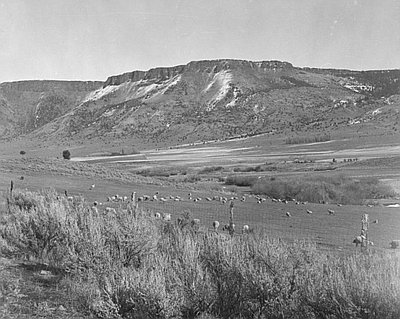 Hooper, Peter, G. B. Binger, and K. Lees. Ages of the Steens and Columbia River Flood Basalts and their Relationship to Extension-Related Calc-Alkalic Volcanism in Eastern Oregon. Geological Society of America Bulletin 114 (2002): 43-50.

Hold a nugget of Oregon sunstone in your palm, and you will understand why the 1987 Oregon legislature designated it as the official state gemstone. A feldspar member of the labradorite family, it is sometimes called red labradorite. Only in Oregon are sunstones found in fine gem quality. This gemstone …