The city of Adair Village is located in Benton County about seven miles north of Corvallis along Highway 99W. The name is derived from Camp Adair, a World War II training camp that encompassed more than 50,000 acres. The camp hosted as many as 45,000 troops and military personnel between 1942 and its decommissioning in 1946. A U. S. Air Force radar station operated on the site of the former camp headquarters from 1957 until 1969, and the Air Force facilities, along with a few surviving wartime structures, became the nucleus of Adair Village.

Residents of the defunct military base successfully formed their own city, which was incorporated in 1976 with a land area of about 40 acres. A few structures remain from Camp Adair; City Hall was housed in one until a fire destroyed it in 2003. One of the original fire stations, owned by Adair Village, served as a market and pub, but a fire damaged the building in 2006 and it is being rebuilt. The Oregon Department of Fish and Wildlife has a maintenance facility in Adair Village, and the office of the South Willamette Watershed District is located in the town.

The 1980 census recorded a population of 589, a figure that had declined to 536 by 2000. Since that time, residential construction, spurred by the operations of Hewlett-Packard a few miles to the south and a growing population of commuters who work in Corvallis or Albany, has raised the population to 840 (2010). 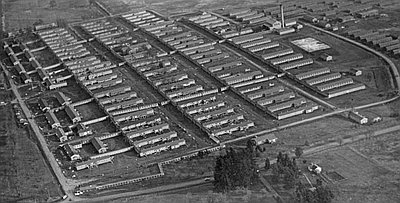 On December 22, 1944, the Sherman County Journal reported that about a thousand men of the 1687 Combat Engineers Battalion, the 558 Heavy Pontoon Engineers, and the 1490 Engineer Maintenance Company were encamped upriver from the small town of Rufus, about twenty-two miles east of The Dalles. At Camp Rufus, …