From February 1918 through the end of World War I, the 41st Division served in Europe, training and providing replacements for front-line units. Following the war, it became the National Guard division of Oregon, Washington, Idaho, and Montana. Its members trained for and performed military and civil support duties.

The 41st Division reached its greatest strength and readiness after war broke out in Europe and Asia in 1939, primarily because of the military leadership of Major General George A. White, adjutant general of Oregon and commander of the 41st Division. The U.S. Army and the National Guard were preparing for the possibility that the United States might become involved in the widening war.

After the United States entered the war in December 1941, the 41st Division conducted coastal defense duty from the Canadian border south into Oregon. In early 1942, the division, now the 41st Infantry Division, sailed for Australia as one of the first U.S. Army divisions sent overseas. Australians welcomed the 41st; most of Australia's troops were in Europe and the Middle East, and Japan was threatening from the north.

The 41st Division completed jungle and amphibious training in Australia before heading into the combat zone at Papua, New Guinea, in December 1942. In April 1944, the division made amphibious landings at Hollandia and Aitape, where resistance was minor. It was part of the U.S. military's "island-hopping" campaign, attacking or bypassing Japanese-occupied areas as it pressed west and north across the South Pacific.

The division's bloodiest engagement was on the island of Biak, off New Guinea's coast. Oregon's 162nd and 186th regiments defeated over ten thousand well-entrenched and well-led Japanese forces. The campaign extended from May through August 1944, and the 41st earned a new title, "The Jungleers."

In February and March 1945, the 41st Division landed at Zamboanga and Palawan in the southern Philippines. In August, the soldiers were preparing for the invasion of Japan when the U.S. dropped atomic bombs on Hiroshima and Nagasaki and the Japanese surrendered. The division performed occupation duty in the Kure-Hiroshima area of Japan until December 31, 1945.

In 1946, the 41st reorganized as the Pacific Northwest's Army National Guard division. In the 1960s, it was given a national defense mission of protecting Alaska, and the troops trained in northern operations. When the division was deactivated in 1968, its heritage and insignia passed on to the 41st Infantry Brigade of the Oregon Army National Guard.

The shoulder-sleeve insignia of the 41st is a red half-disk with a yellow setting sun over a blue baseline representing the Pacific Ocean. It is the basis for the name "Sunset Division." On January 17, 1946, U.S. Highway 26, from Portland to Seaside, was named the Sunset Highway in the division's honor. 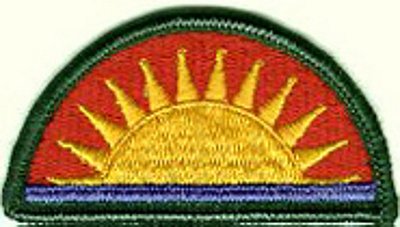