Manuel Izquierdo, who arrived in Portland in 1942 as a teenaged refugee from wartime Europe, established himself as a major Oregon sculptor and printmaker in a career spanning six decades. Particularly noted for his welded metal forms, he also created sculpture in cast metal, wood, stone, and ceramic. As a printmaker, he specialized in woodcut.

Manuel Izquierdo Torres was born in 1925 in a working class barrio in Madrid, the oldest of three children of an artisan family. His father was a bricklayer, his grandfather a cabinetmaker. Following the outbreak of the Spanish Civil War in 1936, he and his brother and sister were evacuated with other children to France where they spent several years in refugee camps and hostels. Manuel, for a time, attended the Ecole des Beaux-Arts in Marseilles. During World War II, he and his siblings immigrated to Portland with the support of the American Friends Service Committee. (His father later came to Portland from Spain; his mother’s fate is unknown.)

Izquierdo enrolled at Washington High School and befriended the son of Lloyd Reynolds, the calligrapher and wood engraver who taught at Reed College. He studied printmaking with Reynolds and sculpture with Hilda Morris, and later enrolled at the Museum Art School (now Pacific Northwest College of Art). There he studied sculpture with Frederic Littman and printmaking with William Givler and Louis Bunce. Jack McLarty, Albert Runquist, Michele Russo, and Rachael Griffin were also his instructors. He completed the program at the school in 1951 and took a teaching position there. He retired in 1997 after 46 years on the faculty.

Izquierdo’s experiences in his grandfather’s woodworking shop resulted in a life-long interest in making wood sculptures and carving wood blocks. Contact with the American sculptor David Smith, who visited Portland in 1952, expanded his interests to metal, a material he had worked with as a riveter in the Kaiser shipyards in the 1940s. Welded steel and later welded bronze became his primary sculptural media. Inspired by the work of Smith and European moderns, including the Spanish artists Julio González and Picasso, Izquierdo developed a highly original style that resonates with Surrealism and Expressionism.

The Dreamer, a bronze sculpture installed in 1979 in Portland’s Pettygrove Park, typifies Izquierdo’s work in metal. It is a flowing, abstract form poised on a geometric base sited in a pool of water. Organic and voluptuous, it is a modern river goddess. Izquierdo’s faultlessly drop-welded seams (internal to the work and thus invisible) give the piece a taut clarity despite its sensuousness. In contrast to the abstraction of his sculptures, his prints are generally figurative and narrative.

Izquierdo exhibited in twenty-five solo exhibitions in Oregon, Washington, and California and in numerous group shows, including the 1973-1974 “Art of the Pacific Northwest” organized by the National Collection of Fine Arts. He completed twenty-seven public and corporate sculptural commissions. His sculpture and woodcuts are owned by the Metropolitan Museum of Art, Philadelphia Art Museum, Portland Art Museum, Henry Gallery (University of Washington), Seattle Art Museum, Hallie Ford Museum of Art (Willamette University), Reed College, Jordan Schnitzer Museum of Art (University of Oregon), and many other institutions and individuals.

Manuel Izquierdo received the Oregon Governor’s Arts Award in 1991, and PNCA named a gallery in his honor. Illness ended his career several years before his death on July 17, 2009. 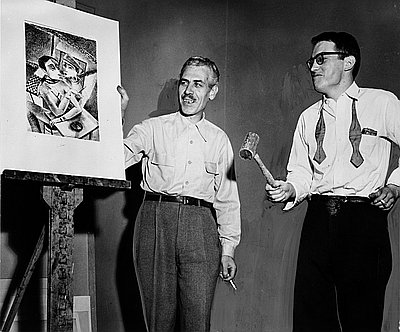 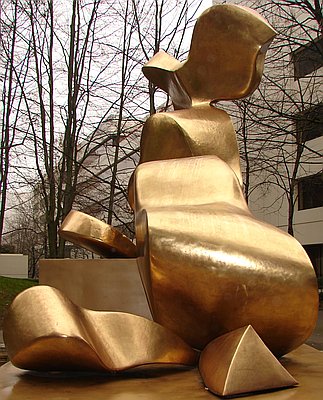 Frederic Littman may have single-handedly revived the fine art of sculpture in Oregon. During the thirty years before his arrival in Portland in 1941, few active sculptors were working in the state. Through four decades of extensive public and private art commissions, teaching activities, and exhibitions, Littman left a towering …

Hilda Grossman Deutsch Morris was an influential modernist sculptor associated with the Northwest School, a movement of artists that began in the Seattle area in the mid-twentieth century. She exhibited regionally and nationally, maintaining close ties to the New York art world throughout her career. Her sculptures—The Ring of …

William James “Jack” McLarty, one of Oregon’s veteran modern painters, was born in 1919 in Seattle but grew up in downtown Portland, helping his parents operate a succession of small working-class hotels. Except for brief periods, he lived in Portland for the rest of his life, and the city as …