Frederic Littman may have single-handedly revived the fine art of sculpture in Oregon. During the thirty years before his arrival in Portland in 1941, few active sculptors were working in the state. Through four decades of extensive public and private art commissions, teaching activities, and exhibitions, Littman left a towering artistic legacy to Oregon.

Born in Hungary in 1907, Littman lived with relatives after the death of his father in World War I. At age seventeen, while living with an uncle who was an art collector, he was inspired by illustrations he saw in his uncle’s art magazines. He acquired plasticene and began sculpting female nudes; he displayed his work in his home. A family friend saw them and encouraged Littman to enroll in the National School of Fine Arts in Budapest, where he studied for a year.

In 1925, Littman moved to Paris to study at the Académie Julian. The move was primarily motivated by his love of French art, but also by the anti-Semitic sentiment he encountered in Budapest.

In 1926, Littman was accepted at the prestigious École Nationale des Beaux-Arts and exhibited at the Salon d’Automne. He entered the Académie Ranson in 1931 and became a student assistant to Charles Malfray. At about the same time that he achieved full professorship in 1934, Littman received criticisms from Aristide Maillol, an indication that his work had earned the respect of highly esteemed artists.

In 1940, like many Jewish artists, writers, and intellectuals, Littman fled the growing holocaust in Europe with his new wife, sculptor Marianne Gold, whom he had met at the Académie Ranson. Soon after arriving in New York, he had an exhibit at the Lilienfeld Gallery and accepted an artist-in-residence position at Antioch College.

In 1941, Littman moved to Portland, where he was artist-in-residence at Reed College, a position he would hold until 1945. The following year, he became an instructor of sculpture at the Museum Art School, where he taught until 1960. He had the first of three one-person exhibitions at the Portland Art Museum in 1945.

It was during the late 1940s to the early 1950s that he began to consult with architects on major commissions. He was a pioneer in this type of collaboration and won a citation for that work from the Oregon chapter of the American Institute of Architects. He also completed two commissions from Pietro Belluschi, including the doors for Zion Lutheran Church in Portland. In 1960, he was named associate professor of art at Portland State University (PSU). He attained full professorship in 1966 and retired from PSU in 1973.

Littman’s work can be described as romantic, impressionistic, and figuratively based. Later in his career, he experimented with more reductive and abstracted forms, though he rarely executed nonobjective works. While he was greatly influenced by Maillol, his work owes more to Rodin, Maillol’s teacher. Littman's preferred subject matter throughout his career was the female nude, though he used no models and chose to work from memory.

Perhaps even more enduring than his many works of art is his profound influence on subsequent generations of sculptors in Oregon. Littman's students included James Lee Hansen, Manuel Izquierdo, Charles Kelly, Lee Kelly, and Donald Wilson. His works can be seen in Portland at Temple Beth Israel, Council Crest Park, and the Portland Art Museum and at the Marion County Courthouse in Salem. 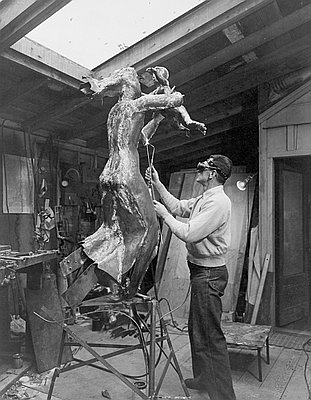