The Hallie Ford Museum of Art at Willamette University has only been in existence since 1998, but it has quickly established itself as a venue for displaying the work of Northwest and Native American artists, as well as significant historical exhibitions. Critics and artists alike recognize the Salem museum as a strong supporter of Oregon and Washington artists.

Faculty curator and art historian Roger Hull and museum Director John Olbrantz have curated major solo exhibitions for such Northwest artists as Fay Jones, Carl Hall, Charles Heaney, George Johanson, and Harry Widman; and anthropologist and faculty curator Rebecca Dobkins has helped the museum forge a strong relationship with Native artists. In 2005, for example, Toi Maori Aotearoa selected Salem as one of three cities in the world to display an exhibition of intricate weavings of New Zealand’s Maori people; and in 2008, Dobkins curated The Art of Ceremony, an unprecedented exhibition of ceremonial regalia for the nine recognized Oregon tribes. The museum’s third faculty curator, art historian and archaeologist Ann Nicgorski, has strengthened the collections and exhibitions in ancient and medieval art.

In 1990, Mark and Janeth Sponenburgh donated 250 art objects to Willamette University, which set the stage for discussions, led by Hull, about creating a museum. Willamette had a legacy of teaching art since the nineteenth century and was host to noted art professors Carl Hall and Constance Fowler. That commitment to art—along with the university’s collection of French Barbizon paintings and nearly 260 Native American baskets acquired in the 1940s—helped support the argument for a museum. A $2 million donation from philanthropist Hallie Ford brought the idea to life.

In 1996, Willamette purchased a 27,000-square-foot building on the corner of State and Cottage streets, one block west of campus. Jon Wiener, of Soderstrom Architects in Portland, redesigned the interior of the 1965 building. The new museum opened in October 1998 with two temporary and four permanent galleries: the Carl Hall Gallery for historic and modern regional art; the Confederated Tribes of Grand Ronde Gallery for Native American baskets; the Mark and Janeth Sponenburgh Gallery to house a study collection of European, Asian, and American art; and the Print Study Center for a collection of works on paper. John Olbrantz was the first director, and he leads the museum today.

The museum hosted its first significant historical art exhibition in 2000, The Best of Both Worlds: Human and Divine Realms in Classical Art, a collection of Greek and Roman works from the Museum of Fine Arts in Boston. In the Fullness of Time: Masterpieces of Egyptian Art from American Collections, organized by Olbrantz and Egyptologist James Romano, followed in 2002.

The Hallie Ford Museum of Art hosts lectures, films, panel discussions, artist demonstrations, and workshops. The museum has published eleven books and monographs and co-published two books to accompany exhibitions. At least a dozen exhibitions have traveled to other regional and national museums. The museum has a full-time staff of eight and about 30,000 visitors a year. 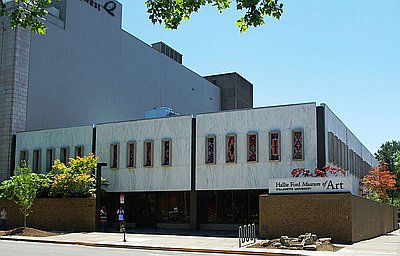 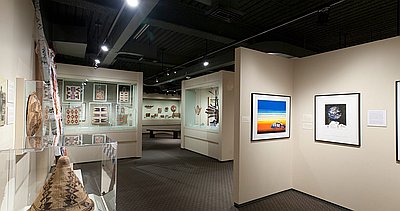 Hallie Brown Ford was a philanthropist who gave millions to support the arts at institutions in Oregon and Oklahoma and established scholarships through a foundation, now known as the Ford Family Foundation, that she and her husband created in 1957. Her gift of $15 million to the Pacific Northwest College …

Manuel Izquierdo, who arrived in Portland in 1942 as a teenaged refugee from wartime Europe, established himself as a major Oregon sculptor and printmaker in a career spanning six decades. Particularly noted for his welded metal forms, he also created sculpture in cast metal, wood, stone, and ceramic. As a printmaker, …

Artist Maude Wanker is perhaps best known for her prowess in watercolor. She was a founding officer of the Oregon Amateur Watercolor Society and the Master Watercolor Association, serving as president of both organizations.