Opened in May 1912 to serve the traveling public and capitalize on Portland's burgeoning convention business, the Hoyt Hotel at Northwest Sixth Avenue and Hoyt Street was advertised as modern and fireproof. It "operated in a first class manner,” the Oregon Journal reported, “with modest prices." For the next six decades, the Hoyt served Portland, and from 1963 to 1972, it was the scene of a round-the-clock extravaganza.

The six-floor, steel-reinforced concrete structure was in easy walking distance of Union Station and the Oregon Electric Railway's North Bank Depot, at Eleventh and Hoyt. Rates in 1912 started at 75 cents a night ($19.70 in 2018 dollars). Six weeks after opening, the entire hotel was rented by the California Orange Belt Elks, who arrived in Portland by special train for the Grand Lodge Reunion. By 1934, fifty rooms had been set aside for permanent guests, offered "at a price you can afford to pay, $3.50 weekly, $12 and up monthly."

Industrialist Harvey Dick acquired the hotel in December 1941 to use as a wartime recruiting tool for his Columbia Steel Casting plant. Potential workers exiting Union Station were greeted with signs reading “Workers Wanted. Rooms” and were offered free beer in the Hoyt's bar before being approached by representatives of the Kaiser shipyards and Willamette Iron and Steel. "You couldn't find a place to sleep in Portland for love or money,” Dick reminisced. “We told them they could have a place to stay at the Hoyt but they would have to sign up for work in the foundries. Kaiser may have paid their way out here…but I gave them a place to sleep.”

Dick sold the Hoyt in 1945 to the Monarch Hotel group for $250,000, and within two years it was operated by Earle Hotel System. Food and drink were available at the New 525 Restaurant and the Hoyt Tavern, and newspaper advertisements emphasized its location by asking “Why Ride to Work?” By 1956 the Hoyt was owned by Milner Hotels, a nationwide chain of low-priced hotels. Two years later, Milner converted fifty rooms to provide room and board for elderly tenants displaced by the South Auditorium Urban Renewal Project. In the early 1960s, 150 resident lodgers, many of them railroad workers, paid a dollar a day for a room (about $8 in 2018 dollars).

Dick reacquired the Hoyt through foreclosure in 1962 and renovated it at $1,500 per room ($12,600 in 2018 dollars). He opened a new restaurant, the lavishly decorated 1890s-themed Barbary Coast, and by the mid-1960s the twenty-four-hour restaurant served three thousand meals a day. The lounge was gaslit by Tiffany lamps and filled with antiques and paintings, some reputed to be by Old Masters, others purchased from thrift stores. The luxurious woman’s restroom, the Salon of Feminine Solacement, had floors of Carrara marble quarried in Italy. Opening day was celebrated with a performance by Oregon Symphony harpist Marion Fouse. The Men Only Saloon had a separate entrance and paintings of female nudes, discretely curtained. A trough of water ran beneath a steel grate in front of the bar.

The Hoyt was a “giant nickelodeon,” Dick said, a showcase for his imagination. Gasfed flames shot from the rooftop "Pyrohedron," a thirty-foot-tall aluminum tower next to a huge red neon sign. National exposure was provided on the TV show Petticoat Junction by a mock steam locomotive, originally made for the movie Ticket to Tomahawk that Dick loaned to CBS in exchange for the credit. Radio station KLIQ broadcast from the lobby, careful not to catch on microphone the profanity-spewing mynah birds at the front desk. Gaslit streetlamps illuminated the sidewalks.

As “The Poor Man’s Hilton,” the Hoyt had a strict “first come, first served” policy, rescinded only once, for Senator Wayne Morse. Oregon Journal columnist Doug Baker described its late-night scene in 1965: “Longshoreman, railroad workers and cops sit cheek and jowl with the mink coat set….Whenever there is anything to do in the city, the Barbary Coast is the center of activity.”

In the Roaring Twenties nightclub, which opened in the annex in 1965, impresario Gracie Hansen produced Las Vegas-style cabaret reviews and welcomed performers such as Count Basie, Duke Ellington, and Woody Herman. Variety acts and drag shows, including a Halloween Drag Ball that drew six hundred participants, were part of the entertainment. Visiting celebrities included Frank Sinatra, Johnny Carson, Jane Russell, and Vincent Price. The Roaring Twenties’ men’s restroom was famed for its waterfall and “droll effects” that encouraged marksmanship, including a statue of Fidel Castro whose eyes lit up on a direct hit.

Business began to decline in 1969. Tastes were changing, and there was an economic downturn with a decline in tourist traffic after 1971, when Amtrak service left Portland with a single, tri-weekly, long-distance train. The Roaring Twenties room closed on July 15, 1972, and the hotel and Barbary Coast followed on August 2. Dick failed to find backing to reopen the Hoyt, and on November 16, 1972, there was a three-day auction of the Hoyt’s furniture, fixtures, and decorations in the Roaring Twenties room.

The Hoyt was purchased in 1973 by Multnomah County for $583,802. After plans for using it as office space fell through, the building was demolished in June 1977. The block remains vacant. 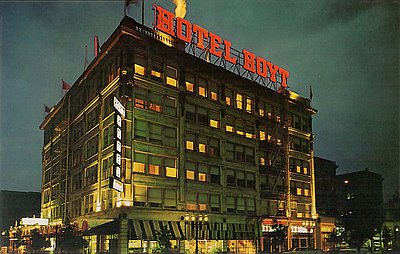 The Hoyt Hotel, post 1965
The low-rise attached structure to the left, topped with statuary, held the Roaring Twenties nightclub. The Barbary Coast restaurant’s entrance is in the main building, on its far right. From the roof, flames shoot from the 30 foot tall Pyrohedron, originally built for the 1959 Oregon Centennial Exposition. The gas lit streetlights, once intended for Harvard University, were used in Philadelphia.
Courtesy Dan Haneckow 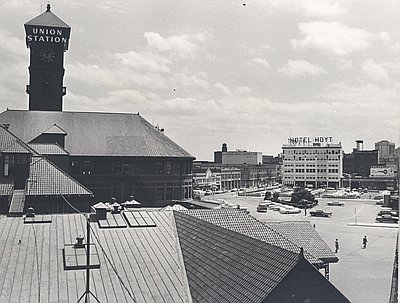 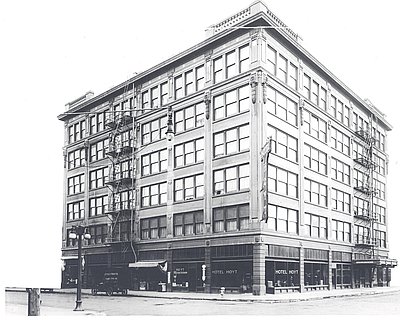 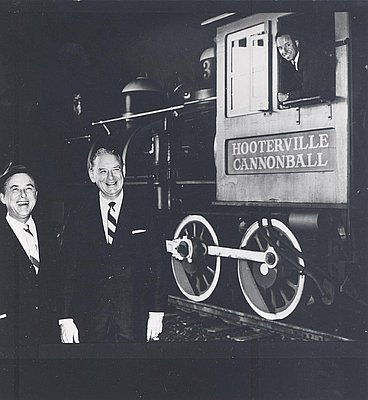 For being a little over five feet tall, Gracie Hansen stood out in a crowd. Maybe it was her wild boa, her hat creations, or her contagious laugh. It could have been the jokes she told. She believed in the best for everyone, which compelled her to run for governor …

At their peak at the end of 1942, the shipyards in the Northwest employed 97,000 workers, including many migrating from outside the region. The …