The Guild Theater in downtown Portland is the last survivor of the city's Midtown Blocks entertainment district that dazzled audiences in the 1930s and included the Heilig, Empress, Liberty, and Majestic theaters. In the twenty-first century, the former movie house, at 829 Southwest Park (9th) Avenue, stands vacant, rusting, and neglected, like an architectural orphan, surrounded by gleaming office buildings, hotels, and shops. In the early 1950s and 1960s, however, the Guild made front-page news when the owners challenged the city’s restrictive censorship laws and the power of citizen film-review boards to dictate what films or portions of films the public could view.

In June 1950, theater-owner J.J. Parker successfully defied the Portland Municipal Board of Review by refusing to delete a two-minute brothel scene in the Italian film The Bicycle Thief. A decade later, in April 1960, the Guild was in the news again when it tested Portland City Council’s anti-obscenity ordinance, which empowered the Police Bureau to confiscate the film The Lovers. In both instances, attorneys for the theater prevailed in court. In September 1961, the Oregon Supreme Court sided with the theater and struck down the city’s censorship ordinance as unconstitutional. The rulings in both cases set the stage for a decade of legal battles between other Oregon theaters and cities over the definition of obscenity and the free speech rights of filmmakers and theater operators.

Designed by Luther Lee Dougan, the 450-seat building opened in 1927 as the Studio Theater, primarily as a recital hall for music and drama students in the adjoining 5,000-square-foot Studio Building, noteworthy for its busts of classical composers on the exterior. Audiences entered the theater through the Studio Building to find a simple, unadorned, but acoustically sharp auditorium. The performance stage and the screen for occasional silent movies were located in the current lobby.

On October 25, 1931, the theater began showing talking films, mostly French, German, Italian, and Russian. The following year, the name was changed to the Taylor Street Theater by a resident performance group that offered live plays. When the J.J. Parker theater chain purchased the building in 1947, Parker renamed it the Guild Theater. Three years later, the theater grabbed headlines with its protest of Portland’s arbitrary censorship code.

During an extensive remodeling effort in 1956, the Guild's entranceway was moved to Park Avenue, creating a rare reverse theater, one in which the audience entered at the front of the auditorium, next to the stage. It also featured a single aisle in the middle of the auditorium, rather than the more traditional double-side aisles.

Tom Moyer purchased the Guild in the early 1980s as part of his Luxury Theater chain and then sold the theater in 1989 to Act III Cinemas—today part of the Regal Cinema chain—while maintaining ownership of the property. The nonprofit Northwest Film Center leased the building from 1998 to 2006 as a venue for its popular film festivals. Critics often complained, however, that the ceiling was too low, the acoustics were uneven, and access to the bathrooms, located in the Studio Building, was difficult. When Moyer’s TMT Development began work on an underground parking garage adjacent to the theater and beneath Director Park in 2006, the theater closed. It was boarded up in 2008.

Since then, several arts organizations, including the Opera Theater of Oregon, retailers, and restaurateurs have proposed redeveloping the building. But costs for mechanical, electrical, seismic, and plumbing upgrades—estimated at $2 million—have discouraged most investors. Moyer family members maintain ownership of the building through TMT Development Company. 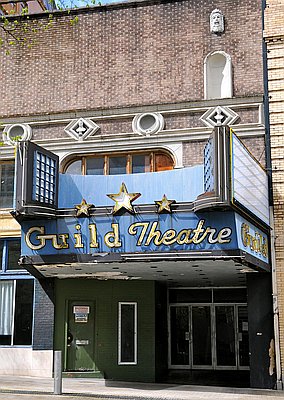 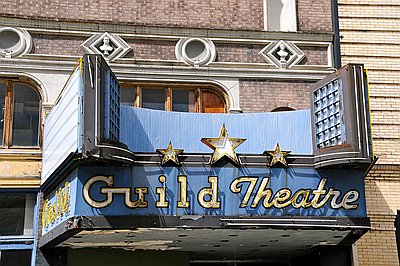 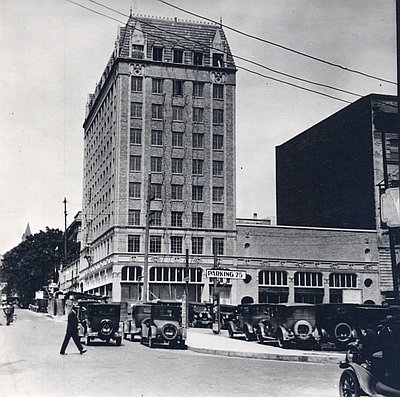 When fourteen-year-old Virginia Katherine McMath, better known as Ginger Rogers, danced onto the stage of the Craterian Theater on April 21, 1926, she dazzled Medford audiences. Many years later, on November 21, 1993, the sixty-seven-year-old actress was on the same stage to urge residents and business leaders to save the …

On July 17, 1926, Claude C. Jensen and John G. von Herberg, owners of a string of over thirty silent movie theaters from Los Angeles to Seattle, opened the 1,500-seat Hollywood Theatre with great fanfare as a companion to their ornate Liberty Theatre in Astoria, Oregon. Rose City Park residents …

La Grande businessman Stephen Gardinier and his wife Madeline opened the two-story Liberty Theatre in 1910—originally named the Orpheum, and later the Arcade—to capture the silent movie craze sweeping the nation and to provide a first-class venue for vaudeville shows traveling the West Coast. The commercial-style building, with its solid …