The Venetian’s storied history begins in 1911, when former gold miner and semi-pro baseball player Orange “Pappy” Phelps purchased the 200-seat Grand Theater on Main Street in Hillsboro, Oregon. In 1916, with America's entry into World War I looming, he changed the name to the patriotic-sounding Liberty Theatre. The two-story building was only 19 by 120 feet, but crowds filled the auditorium for favorites such as Snow White, The Wonderful Wizard of Oz, Peter Pan, and The Hazards of Hazel, a weekly serial.

In 1921, Phelps was elected to the Hillsboro City Council. He would serve as council member and then mayor for fourteen years.

When talkies replaced silent films, Phelps added Vitaphone, a sound-on-disc process in which recorded voices and music were synchronized with film. On April 29, 1929, a reported one thousand customers squeezed into the theater to see and hear the Academy-award winning musical, The Broadway Melody.

During the Great Depression, Phelps began a tradition of offering free films and live entertainment on Christmas Day. The tradition would last for fifty-six years. Movie attendance surged in the 1940s, and when audiences turned to radio and television in the 1950s, Phelps held on to loyal fans by adding live performances, fashion shows, cooking demonstrations, and high school graduations.

On September 8, 1956, fire broke out in the basement, leaving the Venetian in a pile of rubble. While the city was stunned by the loss of the landmark, the optimistic Phelps turned his attention to rebuilding. Within a year, he reopened the theater under a new name, the Town Theater.

In 1976, Phelps—then in his nineties— turned over operations to his son Vincent. Two years later, the younger Phelps sold the theater to Tom Moyer Luxury Theaters. Act III Cinemas took over in 1989, followed by Regal Entertainment Group. By 1996, the building had fallen into such disrepair that it was shuttered and sold to the city for $1,500. A panel of business and civic leaders suggested converting it and an adjoining city-owned building into a performance hall, but the city balked at the $2 million price tag.

By 2007, the theater was slated for demolition. The city offered the building to developer Denzil Scheller for $10, along with a grant of $750,000 to remove layers of asbestos, retrofit it for earthquake protection, and bring it up to city code.

Scheller paired the money with a $250,000 grant from Metro and an estimated $1.5 million of his own money for a complete makeover. On July 9, 2008, the renamed Venetian opened as an elegant performing arts center with a bright neon marquee, a red tile roof, a wrought-iron balcony, a 370-seat auditorium, and a European-style bistro.

In 2010, the Venetian was awarded the state's Outstanding Achievement in Design Award. Bag & Baggage became the resident theater company in 2011. Since reopening, the theater has become the centerpiece of downtown revitalization efforts. 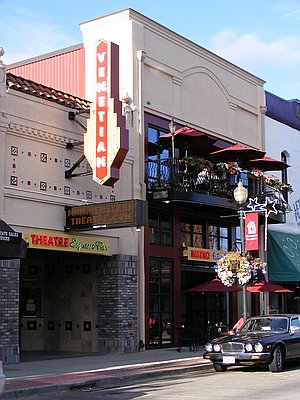 Hillsboro, the seat of Washington County, is in the Tualatin River Basin west of Portland. The earliest people in the area were Atfalati, who gathered at Chatakuin—today’s Five Oaks—to settle disputes, arrange transactions, and carry out community affairs. The first Europeans and Americans arrived in the late 1830s: retired Hudson’s Bay …