When fourteen-year-old Virginia Katherine McMath, better known as Ginger Rogers, danced onto the stage of the Craterian Theater on April 21, 1926, she dazzled Medford audiences. Many years later, on November 21, 1993, the sixty-seven-year-old actress was on the same stage to urge residents and business leaders to save the aging movie house.

On that afternoon and in the weeks that followed, the one-time dance partner of Fred Astaire delighted crowds with Hollywood stories and helped raise over $100,000. When Rogers died on April 22, 1995, local fans collected over 3,000 signatures and persuaded the Medford City Council to rename the building the Craterian Ginger Rogers Theater. With its inviting courtyard, shaded benches, and art deco exterior, the theater has become the cultural linchpin in revitalization efforts for downtown Medford.

Constructed by Porter J. Neff and J.H. Cooley (organizers of the Medford Theater Company), designed by Frank C. Clark, and leased to George Hunt, who had operated the city's Page and Rialto theaters, the 1,100-seat theater at 8th Street and Central Avenue opened on October 20, 1924, primarily to host vaudeville shows. The building’s stucco exterior was meant to replicate a Spanish villa enhanced with Renaissance furnishings.

The grand staircase appeared to flow to the second floor, designed to mirror the grandeur of the lobby. On the upper level, men enjoyed a smoking lounge, while mothers could watch films in two glass-enclosed rooms and "babies may cry to their hearts content." The theater offered a room for private parties, dressing rooms beneath the stage, and the West Coast’s first hydraulic-lift organ elevator, complete with a 3-manual Hope Jones Wurlitzer. When Hunt offered a $25 prize to name the theater, he received 1,500 entries. He chose Craterian in honor of Crater Lake.

An innovator, Hunt spent about $20,000 for the city's first Vitaphone and Movietone projectors in 1928, predicting accurately that talkies would replace silent movies. In 1936, amid weeks of extensive publicity, Hunt completely remodeled the interior of the theater from the foyer to the auditorium. He continued to run the theater until August 1943 when he was killed in an automobile accident.

The Craterian received a major publicity boost in 1946 when 18,000 people attended the premier of Canyon Passage, which had been filmed in the area. When horror and 3-D movies became the vogue, the theater drew in crowds by offering a $1,000 life insurance policy against anyone frightened to death during a showing.

During the 1960s and 1970s, televisions and drive-in theaters pulled customers away. The historic theater closed its doors to films in 1985 and was donated to the Rogue Valley Art Association in an effort to encourage its redevelopment into a playhouse for live community theater. In 1989, residents, arts patrons, and business leaders formed the Craterian Performance Company and convinced over 600 contributors and organizations to pledge $5.2 million toward that effort.

Two years before her death, Ginger Rogers, the Oscar-winning dancer and actress and a resident of nearby Shady Cove, entertained a packed crowd in the theater and re-introduced what she said was her favorite film, Roxie Hart, which first played at the Craterian in April 1942.

Reconstruction of the theater began in 1996, and the 732-seat building reopened on March 1, 1997, as the Craterian Ginger Rogers Theater, with a modern sound system, new dressing rooms, and a studio lab. A full calendar of local, regional, and national acts have been booked since then. In 2012, the theater was renamed the Craterian Theater at the Collier Center for the Performing Arts in honor of local philanthropist James Collier. The stage is named for Ginger Rogers. 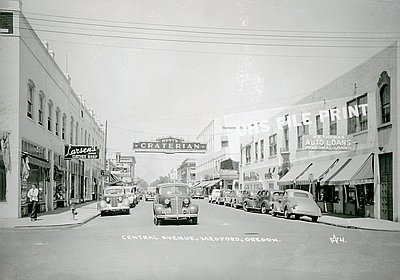 The Guild Theater in downtown Portland is the last survivor of the city's Midtown Blocks entertainment district that dazzled audiences in the 1930s and included the Heilig, Empress, Liberty, and Majestic theaters. In the twenty-first century, the former movie house, at 829 Southwest Park (9th) Avenue, stands vacant, rusting, and neglected, like …

La Grande businessman Stephen Gardinier and his wife Madeline opened the two-story Liberty Theatre in 1910—originally named the Orpheum, and later the Arcade—to capture the silent movie craze sweeping the nation and to provide a first-class venue for vaudeville shows traveling the West Coast. The commercial-style building, with its solid …

Spencer S. Bullis organized the Southern Oregon Traction Company (SOTC) on July 15, 1913, to operate streetcars in the city of Medford. Three years later, the SOTC incorporated the Rogue River Valley Railway's (RRVR) line (founded in 1891) between Medford and Jacksonville. Though even the expanded SOTC did not achieve …