Chief Kiesno (his name has also been spelled Keasno, Casino, Kiyasnu, Q’iesnu, Ciasno, Cassino, and Cassinov) was an important Multnomah-Wakanasisi Chinookan leader in the Wapato Valley (Portland Basin). Throughout the fur trade era (1810-1840s), he had the respect of the Hudson’s Bay Company, the Pacific Fur Company, and the North West Company. Well connected through intertribal marriage to other groups on the Columbia and Willamette Rivers, he was the highest profile leader west of the Cascades from 1830, when Chief Concomly (Chinook) died, until his death in 1848.

The Wapato Valley people occupied a large area at the confluence of the Columbia and Willamette Rivers, including the Multnomah and other villages on Wapato Island (today’s Sauvie Island) and Cathlapotle and its neighbors in present-day Clark County, Washington. Kiesno’s principal village was Gatlakmap (Cathlacumup, Wacomapp) in the vicinity of present-day St. Helens. He also had direct influence over Nayaguguwikh (Niakowkow, Nayakaukauwi) at the mouth of Multnomah Channel and Wakanasisi on the north bank of the Columbia, downriver from Fort Vancouver.

Kiesno maintained political influence over the Wapato people and had ties with neighboring groups—including the Clackamas Chinook near Willamette Falls, the Cascades Chinook at Cascade Rapids, and the Tualatin Kalapuya in the Willamette Valley—taking advantage of those connections when needed. In August 1813, for example, the Cathlacumups and “70 warriors from some of the neighboring tribes” fended off an attack by seven canoes of Clatsop-Nehalem. In April 1814, when an incursion of forty canoes of Cowlitz and their allies entered the Columbia River, Kiesno called for aid from “Indians at the Falls of the Willamette, [and] the Calleporeyours,” and the defense of the Wapato Valley Chinook territory was successful.

Native leaders in the region had a practice of arranging marriages in order to marshal political influence and maintain peaceful trade relations. Kiesno had as many as ten wives and numerous slaves, demonstrating his wealth. He married Illchee, Chief Concomly’s daughter, after her husband, fur trader Duncan McDougall, left her. Intermarriage connected him closely with peoples from the mouth of the Columbia to the Cascades and up the Willamette River, as well as to fur traders.

In January 1814, Kiesno accompanied fur trader Alexander Henry on a recovery mission to the Cascades (Watlala) people. There, he kept the peace between Astorians and the Cascades people, who had recently killed some fur traders and stolen their guns and camping equipment. The fur traders stopped on Wapato Island, where they asked Kiesno, who had relatives at the Cascades, to help with the negotiations. Using threats and in heated discussions, Kiesno and the fur traders negotiated the return of most of the stolen implements. Kiesno also met secretly with his Cascades relatives who lived on the north bank of the Columbia. The wife of Chinook Chief Coalpo warned the Astorians of Kiesno’s double dealing; and while Henry kept Kiesno along for his position and diplomatic skills, he thereafter watched him closely and distrusted him with their safety.

From the 1780s to the 1850s, there were numerous epidemics in the region from introduced diseases, including smallpox, malaria, influenza, dysentery, and measles. Decimation of the Native population allowed for the nearly unopposed invasion and resettlement by explorers, traders, pioneers, and northern tribes (Klickitat and Cowlitz) on the Columbia River. After the malaria epidemics of the early 1830s, Kiesno became a regular visitor to Fort Vancouver. He died there on December 10, 1848, and is buried in a Fort Vancouver cemetery. The obituary in the Oregon City Free Press reported that “in the prime of life, few or none of his neighbors could equal him in rank and affluence.”

After Kiesno’s death, the Wapato Valley people joined with the area’s Willamette Valley tribes and signed the Treaty with the Kalapuya Etc. in 1855. In January 1856, those people who were represented by the treaty signers were removed to the Grand Ronde Indian Reservation, including the surviving wife of Kiesno, Mary Ann Keosnose.

Kiesno was likely the inspiration for Chief Multnomah, a romantic figure who is at the center of Frederick Balch’s novel Bridge of the Gods (1890) and who was liberally reimagined in newspapers and theatrical performances into the twentieth century. The statue of Chief of the Multnomahs, by sculptor Herman McNeil, at the New York Metropolitan Museum of Art can be considered a romanticized image of Kiesno. 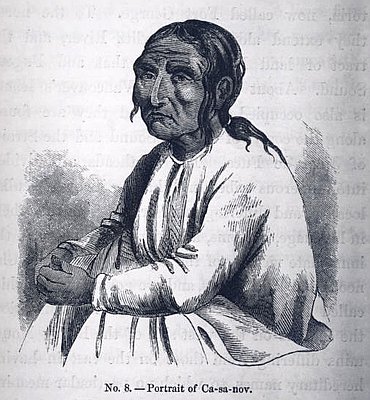 Harper, J. Russell, ed. Paul Kane’s Frontier, including Wanderings of an Artist among the Indians of North American.1971.