Of the several Chinook men called Concomly at one time or another, the most famous was the headman located on Baker's Bay, on the north bank of the Columbia River, during the late eighteenth and early nineteenth centuries. It was through the writings of fur traders and explorers who encountered the shrewd trader that he became the best known of those who bore the name.

Because he was thought to be about sixty years old in 1825, Concomly may have been born around 1765. His parents were probably a Quinault man and a Chinook woman, and he had Chehalis or Quinault relatives, or both. His wives were said to have come from villages along the Columbia and on the coast. He had at least three sons; and of his several daughters, some married white fur traders, while others married prominent Indian headmen including Coalpo, leader of a village near Fort Astoria.

Charles Bishop, a British fur trader who was trading at the mouth of the Columbia in 1795-1796, considered Concomly a second-rank chief. He described the headman's aggressive methods of acquiring furs from upriver people to trade for the desirable foreign goods. Ten years later, Lewis and Clark also called Concomly a secondary chief.

By 1811, however, when Fort Astoria was built, Concomly dominated the trade with EuroAmericans. Several traders at the fort described how he tried to prevent other Indian groups from trading directly with the foreigners by portraying each side as a threat to the other, thus requiring each to channel their goods through his hands. Marrying his daughters to EuroAmerican fur traders allowed him to acquire foreign goods, since a marriage required the exchange of valuable items.

One daughter married Duncan McDougall, head of Fort Astoria. After he left the area, she married Kiesno, an influential upriver chief. By 1825, the Hudson's Bay Company, by then in control of the fur trade, opened Fort Vancouver some hundred miles upriver. By then, Concomly and Kiesno, along with Shanaway, a Cowitz chief, were considered the most prominent Indians on the river. Kiesno, who was located near the new fort, gained influence at his father-in-law's expense. The outbreak of hostilities between them threatened trade with the Hudson's Bay Company, whose intervention calmed things down.

By 1825, Concomly had chosen the name Madsu for himself and given the name Concomly to the son who was to succeed him, but that son died. In 1830, he himself died of the malaria that was ravaging the lower Columbia, leaving Kiesno the most important chief on the river. In 1835, Concomly’s skull was taken to England for "scientific" examination; well over a century later, it was returned and buried in the Ilwaco, Washington, community cemetery.

It was someone else with the name Concomly who signed the unratified Tansy Point treaty in 1851. Nevertheless, it is the man known to the EuroAmericans of the early contact period who is best remembered. In Astoria, Oregon, a reproduction of a Chinook canoe stands as a memorial to him.

Ross, Alexander. Adventures of the First Settlers on the Oregon or Columbia River, 1810-1813. Lincoln: University of Nebraska Press, 1986. 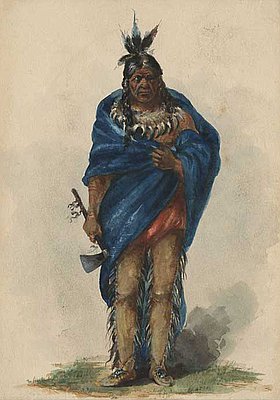 The Chinookan peoples of the Lower Columbia River built a variety of shelters, depending on season and purpose. The best known are plankhouses, post-and-beam structures built using Western red cedar posts and planks for walls, roofs, and sometimes floors. Chinookan plankhouses were part of a Native architectural tradition that in …

During the early nineteenth century, upwards of thirty Native American villages were documented in the Portland Basin (present-day Multnomah, Clark, Clackamas, and east Columbia Counties). Most of the villages were sited on riverbanks and in wetlands along the Columbia and Willamette Rivers and were occupied by people who spoke dialects of a …