Cathlapotle is the archaeological site of a major Chinookan town located in the Portland-Vancouver metropolitan area, at the place where Lake River, Gee Creek, the Lewis River, and the Multnomah Channel join the Columbia near Ridgefield, Washington. It was founded in its current location at about AD 1450. Of the fifty-five known and named Chinookan towns and villages along the lower Columbia River, from the Cascades to the mouth, Cathlapotle may be the best preserved and best known.

The people who lived in Cathlapotle were active in the fur trade with Europeans before the mid-1830s, and they and their town figure in many early accounts. The site, which has not suffered from development or significant looting, has been the focus of active archaeological and ethnohistorical research and public outreach since 1991 by Portland State University and the U.S. Fish and Wildlife Service. The project developed a wealth of data on life in the region between 1450 and 1830.

The site is four acres in area, with deposits ranging from three to more than six feet in depth. It contains remains of six western red cedar (Thuja plicata) plankhouses, in two rows paralleling Lake River. The larger houses are in the back row, the smaller in the front. The archaeological work at Cathlapotle emphasizes two structures: the largest house, which was about 180 by 33 feet, and the smallest, which was 40 by 26 feet. The four larger houses were divided into compartments; the two smallest houses were not subdivided.

Members of the Lewis and Clark Expedition counted fourteen houses at Cathlapotle. Archaeologists have identified fourteen to sixteen structures, including the compartments, all of them noted by Lewis and Clark. Researchers are still determining whether each house or compartment was home to a separate household or whether single, large households lived in the large, multi-compartment houses.

A distinctive and perhaps unique feature of Native houses in this area is the presence of extensive subfloor storage areas or cellars. The volume of the cellar of the largest Cathlapotle house was around 3,500 cubic feet, the equivalent of a space 15 by 15 by 15 feet; that of the smallest was about 1,800 cubic feet. These cellars were not a single, large space like a modern cellar, but trenches and pits beneath the house floors and sleeping benches.

Cathlapotle’s population was probably between 700 and 800 people, among the largest towns in the area. The large population was supported by a productive food-getting economy, and townspeople had ready access to rivers, streams, backwaters, wetlands, upland prairies, and the Cascade foothills. They made full use of this hinterland, hunting a wide range of animals but specializing in elk and deer. Their fish diet was diverse and included salmon, sturgeon, eulachon, suckers, and minnows. Vegetal foods included acorns, hazelnuts, camas, wapato, tarweed, and berries. Wapato, with a potato-like bulb, grew in dense stands in the wetlands and was the signature plant food for the area. Part of the purpose of the large cellars may have been for storing wapato.

The town’s people could closely monitor Columbia River traffic without being easily seen. This was clearly important. Cathlapotle is probably the most recent of a series of towns in this general area over the past two thousand years or more. The town moved as the Columbia shifted its course, but there was probably always a town or village in more or less the same location. The town also flooded regularly but was always quickly reoccupied and, when necessary, rebuilt.

The location was crucial. For centuries before Europeans arrived, Cathlapotle’s people were major players in trade along the river, and they played important roles in the fur trade between 1792 and the community’s dissolution in the mid-1830s. Archaeological evidence indicates that Cathlapotle’s precontact exchange connections extended west to the coast and south into northern California. Its links north and south are less clear, with the documentary record describing a complex trade in prestige and basic goods along the river, with wapato a major export of the Cathlapotle area.

Cathlapotle’s involvement in the fur trade began on October 29, 1792, when a flotilla of canoes and warriors from Cathlapotle intercepted two small boats from the Vancouver Expedition, the first recorded European vessels to sail up the Columbia. Fourteen years later, on March 29, 1806, Cathlapotle was visited by the Lewis and Clark Expedition, whose captains described the town at length in their journals. Cathlapotle is often mentioned in accounts after the expedition but never in the detail provided by Meriwether Lewis and William Clark.

The archaeology shows that the people of Cathlapotle were actively engaged in the fur trade. The townspeople increased their production of elk-hide armor, which fur traders then traded for sea otter pelts to groups who lived to the north on Vancouver Island and Haida Gwaii. At Cathlapotle, the highly prized armor—called clamons—were exchanged for European ceramics, beads, iron, copper, metal bangles, the occasional gun, and glass.

Cathlapotle residents also coped with a series of epidemics of smallpox and other diseases. The diseases may have reached the town as early as the 1770s-1780s, probably reducing populations by 30 percent or more. Despite this, Cathlapotle appears to have flourished through the 1820s. There are archaeological hints that Cathlapotle took in survivors of the epidemics from other communities. In the summer of 1830, the region was struck by what was then called fever and ague, probably malaria, which reoccurred in the summers following. The effects were devastating. Thousands died, and villages all along the river were abandoned. Cathlapotle was abandoned, probably by 1835. As much as can be detected from the archaeology, the abandonment was orderly.

As part of the public outreach by the U.S. Fish and Wildlife Service and Portland State University, a modern plankhouse was built on the Ridgefield Wildlife Refuge. The plankhouse, which was dedicated in 2006, is open during the summer months to visitors who want to learn more about Cathlapotle and Chinookan life in the region. 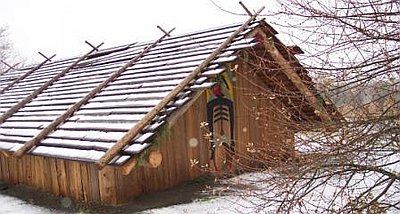