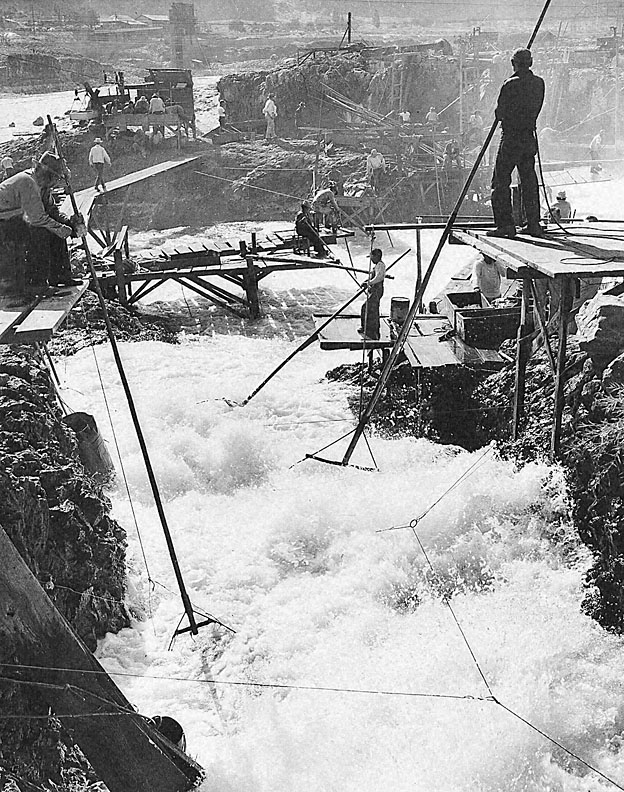 Celilo Falls (also known as Horseshoe Falls) was located on the mid-Columbia River about twelve miles east of The Dalles. It was part of an approximately nine-mile-long Indigenous fishery that included sites such as the Upper Dalles, the Lower Dalles, Three Mile Rapids, Five Mile Rapids, and Big Eddy.

At Celilo Falls, the Columbia's riverbed constricted to a passageway as narrow as forty feet across, producing what nineteenth-century observer Alexander Ross described as "great impetuosity” where “the foaming surges dash through the rocks with terrific violence." The rapids, which dropped the river more than eighty feet in a half-mile, required most boats and other vessels to portage but also created some of the most productive fishing sites in the Pacific Northwest.

Archeological records date human occupation of village sites along the falls to at least 11,000 years ago. The first written population records come from the journals of Meriwether Lewis and William Clark, who estimated in 1805-1806 that 7,200 to 10,400 Indian people were present between the Cascade Rapids and The Dalles. Abundant fish runs drew Indigenous people to permanent settlements in the area, and village populations fluctuated with seasonal movement. During the post-contact period, the numbers of people declined as a result of diseases that dramatically reduced native populations. Read the full Oregon Encyclopedia entry here

Harbarger, Molly. "Celilo's success might be path forward for Columbia River tribal housing - but it wasn't easy. The Oregonian May, 20, 2016.

Celilo Falls silenced by the Dalles Dam. University of Oregon

After examining and reading about the documents in this packet, answer the following questions: