The United States Exploring Expedition (1838-1842), also known as the Wilkes Expedition, was shaped by both commercial and scientific concerns and a desire to expand American influence and interests in the Pacific Northwest. Maritime merchants, sealers, and whalers needed accurate charts of islands and navigational hazards in the Pacific Ocean. Secretary of the Navy James Paulding wanted “to extend the bounds of science, and promote the acquisition of knowledge."

In 1818, the first negotiation with Great Britain on the Northwest boundary issue was concluded, and in 1821, Representative John Floyd introduced a bill to establish a military presence on the Columbia River in a newly created Oregon Territory. Although Floyd's bill was tabled, continued congressional agitation on American sovereignty in the Pacific Northwest prompted President James Monroe, in his December 1824 message to Congress, to ask for "appropriation of an adequate sum to authorize the employment of a frigate...to explore the mouth of the Columbia River and the coast contiguous thereto."

During the next decade, ongoing negotiations with Great Britain over partition of the Oregon Country and increasing concerns in Congress about British hegemony in the Pacific Northwest helped to shape what historian Philip Lundeberg called "the Expedition's most significant geopolitical undertaking, a comprehensive survey of the Oregon territory, extending from the Strait of Juan de Fuca to the Columbia River valley."

Congress authorized the expedition in May 1836, but inability to appoint a command and other obstacles delayed deployment for nearly two years. Finally, in March 1838, forty-year-old Lt. Charles Wilkes was selected to command a flotilla of six ships and nearly five hundred military and civilian personnel, including nine scientists. The expedition left Hampton Roads, Virginia, on August 18, 1838. It made extensive reconnaissance in the Southern Hemisphere, coasted about 1,500 miles of Antarctica, surveyed nearly 280 islands, and collected a prodigious number of artifacts.

On April 28, 1841, Wilkes arrived off the Columbia River bar but was unable to cross because of hazardous conditions. He proceeded to Puget Sound and Fort Nisqually. His negative impression of the accessibility of the river to a possible port ("Mere description can give little idea of the terrors of the bar of the Columbia") was reinforced by the later loss of the Peacock on the bar on July 18. His subsequent surveys of Admiralty Inlet and Hood Canal replicated the work of George Vancouver in 1792, but were “the first official U.S. hydrographical surveys of these waters.”

In the Willamette Valley, Wilkes met with settlers at the Methodist mission near Salem. Although the Americans hoped for assistance in establishing a civil government, Wilkes advised to “wait until the government of the United States should throw its mantle over them.” The third group traveled to the Sacramento Valley and joined Wilkes and the rest of the expedition in San Francisco on October 23.

While in Oregon territory, expedition members made contact with a number of Indian tribes and recorded some demographic information; observed behavioral information was often written with notable disrespect. However, valuable ethnographic data included the collection of nearly two hundred artifacts from the region and an extensive description of Chinook Jargon compiled by the expedition linguist, Horatio Hale. The Ex. Ex., as the expedition became known, returned to New York Harbor in June 1842.

Public appreciation of the expedition’s accomplishments was slow to occur. Some in the scientific community were unconvinced of evidence the expedition had gathered demonstrating that Antarctica was a continent. Accusations by Wilkes of incompetence and contempt against several junior officers led to countercharges against Wilkes. A court martial resulted in a reprimand of Wilkes on a charge of illegal punishment. President John Tyler and later President James Polk, fearful of disrupting negotiations on the northern boundary question, did not publicly embrace Wilkes’ strong opinion for United States control of all ports in Puget Sound. Even publication of Wilkes’ initial “Report on the Territory of Oregon” in June 1842 was officially delayed.

The scientific, political, and cartographic legacies of the Ex. Ex., however, were enormous. Approximately forty tons of collected material included about 4,000 zoological specimens, more than 50,000 plants, and thousands of ethnographic artifacts, fossils, gems, and corals. Most were placed in the newly constructed National Gallery of the Patent Office and later became foundation collections of the Smithsonian Institute. The immense written output of the expedition eventually comprised twenty-four volumes of reports and atlases, beginning with Wilkes’ own five-volume Narrative of the United States Exploring Expedition and atlas in 1844. The Ex. Ex. was responsible for many current topographical names in the Pacific Northwest.

An immediate political result of the expedition was its effect on deliberations between the United States and Great Britain on partition of the Oregon Country. Even before Wilkes reached the Pacific Northwest, HBC Chief Factor James Douglas wrote to George Simpson: “the anxiety felt by the American government about this country, and the desire of possessing it will….be increased by the report of this expedition.”

In June 1842, British negotiator Lord Ashburton wrote: “The exploring expedition just returned from a cruize [sic] of nearly four years brings a large stock of information about the Columbia River. The public is at present busy with this subject and little in a temper for any reasonable settlement.” Wilkes strongly advocated not only for American possession of the ports of Puget Sound, but also for American sovereignty in the Oregon Country to the disputed northern boundary of 54 degrees 40 minutes.

Wilkes’s nautical charts “formed the nucleus of the chart collection of the U.S. Hydrographical Office,” and the first printed maps appeared with his Narrative. His two-volume Atlas of Charts, completed in 1858, included forty-six harbor and river charts of the West Coast from the Straits of Juan de Fuca to San Francisco. Wilkes’s notable “Map of Oregon Territory…1841” included an inset survey from the mouth of the Columbia River to Fort Walla Walla and incorporated information from expedition members and from the accounts of Jedediah Smith, Peter Skene Ogden, and John Frémont’s expedition in 1842.

In August 1843, Wilkes was given official stewardship of the expedition’s collections and reports. For the next three decades, he advocated for yearly congressional appropriations to support their publication and distribution. He intermittently remained on active duty with the U.S. Navy and was promoted to rear admiral on the retired list in August 1866. Wilkes died on February 7, 1877, at the age of seventy-seven. 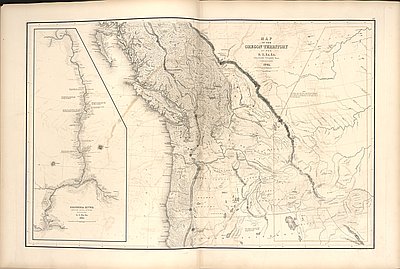 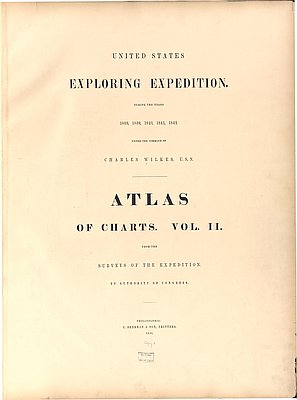 "The Publications of the U.S. Exploring Expedition, 1844-1874." The Smithsonian Institution. http://www.sil.si.edu/digitalcollections/usexex/follow-01.htm.

Built in 1805 near present-day Astoria, Fort Clatsop was the winter quarters for the Corps of Volunteers for Northwest Discovery, more commonly known as the Corps of Discovery or the Lewis and Clark Expedition. Sent by President Thomas Jefferson, the Expedition had as its assignment the exploration of the Missouri …