Built in 1813 in the New York Navy Yard, the Peacock was used to disrupt enemy trade, protect American merchantmen, and provide transportation for political officials. During the War of 1812, the warship and its crew won a notable victory against the British brig HMS Epervier. The Peacock was the ship used on a series of diplomatic missions to deliver ratified trade treaties to Arabia, Muscat, and the Kingdom of Siam (modern-day Thailand).

The Peacock was rebuilt in 1828 to make it suitable for exploration. The new ship was largely the same as the original, but with an armament of ten guns rather than twenty-two. The Peacock carried a crew of 130 men, displaced 680 tons, and measured 118 feet in length and 31.6 feet at her beam.

In 1836, after years of deliberation, Congress authorized the U.S. Exploring Expedition to expand scientific knowledge of the land and peoples of the Pacific Ocean. Nine scientists and artists joined the crews of the Peacock and five other ships of the expedition squadron, commanded by Lt. Charles Wilkes. The expedition embarked from Norfolk, Virginia, in August 1838 and sailed around Cape Horn and into the Pacific. For two years, the squadron surveyed the islands of the South Pacific and much of the coastline of Antarctica.

At midday on July 17, 1841, the Peacock attempted to enter the mouth of the Columbia River, where it ran aground on a sandbar. For twenty-four hours, the crew worked to right the ship. Watching the struggle from a nearby schooner, the Flying Fish, Midshipman William Reynolds wrote: “We were haunted by horrible fancies of drowning men & by the harrowing question of who, who shall we see on the morrow?” Finally, the Peacock’s captain, Lt. William Hudson, gave the order to salvage as many of the scientific materials and supplies as possible and to abandon the ship. Despite the danger of the situation, the crew suffered no casualties and only one injury.

Hudson and his crew evacuated to Fort George (present-day Astoria) until Lieutenant Wilkes arrived and purchased the brig Thomas Perkins as a replacement for the Peacock. The crew relocated to the new brig, renamed the Oregon, and continued on the expedition’s mission to gather natural, geographic, and cultural information about the Oregon Country. 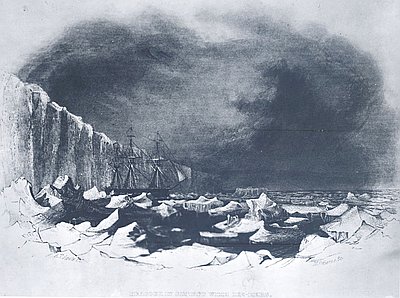 “Shipwrecks at the Mouth of the Columbia.” Columbia River Maritime Museum. http://www.mapbureau.com:8080/shipwrecks/index.html.

Bordwell, Constance. “Delay and Wreck of the Peacock: An Episode in the Wilkes Expedition.” Oregon Historical Quarterly (Summer 1991). 119-198.