Henry Schenck Tanner’s “A Map of North America” represents a significant placeholder in the early American literature on continental expansion of the republic to the West. The map was included in the fourth folio of Tanner’s New American Atlas, published in late 1822. A masterful summary of information derived from existing maps and travel and government documents, it is the first printed map to apply to the region the name “Oregon Terry." Tanner (1786 - 1858) likely adopted this toponym from Congressman John Floyd from Virginia, who introduced a bill in January 1822 to establish a “Territory of Origon” [sic] on the Pacific Coast.

It was a time of deliberations between the United States and Great Britain over sovereignty of territory north of the 42nd parallel. Tanner’s “Oregon Terry.” extends from the Missouri River to the Pacific Ocean, suggesting an American right of possession of transcontinental territory because of proximity both to the Columbia River and to regions east of the Rocky Mountains, where sovereignty already had been claimed or established. Tanner does not extend the 49th parallel boundary west of the Rocky Mountains, implying that the American territorial claims to the north were valid.

Tanner’s is the first map to name “Long’s Peak” and may be the first to identify the proposed Ukase (decree) of Tsar Alexander I of Russia in 1821, which claimed Russian sovereignty in the Pacific Northwest above latitude 51 degrees.

The Atlas and “Map of North America” were heavily advertised in newspapers and favorably reviewed in the critical press. In 1958, cartobibliographer Carl Wheat noted that the map “was a great cartographic achievement…the progenitor of a long line of famous maps." The map was reissued in a slightly revised state in 1825 and later. 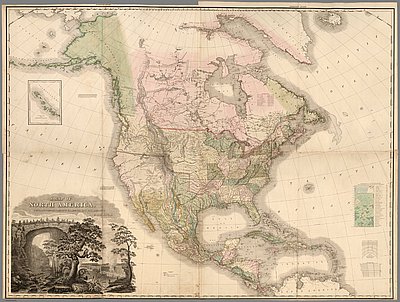