Simeon John Trudeau Jr. was a major contributor to the musical life and culture of twentieth-century Oregon. A musician, conductor, and teacher, he was a founder of the Britt Music Festival in Jacksonville, the Portland Pops Orchestra, and the Portland Brass Ensemble. He was an advocate for the arts, especially classical music, and made significant and long-lasting changes to Portland State University’s School of Music.

The son of Simeon John Trudeau and Adelina Beatrice Chapman, Trudeau was born in Salem, Massachusetts, on February 26, 1927. After serving in the 392nd Army Band during World War II, he entered the New England Conservatory of Music, where he graduated cum laude with a degree in trombone performance and orchestral studies. He married Elizabeth Odom in Woburn, Massachusetts, on September 5, 1949. Trudeau joined the Portland Symphony (today’s Oregon Symphony) as principal trombonist in 1951 and was appointed associate conductor in 1959 under conductor Rouben Gregorian. While in that position, he founded the Portland Pops Concerts, modeled on his experiences with conductor Arthur Fiedler and the Boston Pops.

After teaching in the music departments at Reed College (1951-1953) and Lewis & Clark College (1953-1954), Trudeau joined the faculty at Portland State College (now Portland State University) in 1955, the beginning of a thirty-two-year affiliation. When he began teaching at Portland State, the emphasis in the Music Department was on academics. Believing that the department would be better rounded if it emphasized performance, however, he led the effort to add three full-time performers (the Florestan Trio) and four half-time performers to the faculty. The change attracted students and opened the way to improved offerings and a stronger influence in the region. Trudeau was named dean of the College of Arts & Letters at Portland State in 1976, and in 1982 was appointed founding dean of the new School of Fine and Performing Arts, another of his ideas.

In 1963, Trudeau and Portland State colleague Sam McKinney founded the Britt Music Festival in Jacksonville in southern Oregon. Modeled after the Tanglewood Music Festival in Massachusetts, it was the first festival of its kind in the Northwest. In their search for a venue for the festival, Trudeau and McKinney had happened upon the garden of nineteenth-century photographer and homesteader Peter Britt. They presented a proposal for an annual classical music festival to the Jacksonville Town Council, which embraced the idea. Trudeau conducted the orchestra from its first season in 1963 until his retirement in 1987, the silver jubilee season; he returned as guest conductor several times. The Britt Festival received the Governor's Award for the Arts in 1978.

As the conductor of the Portland Columbia Symphony Orchestra from 1987 to 2000, Trudeau led its development from a volunteer group to a semi-professional orchestra. He also founded the Portland Brass Ensemble, conducted the Portland Civic Symphony and the Salem Symphony, and was a guest conductor with orchestras in Europe. Beginning in 2001, he organized and presented the Sundays at Four concert series at Ascension Chapel in Portland. For his contributions to the arts, Trudeau received commendations from Governor Mark O. Hatfield, Governor Victor Atiyeh, and Governor Neil Goldschmidt.

Trudeau was the author of Touches of Sweet Harmony: Britt Festivals, 1963-1987, a memoir published in 2006. At his retirement from Portland State, he and his wife established the Elizabeth and John Trudeau Endowed Scholarship for the School of Fine and Performing Arts. The couple's children are George J.Trudeau, Jeannette Coil, Stephanie Hulcher, and Jennifer Graylands. John Trudeau died in Portland on November 3, 2008. 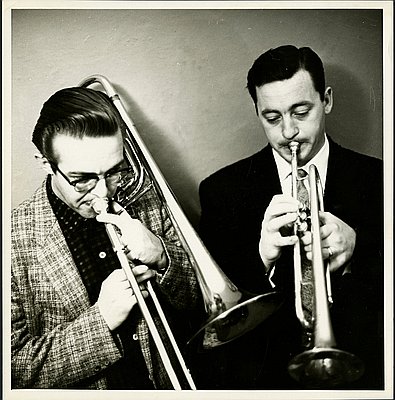 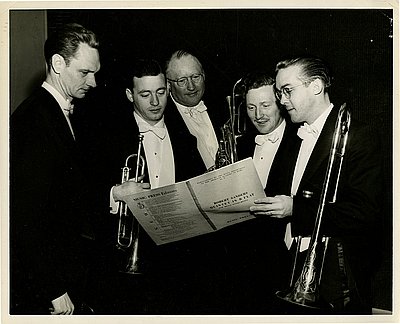 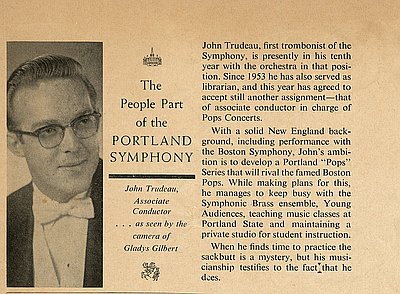 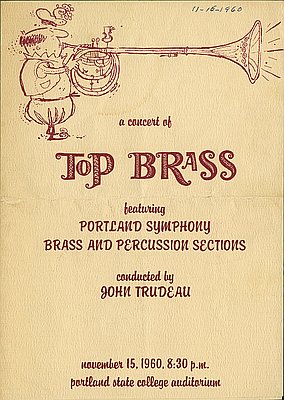 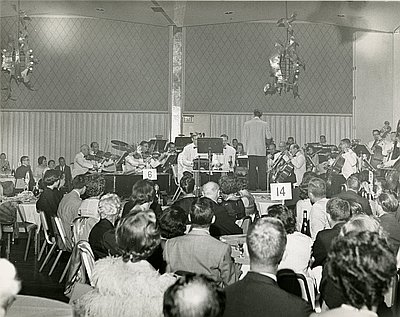 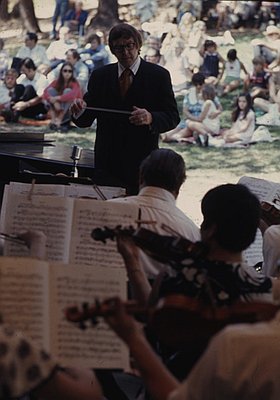