During the mid-twentieth century, Monsignor Thomas J. Tobin played an important role in Portland’s labor and civil rights movements and in the Catholic community in western Oregon. As a member of the War Manpower Commission during World War II, he was an effective mediator between labor and management. He was a founder of a chapter of the Urban League in Portland and also represented the Archdiocese of Portland at all four sessions of the Second Vatican Council. Throughout his almost thirty years at his last parish, All Saints, he inspired many, including those who became priests and religious sisters and brothers.

Born in 1897 in Pittsburgh, Pennsylvania, to an Irish American father and a German American mother, Thomas J. Tobin was the eldest of four siblings. The family relocated to nearby Canonsburg in about 1911 after his father and younger brother died. As the first in his family to attend college, he enrolled at the University of Notre Dame in 1916, graduating four years later as valedictorian of his class.

Tobin took a position teaching Latin at Columbia University in Portland (present-day University of Portland). After a year, he enrolled as a seminarian for the Archdiocese of Oregon City and undertook seminary studies in Rome from 1921 to 1925, when he was ordained. Returning to Portland, he served as assistant pastor at several local parishes, including St. Mary’s Cathedral, the Madeline Parish, and All Saints Parish. In 1927, he was named secretary for Archbishop Edward Howard, a position that vaulted him into the inner circle of Portland Catholic politics and led to a lasting friendship between the two men.

With Howard’s encouragement, Tobin departed Portland for Rome in 1933 to earn a doctorate in canon law, training that would enable him to fill an important role in the administration of the archdiocese. In 1936, he was named pastor of St. Francis Catholic Church in southeast Portland, where he oversaw construction of a new building. It was at about this time that he earned a reputation as a labor mediator.

During World War II, the local office of the War Manpower Commission, a federal agency tasked with ensuring that wartime industries had sufficient employees, created a three-member commission to arbitrate appeals when workers were denied requests to change shipyards. One member of the panel was from labor and another from management; a third, the nonpartisan chair, functioned as the commission’s swing vote. Labor and management agreed that Tobin should be the third arbiter, and the board successfully mediated disputes and prevented strikes until the end of the war. Other cities tried this local solution with less success, and Tobin was credited with holding Portland’s War Manpower Commission together for the duration of the war.

In the early days of the war, a Catholic school for Japanese children was evicted from its building, and Tobin found them classroom space in the library at St. Francis. He also helped Portlanders of Japanese descent who returned home after being imprisoned in camps by finding them jobs and temporary housing. He was a founder of Portland’s chapter of the Urban League in 1946, a national organization formed in 1910 to fight racial discrimination in housing and employment.

At the invitation of Mayor Dorothy McCullough Lee, Tobin joined the board of the Portland Housing Authority (PHA) in 1949. The PHA had been established in 1941 to oversee the administration of public housing in the city, and Tobin served on the board for four years. He resigned in 1953 over his frustration that city residents would not support adequate public housing.

Within the local Catholic community, Tobin played an important role in helping his parishes embrace the liturgical reform. Before the Second Vatican Council of the 1960s, Catholic Masses were in Latin, and the laity were often not actively engaged in the liturgy. Tobin was a reformer on this front. In 1942, for example, he was the first priest in the archdiocese to celebrate mass while facing the people rather than facing away from them (English would not be introduced into the liturgy until the 1960s). He also promoted the use of booklets in English that made it easier for the laity to follow the action of the Latin Mass. In 1942, Tobin was named pastor of All Saints Parish on NE Glisan in Portland's Laurelhurst neighborhood, a post he would retain until he retired in 1970. He oversaw the building of a new church in 1966.

From 1962 to 1965, Tobin represented the Archdiocese of Portland at all four sessions of the Second Vatican Council, a worldwide meeting of Catholic leaders at the Vatican that enacted significant pastoral reforms. In addition to participating in the meetings, he wrote articles about the developments of the Council for the archdiocesan newspaper, the Catholic Sentinel. Between sessions, he played an instrumental role in implementing the Council’s mandates in western Oregon, and after the Council closed, he served on a local commission tasked with implementing liturgical changes.

Tobin retired to Rome in 1970, but his health declined, and he returned to Oregon, where his sisters oversaw his health care. He died in a Beaverton nursing home on November 7, 1978, and was buried at Mount Calvary Cemetery in Portland. 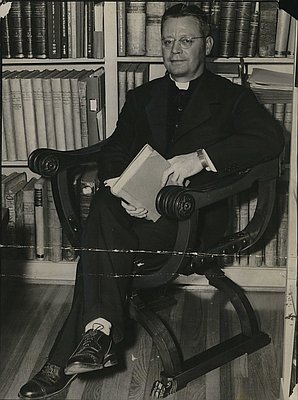 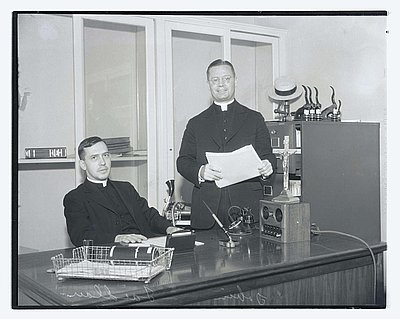 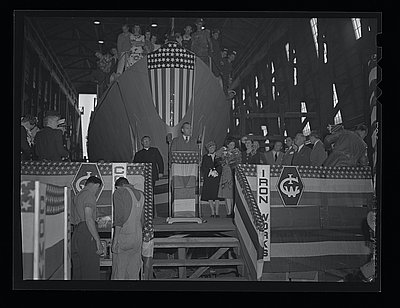 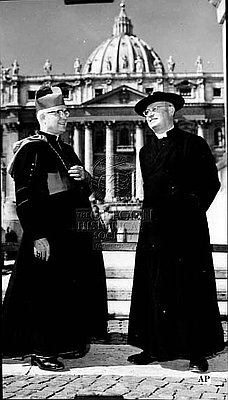 Thomas Tobin
Courtesy Archives of the Archdiocese of Portland, Oregon

Mertz, Samuel. "'All Things to All Men': The Life and Work of Monsignor Thomas J. Tobin, Priest of the Archdiocese of Portland in Oregon" (2019). Dissertations and Theses. Paper 5243. https://pdxscholar.library.pdx.edu/open_access_etds/5243

The Housing Authority of Portland was created in 1941 in response to the urgency of war preparations and the needs of the thousands of people who moved to Portland to help build ships for the military and work in other war-related industries.

The need for housing for workers became apparent …

The Roman Catholic Archdiocese of Portland consecrated the grounds of Mount Calvary Catholic Cemetery in the West Hills of Portland on September 30, 1888. Over a thousand people attended the hours-long ceremony, despite a constant, drizzling rain. It was the second Catholic cemetery in Multnomah County and the first in …