Dorothy Lawson, mother of Oregon Governor Thomas Lawson McCall, was born into luxury on October 11, 1888, the daughter of financier Thomas W. Lawson of Boston. He was known as a “boy wonder,” she would later write, “a millionaire at thirty and a thirty-times millionaire in the early 1900s,” when he controlled all the copper in the United States. The family owned several yachts, racing boats, and the only seven-masted schooner ever built, the Thomas W. Lawson.

Dorothy Lawson grew up on the thousand-acre estate of Dreamwold on Cape Cod, Massachusetts, surrounded by maids, servants, an Italian chef, and three hundred race and show horses. She attended private schools in New England. The Kennedys and Lawsons were well known to each other, as their homes on Cape Cod were adjacent. Tom McCall would later begin his autobiography, “Our family was quite a bit like the Kennedys in its orientation to public affairs. We were devoted readers and listeners, and Mother would spend hours reading Dickens, Thackeray and Tolstoy out loud to us.”

As part of her education, Dorothy Lawson traveled in Europe and studied French literature and Italian at the Sorbonne. In 1907, before she was twenty, she had tea with Mark Twain in London and breakfast in Buckingham Palace with the Duke of Argyll, son-in-law of Queen Victoria.

Lawson met Henry "Hal" McCall—a graduate of Harvard and the son of Samuel Walker McCall, U.S. representative and later governor of Massachusetts—when the two families lived in Winchester, Massachusetts. They were married on December 15, 1910, at Dreamwold Hall.

Intrigued by the stories of fruit ranches, fields of golden grain, and the carefree life of cowboys, Hal McCall had developed an intense interest in life in the West. His adventurous father-in-law was persuaded of the possibilities, and for their wedding gift Tom Lawson bought the couple 640 acres along the Crooked River in central Oregon. Their three-story mansion in the sagebrush—a miniature Dreamwold Hall—was designed by architect Ellis F. Lawrence, who outfitted the house with a shipment of household goods and a thousand-book set of Everyman’s Library. He landscaped Westernwold on Crooked River and supplied the ranch with a shipment of stock, including registered Jerseys, South Down ewes and rams, cages of Rhode Island Red and Plymouth Rock hens and roosters, and standard-bred trotting horses, the first time any of these had been raised in Oregon.

The McCall family and their “celebrated ranch” became the talk of the homestead country, according to historian Stewart Holbrook, and Dorothy McCall relished the attention. Five children were born: Henry (1911), Tom (1913), Dorothy (1914), and twins Sam and Jean (1919). “We had the biggest ranch house anywhere,” Governor McCall wrote, “with long shelves of books, saddles, rifles, fireplaces, old statuettes and gently gleaming crystal and silver, and rooms and rooms, seemingly without end.” Dorothy McCall presided over the household and imparted an aggressive independence to five impressionable children.

At age severnty-nine, McCall recorded her anecdotes and personal recollections in Ranch under the Rimrock (1968); four years later, she completed her autobiography, The Copper King’s Daughter (1972). She was flamboyant and dramatic, at times melodramatic, and with a ready and sharp tongue. When her son Tom McCall was prohibited from serving longer than two terms as governor in 1975, for example, she announced her candidacy to succeed him, pledging to carry out his policies but without “his foot in the mouth.” She canceled her run because she “didn’t want to get into the muck of politics.” Once, trying to reach her son Tom in Washington, D.C., she got through to President Lyndon Johnson, who reported to the governor, “I had a great talk with your mother.”

Dorothy Lawson McCall died on April 2, 1982, and is buried in Redmond Memorial Cemetery. 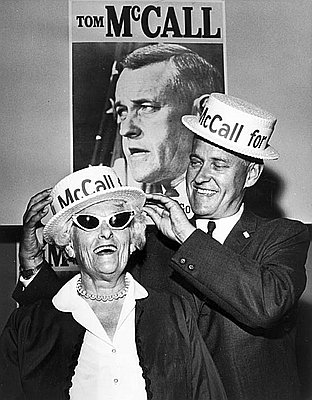