The Roman Catholic Archdiocese of Portland consecrated the grounds of Mount Calvary Catholic Cemetery in the West Hills of Portland on September 30, 1888. Over a thousand people attended the hours-long ceremony, despite a constant, drizzling rain. It was the second Catholic cemetery in Multnomah County and the first in Portland (Portland and East Portland were separate cities before 1891). In 2020, Mount Calvary Catholic Cemetery, with 53,000 graves, was the largest of three cemeteries in the Archdiocese.

In 1858, the Roman Catholic Portland Archdiocese established its first cemetery, Saint Mary's, in East Portland next to Lone Fir Cemetery. By the late nineteenth century, Saint Mary's was at capacity. The need for a new cemetery, and the desire of Portland congregants for one west of the Willamette, led the Archdiocese to purchase 100 acres in Portland’s West Hills in 1888. Located on what is now West Burnside and Skyline Boulevard, Mount Calvary Catholic Cemetery sits on land that includes 20.5 acres of the former Nathan B. Jones Donation Land Claim and 10 acres of the former William and Levina Naylor Donation Land Claim. Initially, only forty of the original acres were cleared of trees for immediate use. The Archdiocese hoped the rest would be used for recreation until it was needed. On October 7, 1888, Mary J. Hanley became the first person interred at Mount Calvary, which became an extension of the urban Catholic parishes in the Archdiocese since they did not have cemeteries of their own.

Saint Mary's Cemetery was closed in 1930, and the interments were relocated to Mount Calvary, the only other Catholic cemetery in Portland. Central Catholic High School was built on the site of the former cemetery. In 1961, the Archdiocese opened a second Catholic cemetery in the Portland area, Gethsemane Catholic Cemetery in Happy Valley.

Mount Calvary Catholic Cemetery holds a special place for those who suffered An Gorta Mór, also known as the Irish Famine, in 1845–1851. The Irish population in the Portland area swelled during and after the famine, from one to almost ten percent, and the number of famine Irish interred at Mount Calvary is sizable. In 2006, the Oregon Chapter of the Ancient Order of Hibernians (AOH), the Roman Catholic Archdiocese of Portland, and Mount Calvary Cemetery agreed to commission a replica of The Cross of the Scriptures in Clonmacnoise in Offaly, Ireland, which had been created in the ninth century.

The Oregon Famine Memorial Cross was created by Irish artist Brendan McGloin in County Donegal, Ireland, and shipped to Portland. The seven ton, fourteen-foot-high cross was sculpted in much the same way as its predecessor had been, by hand-carving it over two and a half years. It is a sandstone cross with an Irish limestone base and sits on a concrete foundation. The surface of the cross is divided into panels, showing biblical scenes that include the arrest, betrayal, and Crucifixion of Jesus Christ, the Last Judgement, and Christ in the Tomb. The sculpture serves as a memorial to the millions of Irish who immigrated to the United States during the Great Famine of 1845–1851. Funding for the memorial, which totaled $250,000, came in the form of donations from Portland AOH members and the Oregon Irish diaspora. On December 13, 2008, with approximately four hundred in attendance, the president of Ireland, Mary McAleese, dedicated the Oregon Famine Memorial Cross, which stands on a hill in Mount Calvary overlooking Skyline Boulevard

Mount Calvary Catholic Cemetery built an indoor mausoleum in two stages, in 1946 and 1965. An outdoor mausoleum was built in three stages, 1976, 1989, and 1999, with an overall capacity of more than 1,950 total crypt spaces. The Green burial cemetery location capacity by 2020 consists of 135 spaces. Mt. Calvary’s Columbarium, for placement of cremated remains, was built in two stages, in 1989 and 2019, with a capacity of more than 1,500 niche units. The management of the cemetery remains under the Portland Roman Catholic Archdiocese.

Notable people buried at Mount Calvary include Ben Holladay (1819–1887), who built the Oregon and California Railroad; Lawrence Keating (1899–1963), an actor known for his role in the TV series Mister Ed; John E. “Jack” Dempsey (1862–1898), the world middleweight boxing champion from 1884 to 1891; and Francis William Leahy (1908–1973), head football coach at the University of Notre Dame. All were part of the Portland Roman Catholic Archdiocese at the time of their deaths. 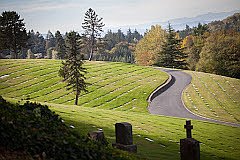 Catholic Charities of Oregon, a member agency of the Catholic Charities Network, describes its work as “partnering with the most vulnerable, regardless of faith, to achieve lasting solutions to poverty and injustice." By 2000, the organization had twenty-five programs and was serving over a hundred thousand people annually.

Mountain View Cemetery, established in 1904, was a fashionable burial site for prominent Ashland citizens during much of the twentieth century. The cemetery consists of two parcels of land at the intersection of Normal Avenue and Ashland Street (U.S. Highway 66) in southeast Ashland.

For over a hundred years, the Roman Catholic parish of St. Stanislaus (Kośeiół Sw. Stanisława) has contributed to the vibrant and varied culture of northwestern Oregon. Established in 1908, the parish is located on what is now N. Interstate Avenue in Portland’s industrial district, near the large Polish immigrant community …