For over a hundred years, the Roman Catholic parish of St. Stanislaus (Kośeiół Sw. Stanisława) has contributed to the vibrant and varied culture of northwestern Oregon. Established in 1908, the parish is located on what is now N. Interstate Avenue in Portland’s industrial district, near the large Polish immigrant community that had come to the city during the late nineteenth century. In 1993, the City of Portland designated the St. Stanislaus church a historic landmark. A year later, the church sponsored the first annual Polish Festival to recognize and celebrate the historic Polish community and neighborhood in Portland.

In 1892, the Polish National Alliance built a lodge in North Portland, and for years Polish residents attended nearby parishes. In 1906, Archbishop Alexander Christie commissioned Father Charles Seroski to build a church for Portland’s Polish Catholics. Paid for in large part by donations from Polish immigrants, the stone and wood church was built in the Romanesque style by parishioners and local craftsmen. St. Stanislaus was dedicated on December 6, 1908. The parish was named after Saint Stanislaus, an eleventh-century bishop in Krakow and the patron saint of Poland.

The Polish community and the St. Stanislaus parish were not large, but it grew during the early 1950s as people emigrated from Poland after World War II. The influx of Polish immigrants to the Pacific Northwest occurred at the same time that some residents were leaving North Portland for neighborhoods elsewhere in the city and outlying areas. Many left the area for work, particularly for jobs constructing Interstate 5.

By 1982, the St. Stanislaus congregation had only thirty families, and the future of the parish was in question. For twenty-five years, the church’s pastors had been from Croatia, and they began offering Masses in Croatian to serve the large community that had developed around the parish. Dr. Adam Lis, a professor of biochemistry at the University of Oregon Medical School (now Oregon Health and Sciences University), a member of St. Stanislaus, negotiated with the Archdiocese of Portland and the Society of Christ (Society of Christ Fathers for Poles Living Abroad) to have a Polish priest appointed to the parish. Dr. Lis had fought with the Polish underground during World War II and in the 1970s had secretly funneled money to anti-Communist forces in Poland. He felt strongly about maintaining and protecting Polish identity.

Pope John Paul II, who was Polish, delegated a representative to meet with officials of the Archdiocese of Portland and the regional leader of the Society of Christ, which had been founded after World War I in an effort to provide spiritual care for Poles living outside Poland. The St. Stanislaus community’s desire for a Polish priest was reinforced in the 1980s by another influx of immigrants who had left Poland because of their membership in the anti-Communist Solidarity Party. As a result, St. Stanislaus had its first Polish pastor in a generation, Father Stanislaw Herba. The parish was reinvigorated.

In 1994, in cooperation with the Polish Library Building Association, which fosters a strong cultural identity among Poles, the parish hosted its first Polish Festival. The annual celebration includes performances by dance and musical groups, an extended polka contest, Polish food and beer, and other aspects of traditional Polish life. The growth of the St. Stanislaus community can, in part, be attributed to the success of the festival, which in 2016 hosted twelve thousand people.

The original church, with some modifications and repairs, is still used by the congregation. 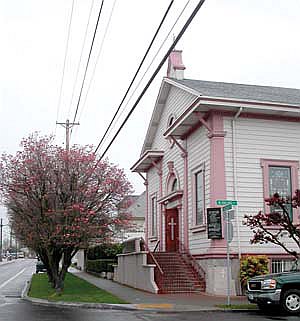 Arthur William Dake, born in 1910 and raised in Portland, burst upon the international chess scene as a teenage phenomenon. He learned chess at age seventeen, and within three years was one of the best players in the world. In 1932, at a tournament in Pasadena, California, he defeated the …

"Founded on a bluff and run on that principle," as historian Jim Covert writes, the University of Portland was born on the morning of September 5, 1901, when the president casually rang a bell and summoned the other seven professors and forty boys to classes. From that moment on the …