Mark Sponenburgh was an Oregon sculptor, art historian, educator, art collector, and philanthropist who traveled widely, living for extended periods in Egypt, England, France, and Pakistan. He taught at the University of Oregon and Oregon State University, founded the Northwest Institute of Sculpture in 1955, and in 1992 with his wife Janeth donated to Willamette University an art collection that is now housed in the Sponenburgh Gallery at the Hallie Ford Museum of Art. A cultural figure in the Pacific Northwest, Sponenburgh also had an international presence: in Austria in 1945 as one of the Monuments Men (a group that worked to retrieve artworks confiscated by the Nazis); as a Fulbright Scholar in Egypt in 1951; and as a founder of the National College of Arts in Lahore, Pakistan, in 1957.

Mark Ritter Sponenburgh was born in Cadillac, Michigan. He attended the University of Michigan in Ann Arbor and enrolled at Cranbrook Academy in Bloomfield Hills for the equivalent of his senior year in 1939-1940. At Crankbrook, he studied sculpture with Marshall Fredericks and Carl Milles. The next year at Wayne University in Detroit he studied the history of sculpture with Ernst Scheyer, the German immigrant scholar. For the rest of his life, he was both a practicing artist and an art historian with expertise on sculpture from ancient Egyptian times forward.

At the end of World War II, Sponenburgh studied in Paris, where he met and married Huguette Ozanon in 1946. They settled in Eugene that fall, and he joined the faculty of the University of Oregon. In 1957, he resigned to accept a commission from the government of Pakistan to help establish the National College of Arts, where he was appointed dean and professor of fine art and introduced a Bauhaus-style curriculum. He organized an exhibition of Swat folk arts, the first national exhibition of regional art in Pakistan, which opened at the College of Art in 1961.

Later in 1961, his wife ill with cancer, Sponenburgh resigned and traveled with her to Paris, where she died in June. Back in Oregon, he was hired by Gordon Gilkey to establish the art history program at Oregon State University. On sabbatical leave in 1975-1976, he researched sculpture in Ireland, England, France, and Egypt. He taught at Oregon State until his retirement in 1983. He and his second wife, Janeth Hogue Sponenburgh, moved to Seal Rock on the Oregon coast, where they had spent weekends and vacations for years.

As a sculptor, Sponenburgh worked in stone, wood, and mixed media. His early work often explores the human form, as in a walnut carving of the Madonna (1941; Detroit Institute of Arts; purchase prize) and the stone female Torso (1944) in the collection of the Portland Art Museum. His later works are frequently animal forms, such as Birds in Flight (1960; Douglas fir; Portland Art Museum) or The Collector (1970s), a basalt carving of a squirrel at the Hallie Ford Museum. He also sculpted portraits, including a bronze bust of Linus Pauling in 1995-1996 (Valley Library, Oregon State University). Ocean wave patterns fascinated him and inspired works such as the copper wall relief Living Sea (The Shining Sea) from 1981-1982 (Newport Public Library, Oregon).

Following Janeth’s death in 1990, Sponenburgh lived at the coast. In 1996, the Triad Gallery in Seal Rock mounted a fifty-five-year retrospective exhibition of his sculptures and drawings. He continued to create artworks and to travel, returning to the National College of Arts in Lahore as a guest of honor at a convocation in 1996. He endowed lectureships and scholarships at the University of Oregon, Oregon State University, and Willamette University. Mark Sponenburgh died at the age of ninety-four on December 6, 2012, at his home in Seal Rock. 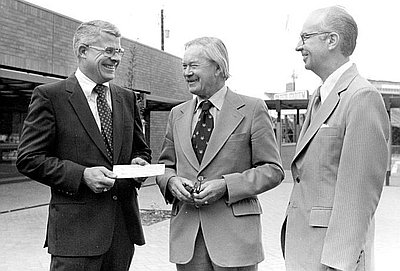 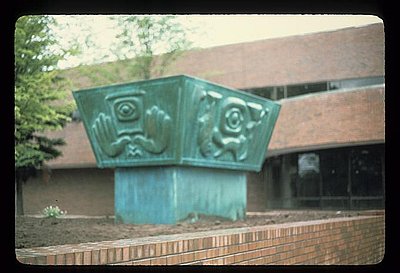 Sculptor Jan Zach, who joined the faculty of the University of Oregon in 1958, had an international reputation. He worked in a variety of media to create sculptures that celebrate courage and freedom in the face of oppression, a life-long concern of Zach's that was rooted in his opposition to …