Bob Smith was a Republican who served in the U.S. Congress, representing Oregon’s Second District from 1983 to 1995 and from 1997 to 1999. He sat in the Oregon House of Representatives from 1961 to 1973, serving as Speaker in the 1969 and 1971 sessions, and was in the Oregon State Senate from 1973 to 1983, serving as minority leader from 1978 to 1982. He was a voice for rural Oregon throughout his political career, championing resource industries and agriculture while working to defend against economic challenges that threatened the rural way of life.

Born on June 16, 1931, Robert Freeman Smith grew up in Burns, the son of the area’s only doctor. Both parents died while he was attending Willamette University. After he graduated in 1953, he took on the family ranch and started several businesses serving construction needs in southeastern Oregon. At Willamette, Smith had gotten to know the dean of students, Mark O. Hatfield, and fellow student Bob Packwood. Hatfield was serving as Oregon’s governor by the time Smith was elected to the house, and Packwood joined him in the house upon his own election in 1962. Smith was a candidate in thirty-one elections, winning them all.

Smith was elected to the Oregon House in 1960 (to begin serving in 1961), winning the Republican primary as a write-in candidate and beginning a long career in which he championed property rights, lower taxes, and fewer government regulations. That first election was a comedy of errors: Smith was talked into running at the last minute, missed the filing deadline, won the write-in with 132 votes (beating the Democratic nominee by 50 votes), withdrew from the race, called on his fellow Republicans in the district to nominate somebody else, and was nominated at a meeting he did not attend.

As majority leader of the Oregon House in 1965, he was involved in behind-the-scenes maneuvering for the 1966 governor’s race. He delivered a deal to candidate Tom McCall: agree to appoint conservative Republican house Speaker F.F. “Monte” Montgomery as secretary of state or face Montgomery in the 1966 primary. McCall rejected the deal. When Smith was Speaker in 1969 and 1971, he often opposed efforts to pass McCall’s progressive agenda—including the Beach Bill, which he rejected on property rights grounds—but he supported the processes that brought the issues before legislators. He also was involved with efforts to provide property tax relief to Oregonians and supported a 1969 sales tax, which voters defeated 89 to 11 percent.

When Smith won election to the Oregon Senate, there were twelve Republicans in the thirty-member body. By the 1981 session, his last year as senator, there were only eight. In recognition of the decline, Smith took part in the humorous “telephone-booth caucus” of 1977, when six members were photographed crammed inside adjoining telephone booths in the capitol. Still, he was effective in committees, triangulating with Republican Governor Vic Atiyeh to have a say in tax policies and economic development ideas, and he was part of the overwhelming legislative majority that refunded over $700 million (about 27 percent of the general-fund revenue) to taxpayers and created Oregon’s kicker law in the 1979 session.

In 1982, when redistricting put the Second Congressional District’s incumbent Denny Smith (no relation) into the new Fifth Congressional District, Bob Smith won the empty seat. His focus was on public lands and natural resources, the basis of much of the economic activity in a district that encompassed all of central and eastern Oregon as well as the Medford and Grants Pass areas. Property rights were central to his political positions, and he opposed the Columbia River Gorge National Scenic Area Act, which became law in 1986.

After serving six terms in Congress, Smith retired in 1993 and moved to Medford. Rancher Wes Cooley won the Second District seat in 1994, and Republicans gained control of the house for the first time in forty years. Two years later, when Cooley was charged with lying about his military record in the 1994 Voters’ Pamphlet, Smith called for him to drop out of the race. Speaker of the House Newt Gingrich then persuaded Smith to run for his old seat by offering him full seniority and the chair of the House Agriculture Committee. He was easily re-elected in 1996. An expert on issues in the arid West, Smith had a steep learning curve about agriculture in other parts of the country. “This boy from Burns is learning a lot about things like avocados and peanuts,” he told his wife in 1997. He announced his second retirement in December 1997. Some of his last votes as a member of Congress were in favor of impeaching President Bill Clinton.

Smith retired to Medford, where he ran a political consulting firm. In 2007, a highway interchange in Medford was named for him, honoring his years in Congress and his work gaining $19 million in funding for the project. He retired from public life in 2016. 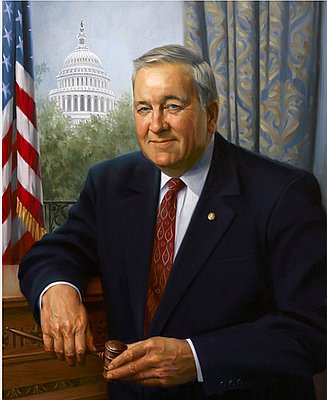 Robert William "Bob" Packwood, a prominent United States Senator for twenty-six years, was born in Portland in 1932. He attended the California Institute of Technology for a few months before transferring to Willamette University, where he graduated in 1954 with a degree in political science.

During his undergraduate years, …