F. F. “Monte” Montgomery served in the Oregon House from 1959 to 1969 and was the first Speaker to serve two terms since 1913. He was a leader of the more establishment wing of the Republican Party during the rise to the governorship of the progressive Tom McCall. After leaving the legislature, he was head of the politically powerful Association of Oregon Loggers and a board member for the State Accident and Insurance Fund. His political life ended in scandal when he mixed the leadership roles of those two organizations for his own benefit.

Finis Firman Montgomery was born in Oklahoma City in 1924. Unable to fight in World War II because of ear problems, he took a job at an Oklahoma aircraft manufacturer and began selling life insurance. In April 1943, he married Lois Roberts; they would have three children. After a visit to a friend attending the University of Oregon, the couple moved to Eugene in the mid-1940s. In 1956, after a few years in the printing business, he opened the Montgomery Insurance Agency.

Montgomery was active in the Jaycees and served as its Oregon president in 1955. His work with the Jaycees introduced him to politicians, and he served on the Eugene planning commission. A local editorial in 1958 described him as “one of the most active citizens in town.” He was elected to the Oregon House and was House minority leader in the 1961 and 1963 sessions. Republicans took the Oregon House in 1964, and Montgomery was elected Speaker.

Montgomery and Tom McCall tangled over the 1966 governor’s race, when Montgomery—backed by key parts of the business community—proposed that McCall promise to appoint him Secretary of State or face a challenge in the primary. Montgomery backed down and abandoned the primary after he received unfavorable poll results.

With his sights set on the Secretary of State position in 1968, Montgomery took on Republican Clay Myers, who was appointed to the position and was in his first statewide contest. In March, Montgomery and McCall publicly butted heads over conditions at the Oregon State Penitentiary. Riots broke out at the prison one day later. In the aftermath, Montgomery’s public excoriation of prison management was seen as adding fuel to the riots. Myers won the May primary, and Montgomery left government service when his House term was up in early 1969. He worked in land development, insurance, and international trade and in 1977 was named executive vice president of the Association of Oregon Loggers (AOL).

Governor Vic Atiyeh appointed Montgomery to the governing board of the State Accident Insurance Fund Corporation (SAIF) in 1979, and he served as CEO and chair of the board of directors in 1981–1982. A Secretary of State’s audit of SAIF in 1982 found that he simultaneously was running SAIF and favoring AOL in its contracts with the corporation—a direct conflict of interest. Montgomery resigned from the SAIF board in March 1983 to create a competing AOL workers’ insurance plan. An April 1983 Secretary of State audit showed that he had manipulated rates so that $5 million flowed to the loggers’ group—the money that Montgomery used to start the competing plan.

A Lane County district attorney criminal investigation found that Montgomery engaged in fraud involving AOL expense accounts. In addition, he purchased rental homes in Eugene from himself, with a $96,000 AOL loan that he authorized. When this information became public, the AOL board fired him. He was arrested in January 1986 and charged with eleven felonies and two misdemeanors. Found guilty on six counts, he served thirty-six hours in jail (released due to overcrowding) and was liable for fines and restitution. He reached a plea bargain on the remaining counts in February 1987. His days as a political power player in Oregon were over.

Montgomery and his wife moved to Keaau, Hawaii, where he opened a travel business. He died in Hilo in December 2016. 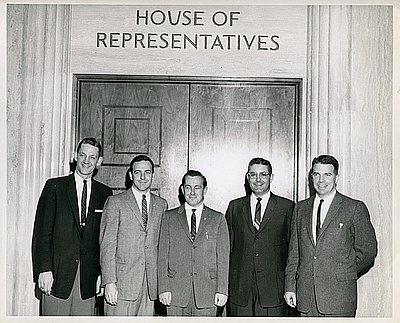 Clay Myers served as Oregon Secretary of State from 1967 to 1977 and as state treasurer from 1977 to 1984. His more than seventeen years as an Oregon constitutional officer stand as a record for a member of the State Land Board, which is comprised of the governor, secretary of …