Arthur Frederick Scott, known as Scotty, was a distinguished member of the Reed College faculty. He served as chair of the Chemistry Department from 1937 until his retirement in 1965 and served as interim president of the college in 1942–1945. A teacher and researcher in the field of radiochemistry, Scott created the Reed College Nuclear Research Reactor, the only such facility in the world operated by an exclusively undergraduate college. He was also instrumental in establishing the Oregon Graduate Center (now part of Oregon Health and Science University).

Scott was born in Coytesville, New Jersey, on August 14, 1898. He received his undergraduate education at Colby College in Waterville, Maine, graduating in 1919. As a doctoral student in chemistry at Harvard University, he researched the chemical determination of the atomic weight of boron under the direction of Gregory P. Baxter, who is credited with determining the accurate measurement of the atomic weights of twenty-nine elements. During the 1922–1923 academic year, a Parker Traveling Fellowship allowed Scott to spend the year in Munich working with pioneering radiochemist Kasimir Fajans.

Scott joined the faculty of Reed College in 1923 as part of a two-person Chemistry Department; he received his PhD the next year. He had met Vera Prasilova, a Czech photography student at the Graphic Arts School in Munich, and the couple married in Portland in 1925. The Scotts had three daughters. In 1926, Arthur Scott taught at the Rice Institute (now Rice University) in Houston and returned to Reed in 1937 as a professor and chair of the Chemistry Department. He retired in 1965 and continued to do research until his death.

As a teacher, Scott’s strength was in his interactions with students in the classroom and research laboratory. In 1957, the American Chemical Society (ACS) awarded him the Manufacturing Chemists Award for excellence in teaching. The next year, he received a teaching award from the Research Corporation, and in 1960 he was recognized as the nation’s outstanding college chemistry teacher with the ACS Award in Chemical Education (now the George C. Pimentel Award).

Scott particularly wanted to ensure that high school and college chemistry teachers were able to keep up with advances in science. In his ACS Award address, published as “Retreading the Chemistry Teacher” in the Journal of Chemical Education, he proposed solutions to the problem. One proposal resulted in a series of books entitled Survey of Progress in Chemistry, published by Academic Press. Each volume contained reviews of recent research written for teachers who wanted to incorporate the latest work into their courses. Scott edited the first nine volumes of the series between 1963 and 1980. (Volume 10, edited by Gene Wubbels, was published in 1983, after which the series was discontinued.)

After World War II, Scott renewed his interest in radiochemistry, teaching courses for undergraduates and a course to new MDs and PhDs, with support from the Atomic Energy Commission and the Medical Branch of the Armed Forces Special Weapons Project. A subcritical “pickle barrel” reactor (a large barrel containing uranium fuel rods and a neutron source) was installed on campus in 1948, which allowed students to perform radiochemistry experiments.

The Reed College Nuclear Research Reactor facility was constructed during the 1967–1968 academic year and went on-line on July 2, 1968. It is widely used by scientists in the area, primarily for trace element analysis and to study the effects of radiation on materials and biological systems. Scott's extensive connections with the radiochemistry community and the Atomic Energy Commission were crucial in obtaining the facility for Reed, and many Reed undergraduates have since become licensed nuclear reactor operators (only valid at Reed).

Scott received a grant from the American Chemical Society Petroleum Research Fund to finance his sabbatical at MIT during the 1958–1959 academic year, and he spent 1962–1964 in Washington, D.C., as the head of Special Projects in Science Education at the National Science Foundation. He was provost of the Oregon Graduate Center in 1969–1971 and served on several Portland City Club research commissions, particularly the 1955 Fluoridation Study that produced a document that was circulated nationally.

Scott’s honors included Doctor of Science degrees from Colby College (1964) and Reed College (1973), and Reed gave him the Howard Vollum Award for Distinguished Accomplishments in Science and Technology in 1977. In 1978, Lewis & Clark College honored him with the Aubrey Watzek Award for “adding a special quality of life in the Pacific Northwest.” Reed established the Arthur F. Scott Professorship in Chemistry and dedicated the Arthur F. Scott Laboratory of Chemistry in 1992.

Baxter, G. P., and A. F. Scott. “A Revision of the Atomic Weight of Boron. The Analysis of Boron Trichloride and Boron Tribromide.” Proceedings of the American Academy of Arts and Sciences 59.2 (1923): 21-48. 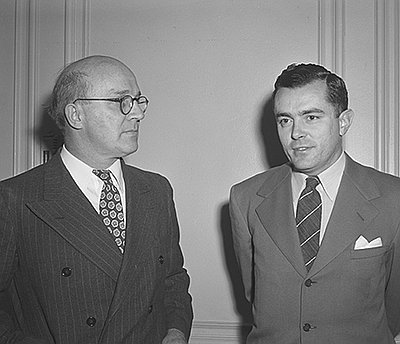 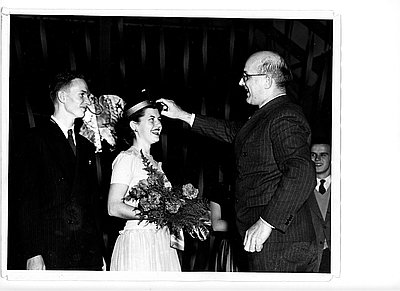 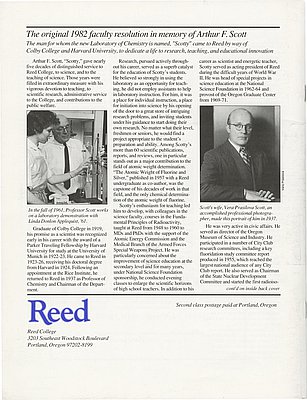 Dorothy Olga Johansen was a prominent Pacific Northwest historian and educator who taught at Reed College in Portland. She was born in Seaside on May 19, 1904, graduated from Astoria High School in 1922, and attended Oregon Normal School (now Western Oregon University), where she earned a teaching certificate in 1925. …

E. B. MacNaughton was one of Portland’s most prominent citizens during the first half of the twentieth century. During his long career, he applied his considerable management talents in several different areas. He worked as an architect, engineer, and builder before moving into resource planning and asset management and becoming …

William Trufant Foster was the first president of Reed College, which was founded in Portland in 1908. Under his leadership, Reed instituted policies and practices that became the foundation of the liberal arts college, including an emphasis on academic excellence; not releasing grades to students; a required senior thesis and …