E. B. MacNaughton was one of Portland’s most prominent citizens during the first half of the twentieth century. During his long career, he applied his considerable management talents in several different areas. He worked as an architect, engineer, and builder before moving into resource planning and asset management and becoming involved with comprehensive city planning in Portland. In the mid-1920s, MacNaughton entered the banking business and eventually was named president and then chairman of the First National Bank in Portland. Beginning in 1939 he served as a director and then president of the Oregonian and was president of Reed College from 1948 to 1952.

Ernest Boyd MacNaughton was born in Cambridge, Massachusetts, on October 22, 1880. He attended public schools and earned a bachelor’s degree in engineering from the Massachusetts Institute of Technology in 1902. His first job was working for industrial engineer and efficiency expert Frank B. Gilbreth in Boston. In 1903, MacNaughton moved to Portland, where he took a job as draftsman for architect Edgar M. Lazarus. He married Gertrude Hutchinson in 1907, a marriage that lasted until her death in 1942; they had three children.

In 1906, MacNaughton established an architecture and engineering business with his brother-in-law, Herbert E. Raymond. They were joined in 1907 by Ellis F. Lawrence, a fellow MIT alumnus. MacNaughton, Raymond & Lawrence designed several important buildings in Portland, including the Sellwood Branch YMCA and the Clyde Hotel (now the Ace Hotel) on Tenth Avenue and Stark Street.

MacNaughton eventually became more interested in resource planning and asset management, and in about 1911 he and Robert H. Strong formed the Strong and MacNaughton Trust Company. It was a good partnership. MacNaughton was an experienced engineer and businessman, and Strong was a third-generation Oregonian who knew most of the important people in the city. It was the first real property management firm in Portland.

In the mid-1920s, MacNaughton was approached by Frederic B. Pratt, a principal owner of Portland’s oldest bank, Ladd & Tilton. Pratt was convinced that the bank was being mismanaged, and he asked MacNaughton to become a vice-president so he could analyze the records and problem-solve. Concluding that the bank was in serious financial trouble, MacNaughton brokered its sale to the US National Bank of Portland. In 1928, members of the Henry W. Corbett family recruited him to become vice president of the First National Bank, of which they were principal owners. MacNaughton was named president of the bank in 1932 and chairman in 1947. He became a director of the Oregonian in 1939 and served as its president from 1947 to 1950, when he arranged the sale of the newspaper to S. I. Newhouse.

MacNaughton was an original member of the board of regents of Reed College when it was established in 1919. He was later elected to the Board of Trustees and served as both vice-president and president. His service on those two boards lasted twenty-four years. He was named president of Reed in 1948, initially on an interim basis. Reed was in financial trouble, and McNaughton’s focus was on ensuring the financial well-being of the college. He was able to bring Reed back into the black, and at the request of the trustees he served for four years. He did not accept a salary for his services. As president of Reed, chairman of First National Bank, and president of the Oregonian at the same time, he spent mornings at the bank and newspaper and afternoons at the college.

MacNaughton was active in civic life throughout his career. He was a director of the Library Association of Portland for twenty-two years and its president for nineteen, resigning in 1943. He was an active member of the ACLU and chairman of the National ACLU advisory council from 1955 to 1960. A longtime member of the First Unitarian Church, he was moderator of the American Unitarian Association in 1951. During World War II, MacNaughton worked with Governor Charles Sprague and others on behalf of Japanese Americans. He and Sprague spoke out publicly and strongly to try to counteract the post-World War I anti-Japanese-American sentiment. They tried, unsuccessfully, to deter the Oregon legislature from amending the 1923 Alien Land Law to make it illegal for noncitizen Japanese to hold land purchased in a relative's name. The law was struck down by the Oregon Supreme Court in 1949 through the efforts of Verne Dusenberry and Allan Hart.

Although a lifelong Republican, MacNaughton supported President Harry Truman’s proposal for a Columbia Valley Authority to provide regional management of the resources of the Columbia River in 1949. It was a partisan issue, with most Republicans opposed, so his stand took some courage, but MacNaughton believed that a coordinated effort to manage the Columbia River would be beneficial for the region. Congress did not pass the proposal. Because of his position on the CVA he was subjected to rather icy treatment from some business associates.

In 1944, MacNaughton married Cheryl Scholz (the widow of Richard F. Scholz, the second president of Reed College). He died in Portland on August 24, 1960. MacNaughton Residence Hall on the Reed campus is named for E. B. and Cheryl MacNaughton, and the Oregon ACLU established the E. B. MacNaughton Civil Liberties Award in 1962. 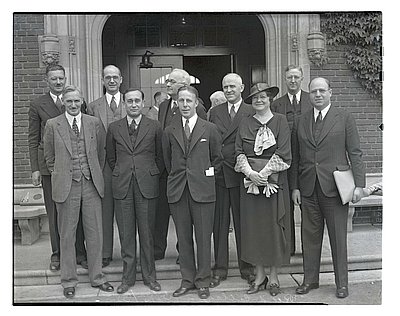 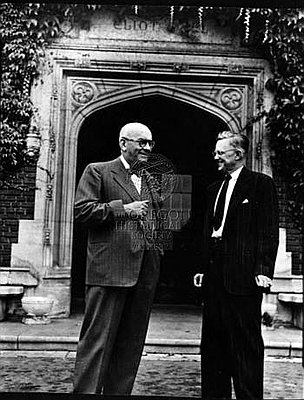 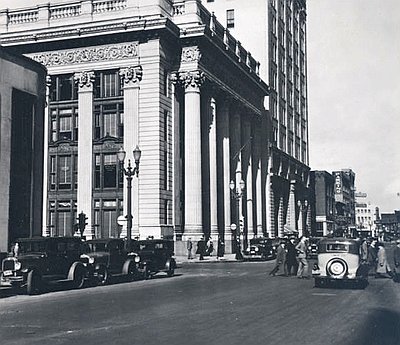 Allan Hart was a Portland attorney who was a leading specialist in energy law, particularly electrical power. As an early general counsel for the Bonneville Power Administration, he was influential in developing its policies and procedures. He also was known for his commitment to civil liberties and public service and was …