The S.S. Star of Oregon was among the first three Liberty Ships built in the United States and the first launched by Henry J. Kaiser’s Oregon Shipbuilding Corporation (OSC). It was the first of its class to enter service. It took 226 days to complete the ship, which was launched 131 days after its keel was laid in May 1941. The twenty-five thousand people who attended the launch in Portland exceeded any of the OSC’s hundreds of other ship launches. In spite of the ship’s auspicious beginnings, however, it was not long afloat.

U.S. shipyards built 2,751 Liberty Ships between 1941 and 1945, the largest production run of any class of ship ever designed. The ships could be tailored to carry cargo, equipment, or troops; to serve as fuel tankers; and for use as hospital ships. They were about 441 feet long at the waterline and 57 feet at the beam, with a a rounded bow and a top speed of 11 knots. With a range of 17,000 miles, the ships could carry 10,800 tons. The crew included as many as 62 civilian merchant mariners and 40 U.S. Navy sailors. Aesthetically unremarkable and expendable but effective and highly adaptable, President Franklin Roosevelt called the Liberty Ship an “ugly duckling.”

The S.S. Star of Oregon, named for the first ship EuroAmerican settlers had built in Oregon, was one of the few Liberty Ships not named after a deceased person of historical significance. Oregon Governor Charles Sprague and Portland Mayor Earl Riley attended the launch, and Blanche Riley, the governor’s wife, sponsored (or christened) the ship. Immediately upon delivery to the Maritime Commission on December 31, 1941, the commission assigned the Star of Oregon to the States Steamship Company of Seattle for operation.

In June and July 1942, the ship transported cargo along the East African coast, making stops in Eritrea, Mozambique, and South Africa. The ship rounded the Cape of Good Hope, crossed the Atlantic, and steamed into the Caribbean. On August 30, 1942, at 2:38 in the morning, a German submarine torpedoed the Star, which began to sink rapidly. After three-and-a-half minutes, only twenty-five feet of the bow remained visible; but all those aboard were able to launch lifeboats and abandon the ship without casualties. An unidentified U.S. Army officer who survived the ship’s sinking later provided the Oregonian with a report of the ship’s last days.

The German submarine surfaced, and its commander asked survivors about the ship’s name and cargo. He made sure they knew the direction to shore and then ordered his crew to sink the S.S. Star of Oregon with fifteen shots from the submarine’s forward gun. Within twenty-four hours an Allied ship had taken the survivors to a nearby port. One survivor later recalled that the Star of Oregon had “just ten more hours to go until we would have reached a well-guarded convoy.” It was one of two hundred Liberty Ships lost during the war. 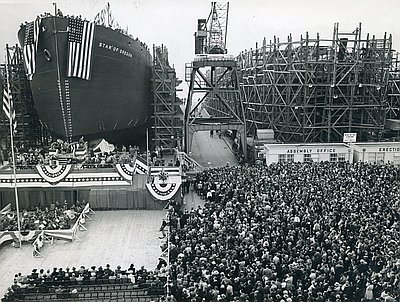 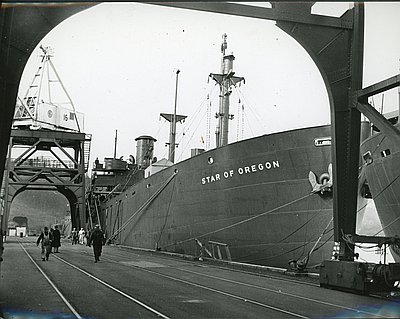 Sawyer, Leonard A. and W.H. Mitchell. The Liberty Ships: The History of the "Emergency" Type Cargo Ships Constructed in the United States during the Second World War. London: Lloyd's of London Press (in conjunction with the National Liberty Ship Memorial, the SS "Jeremiah O'Brien," San Francisco), 1985.

Swan Island sits about eight miles above the mouth of the Willamette River. The island has played a significant role in the development of waterborne commerce in Oregon and the history of the Port of Portland. It was first noted as Willow Island on an 1844 chart by Lt. John Wilkes …

The U.S.S. Astoria (CA-34) had many important roles during its nearly ten years of service for the U.S. Navy. In April 1939, the ship completed a noteworthy diplomatic mission by delivering the remains of Hirosi Saito, Japan's ambassador to the United States, to Yokohama Harbor. Just a few years later, …

The U.S.S. Oregon City (CA-122) was the namesake of its class of heavy cruisers. Designed, ordered, and built during World War II, it was an advanced warship; but the war emergency was over when the ship entered full service in early 1946.