In 1905, when Portland Mayor Harry Lane addressed a crowd at the Lewis and Clark Exposition, one memorable phrase emerged from his otherwise-forgotten speech. Lane, who served as mayor from 1905 to 1909, told the audience that Portland needed an annual "festival of roses."

Portland's affinity for roses began before Mayor Lane made his suggestion. The first rose bush arrived in the Pacific Northwest in 1837, a wedding gift for Anna Maria Pittman, who married missionary Jason Lee at Lee's Mission near Champoeg. Cuttings from that rose bush were planted at Champoeg Park, on the campus of Willamette University, and in pioneer gardens around the region.

The Rose Festival can trace its roots to the Portland Rose Society, established in 1888. Rose Society member Georgiana Pittock, wife of Oregonian publisher Henry Pittock, organized the first rose show in a tent as a benefit for her church in 1889. In 1904, in conjunction with the rose show, the society hosted a "fiesta" featuring a parade and pageant.

The first official Rose Festival in 1907 included an electric parade. The novelty of electricity would eventually wear off; but in the early Rose Festival years, crowds marveled at the elaborate, illuminated floats constructed atop flat cars and carried across Portland's trolley system. The parades allowed Portland to showcase its innovation as one of the first cities in the world to have an electrically propelled trolley system. Nightly fireworks were another popular attraction of early festivals.

While some events, such as the chariot and harness races of 1909 and the once-popular aquatic competitions, have come and gone, parades are a long-lived festival favorite. The electric parade eventually evolved into the Merrykhana Parade, known for its humorous entries and occasional rowdiness. In 1973, the parade turned into a street brawl and was discontinued until 1976, when it was renamed the Starlight Parade.

But it was the Grand Floral Parade that became the festival's signature event. Generations of Portland families have watched the parade each year. Portland children have participated in Rose Festival parades since the beginning. In 1907, the festival included a children's parade of 2,000 girls and boys, representing 23 different schools. By 1911, 5,000 Portland children "trained in kaleidoscope movements" marched in the parade. A Junior Rose Festival began spontaneously on Portland's east side in 1921. Complete with its own parade and junior royal court, the Junior Rose Festival became an official Rose Festival event in 1936.

A parade of some sort has taken place in all but three years of the festival's history. In 1918, all Rose Festival activities were canceled due to World War I. In 1919, the festival was back, and Portlanders celebrated Rose Festival—and the end of the war—with enthusiasm. Clara Fleishman, the 1919 Rose Festival queen, named the Goddess of Victory, led a Victory Parade. In 1926, the festival was canceled due to the building of a new Multnomah Stadium, where many of the events were staged. In 1942, heeding a warning from the federal government to cancel large outdoor events for fear of enemy attack, the parades were canceled, and all other activities were held indoors.

Since the beginning, royalty has been part of the pageantry of Rose Festival, but the type of monarch and the selection method have changed over the years. Carrie Lee Chamberlain, the daughter of Oregon Governor George Chamberlain, was the first Rose Festival queen in 1907. The next year, the queen was abandoned for a male monarch, Rex Oregonus. One of the kings was Portland florist Tommy Luke, who rode the entire parade route on the back of an elephant. In 1914, Rex Oregonus was retired, and a queen once again reigned over Rose Festival. Rex reappeared briefly in the 1920s to rule beside the queen.

Rose Festival queens were typically selected from among Portland's socially elite, but in 1929 financial woes and lack of enthusiasm plagued the festival. After months of doubt about whether the celebration would continue, the event was reorganized. The association decided on a new, more democratic plan for selecting a queen, a method they thought would attract more enthusiasm from the community. Since 1930, each Portland high school has selected a Rose Festival princess from its senior class. In 1931, princesses began receiving scholarships to help fund their college educations.

The Rose Festival has grown into a multi-week celebration that begins in early June and offers a wide docket of activities. Since 1907, when the USS Charleston steamed into Portland, Navy ships have contributed to the pageantry of the festival. The 1909 Rose Festival introduced auto racing, a tradition kept alive by the Rose Cup Races, an amateur racing competition held every year at Portland International Raceway. And the event that started it all—the Rose Show—takes place every June on the floor of Lloyd Center's ice rink.

In June 2007, to mark its centennial, the Portland Rose Festival celebrated with the most elaborate celebration of its 100-year history. Rex Oregonus reappeared at a Centennial Ball, and the International Festivals and Events Association named the Rose Festival "best festival in the world for 2007." 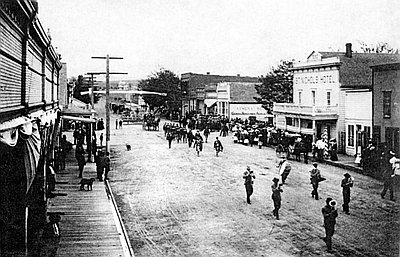 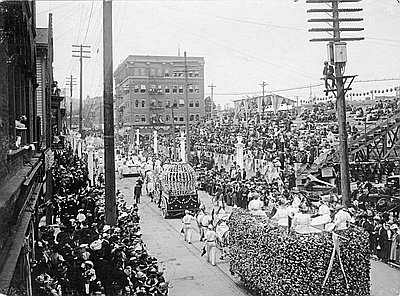 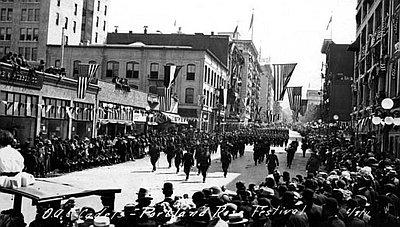 In 1911, a delegation of ten businessmen represented Portland at Seattle's Golden Potlatch Festival. On the train ride home, the men agreed that Portland needed an official body to promote the Portland Rose Festival, and Portland in general. About a hundred men responded to the invitation to become Royal Rosarians. …