In 1911, a delegation of ten businessmen represented Portland at Seattle's Golden Potlatch Festival. On the train ride home, the men agreed that Portland needed an official body to promote the Portland Rose Festival, and Portland in general. About a hundred men responded to the invitation to become Royal Rosarians.

The organization's mythical traditions, including annual knighting ceremonies at the International Rose Test Garden, are inspired by English history.

The Rosarians made their first appearance at the 1912 Rose Festival, wearing their signature white wool suits and straw hats. This uniform has remained virtually unchanged throughout the organization's history. For special occasions, the Rosarians' president, or prime minister, and other high officials wear elaborate capes over their uniforms.

While Rosarians fulfill ambassadorial duties throughout the year, the group makes its largest public appearance at the annual Grand Floral Parade. Much of the pomp and pageantry of Rose Festival is due to the efforts of the Rosarians. They march alongside each float for the length of the parade route and serve as escorts for the Queen of Rosaria and her court.

Members not only cultivate pride in the city of Portland, but the rose itself. In the early years, Rosarians kept and tended some of the loveliest rose gardens in Portland. Since 1917, the Rosarians have maintained their own rose garden at the International Rose Test Garden, in Washington Park, and they frequently plant rose bushes in honor of worthy individuals.

Rosarians serve as representatives of Portland both at home and while visiting other cities. In 1937, members escorted Queen Dorothy III to the opening of the Golden Gate Bridge; and in 1962, the year of the organization's fiftieth anniversary, Rosarians turned out to represent Portland at Seattle's "Century 21" world's fair.

In 1989, the Royal Rosarians broke from a long-held tradition when they inducted their first three female members. Today, about 275 men and women wear the white uniforms. 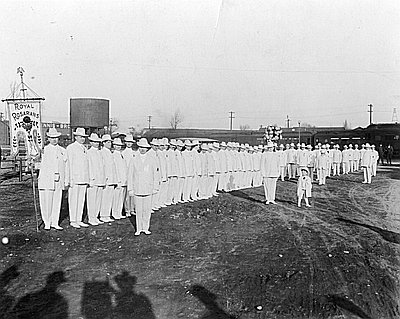