Multnomah Stadium—also known as Civic Stadium, Portland General Electric (PGE) Park, Jeld-Wen Field, and Providence Park—was built in 1926 between Southwest 18th and 20th Avenues on Southwest Morrison Street. It was constructed at the expense of the Multnomah Amateur Athletic Club (MAAC) on a site leased or owned by the club since 1893. A grandstand was erected in the spring of 1893, and the MAAC built its first clubhouse across the field from it in 1900.

President William Howard Taft spoke in Portland at the athletic field in 1909, not long before a fire destroyed the MAAC clubhouse, grandstand, and the adjacent Exposition Building in the summer of 1910. In 1911, Theodore Roosevelt set the cornerstone for the MAAC’s new clubhouse on the south side of the athletic field, and the club replaced the grandstand.

The MAAC had been using the field for its athletic program, as well as leasing it out for various sporting and civic events such as college football games and public meetings. The events attracted large crowds, which overwhelmed the limited and weather-damaged bleachers, prompting the club to expand the grandstand and build covered seating. By 1923, Multnomah Field had become such an important venue for the city (it hosted a huge crowd during a visit from President Warren G. Harding that summer) that the MAAC decided to erect a north grandstand to replace rotting wooden bleachers, giving the field permanent stands on two sides.

The growth of the club and a booming economy allowed the MAAC to plan a stadium to replace the small grandstands at Multnomah Field. Plans initially called for a horseshoe-shaped, two-tiered concrete stadium with a capacity of 100,000. By the time construction began in 1926, the MAAC had enough money to build two-thirds of a horseshoe with one level of seats, with seating capacity for 35,000 people at a cost of $500,000.

Designed by club member Morris Whitehouse, in association with architect A.E. Doyle, Multnomah Stadium was completed in time for the annual University of Oregon–University of Washington football game on October 9, 1926. A crowd of 27,300 fans turned out to see the Huskies defeat the Ducks, 23-9. In 1930, the UO-UW game drew a record 35,266, an attendance number that stood until 1975.

In 1933, pari-mutuel betting was legalized in Oregon, and by May 23 of that year the Multnomah Kennel Club hosted its first race on the stadium’s new track. The Kennel Club maintained its headquarters at the stadium until 1956, when the track was removed.

The dog-racing track was demolished, and an outfield wall was constructed in its place on the east side of the stadium, providing the first proper baseball dimensions since the site was first used for sport. The Beavers, Portland’s minor league baseball team, moved into Multnomah Stadium in the spring of 1956. Infield sod came from Vaughn Street Park, where the team had been playing. Minor league baseball would be a fixture at the stadium through 2010.

The MAAC, in an effort to increase its clout among West Coast sports clubs and attract large-scale events, had transformed Multnomah Stadium into a major athletic venue in the forty years it owned and operated the arena. In 1966, the club, now called the Multnomah Athletic Club (MAC), needed capital and sold the stadium to the City of Portland for $2.1 million shortly after voters had rejected two proposals for a new stadium at Delta Park. Just three years later, the city installed Tartan Turf at a cost of $343,000, giving Civic Stadium the nation’s first outdoor multi-purpose artificial turf.

During the winter of 1981-1982, Civic Stadium’s original roof was replaced at a cost of $9.5 million. The new roof covered a much higher percentage of seats and required the construction of a new press box but otherwise left the stadium unchanged.

In 2001, with the return of the Portland Beavers baseball team and the Portland Timbers soccer team, Civic Stadium was significantly upgraded and named after a sponsor for the first time. The $38.5 million renovation of PGE Park removed outfield seats, constructed luxury boxes and office space, and installed NeXturf, the latest in artificial turf technology. The stadium accommodated 19,566 people.

As the Timbers soccer team grew in stature over the early twenty-first century, altering the stadium again to reflect the shift from baseball to soccer became a priority. In July 2009, the Portland City Council approved a $31 million soccer-specific upgrade, permanently removing the capacity to play baseball in the stadium and constructing an independent east-side stand. Reopened in April 2011, under the name Jeld-Wen Field, the stadium accommodated 18,627 for the home debut of the Timbers in Major League Soccer. The stadium capacity was increased to 20,323 for the 2012 season. In January 2014, the stadium was rebranded as Providence Park as part of an agreement with Providence Health & Services. 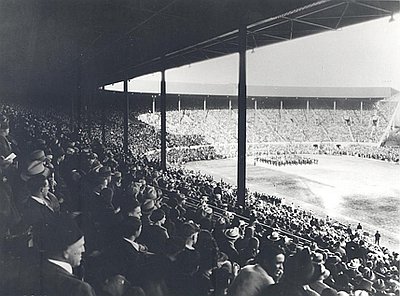 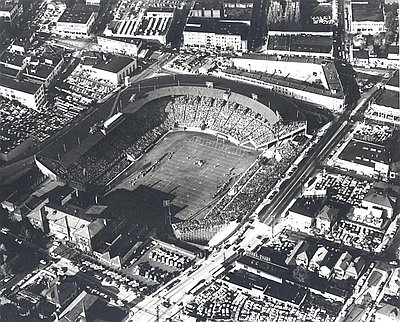 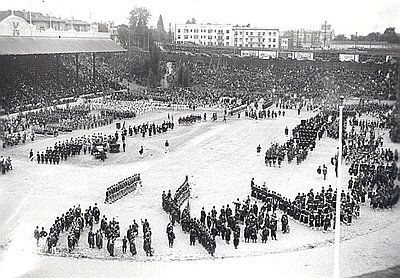 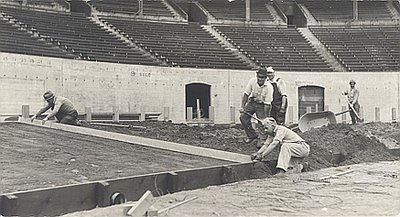 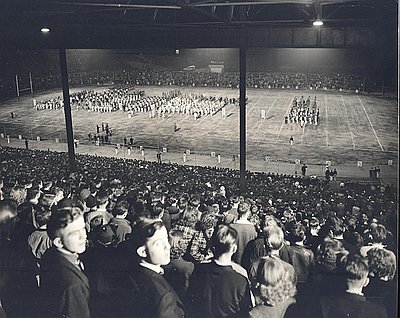 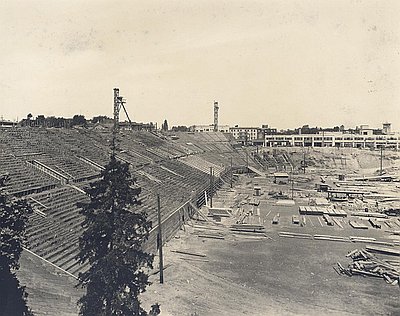 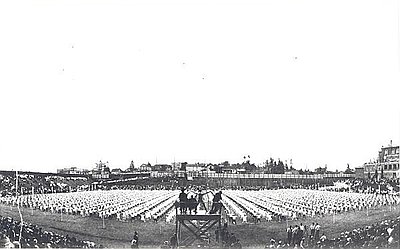 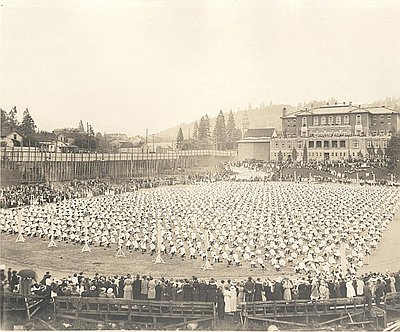 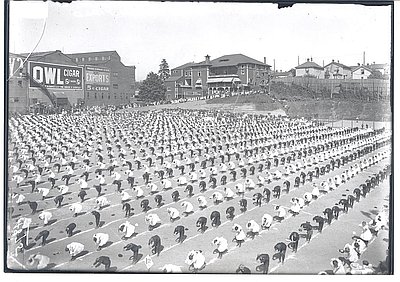 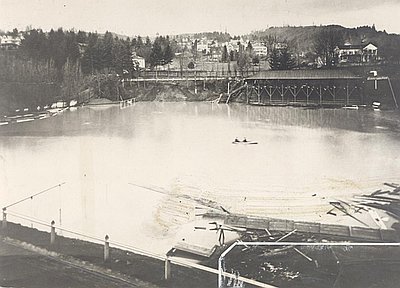 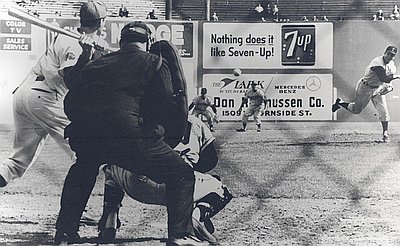 Over the course of his career, Morris Whitehouse designed many important buildings in Portland, the Willamette Valley, and the Columbia Gorge. Born in Portland on March 21, 1878, Whitehouse studied architecture at the Massachusetts Intstitute of Technology, completing his studies in 1905. After a year's study at the American Academy …

Founded in 1891, the Multnomah Athletic Club (MAC) is considered Oregon’s preeminent sports club. The MAC has maintained a presence in Portland’s Goose Hollow neighborhood since 1900, when it built its first clubhouse on Southwest Chapman Street (now 18th Avenue). The current building on Southwest Salmon Street is the largest …

The Portland Beavers represented Portland in minor league baseball for over a hundred years. The city sponsored teams in several leagues prior to 1906, but since then five different ball clubs named the Beavers have played in Portland at six minor league classifications in two different parks.

Local soccer aficionados may remember the glory days of the Timbers—the 1970s and early 1980s, when Portland was known as Soccer City USA. With players such as Clyde Best, Stewart Scullion, and Peter Withe and coaches Vic Crowe and Don Megson, the Timbers packed Civic Stadium with fans. In its …

The Portland Timbers soccer club came into existence in January 1975. By the end of the season, the local media were calling the Timbers the biggest sports story of the year.

Unlike the NBA’s Trail Blazers and the World Football League’s Storm, the Timbers were locally financed, drawing investment …

Vaughn Street Park, as most Portlanders called it, was built in 1901 by streetcar-line owners C.F. Swigert and E.I. Fuller. The park, which filled an area north of Vaughn Street roughly between 24th and 25th Avenues, provided a home diamond for professional baseball in Portland until 1955. Built and rebuilt …