Located east of Siskiyou Pass inside the Cascade-Siskiyou National Monument, Pilot Rock is a prominent landmark in southwestern Oregon, protruding from the skyline of the Rogue-Klamath watershed divide like a hitchhiker’s thumb. The Upland Takelma people, who could see the rock rising above the horizon from their homeland on the Rogue River near the Table Rocks, knew it as Tan-ts’atseniptha (rock standing up).

Members of the U.S. Exploring Expedition, traveling south through the Rogue River drainage in 1841, named it Emmons Peak for the party’s leader, U.S. Navy Lieutenant George Emmons. During the 1840s and 1850s, travelers used Pilot Rock, both as a marker of the approximate boundary between California and Oregon Territory and to "pilot" their way to Siskiyou Pass, which formed the main crossing of that boundary. The Pacific Crest National Scenic Trail passes along the rock's northwestern base.

More than two hundred feet high, Pilot Rock is made of andesite, a remnant of late-stage magma that cooled in the throat of a 25.6 million-year-old volcano. The bulk of the volcano formed as the magma punched through existing volcanically fragmented and chaotically deposited debris. This earlier material, resembling pebble-rich concrete, is called breccia, which was much weaker than the solidified andesitic magma that filled the throat of the volcano. The breccia eroded relatively rapidly over time, somewhat like a melting Popsicle® leaves behind the stick, creating Pilot Rock.

Near vertical columns (columnar joints) are noticeable on the sides of Pilot Rock. When magma cools, it contracts, resulting in cracks that propagate up and down from the cooling surfaces and join to form usually vertical, three- to eight-sided columns. Today, the columns of Pilot Rock are inclined 20 degrees to the east, having been tilted during the slow, progressive uplift of the Klamath and Siskiyou Mountains to the west. Moreover, the columns often change direction, an indication that the volcanic intrusions that resulted in Pilot Rock did not occur all at once but as closely spaced events.

Radial dikes, or radial intrusions, are visible to the east of the base of Pilot Rock. The dikes formed as the landscape bulged upward during the volcanic intrusion and split the existing rocks; magma filled the cracks that radiated out from Pilot Rock.

The name Pilot Rock was used during the early 1970s as the title of a countercultural publication based in Ashland, although its claim that the landmark was an honored “place of peace” among Native groups is without foundation. The local businesses that use the name include Pilot Rock Excavating, Pilot Rock Environmental Consultants, and Pilot Rock Productions. The name of Standing Stone Brewing Company in Ashland was inspired by the landmark, and the company uses a drawing of Pilot Rock as its logo. 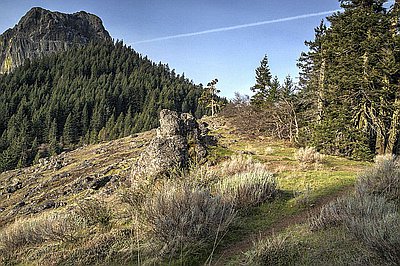 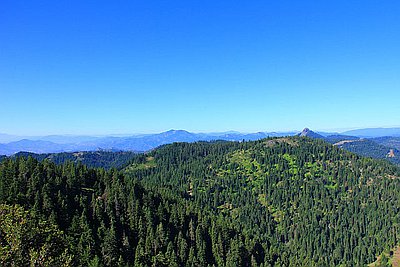 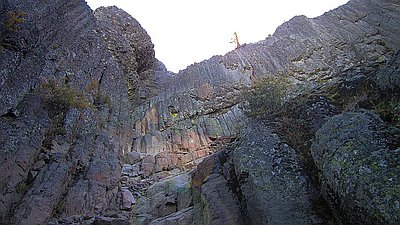 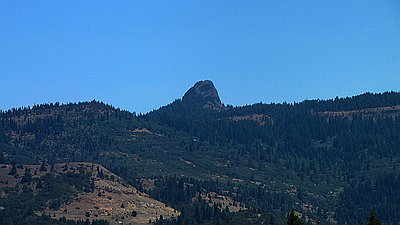 Siskiyou Pass, including the 4,310-foot-high Siskiyou Summit of I-5 that is located a short distance east of the original historic pass, is the highest and most historically significant mountain crossing on the main transportation route that links California and Oregon. The geographic feature known as Siskiyou Pass/Siskiyou Summit has earned …

Smith Rock State Park encompasses 652 acres near Redmond and Terrebonne, in the semi-arid High Desert of central Oregon. This landscape of rock spires, cliffs, and canyonlands lies along the northern edge of the Crooked River caldera, a 26-mile long, 17-mile wide volcanic depression formed through a series of super-volcanic eruptions …

The Table Rocks, two large mesas north of Medford, rise nearly 800 feet from the north side of the Rogue River, opposite where Little Butte Creek and Bear Creek join the river from the south. Lower Table Rock is the downstream, westernmost mesa, while Upper Table Rock is upstream and to …