Situated in the far southwest corner of Oregon, the Siskiyou National Forest covered 1,092,302 acres, including 33,000 acres in California. Located where the Siskiyou Mountains meet the Coast Range, the terrain is extremely steep and rugged, with elevations ranging from 100 to over 7,000 feet. Annual precipitation varies from 40 inches inland to 150 inches near the crest of the Coast Range. A mixed-conifer forest blankets most of the area.

Five designated Wild and Scenic rivers flow through the heart of the former Siskiyou National Forest: Rogue (1968), Illinois (1984), Chetco (1988), Elk (1988), and North Fork Smith (1988). The rivers provide habitat for native and migratory fish and a whitewater experience for recreationists. The Kalmiopsis Wilderness (1964)is the largest of the five congressionally designated wildernesses in the forest.

The Siskiyou National Forest is known for large forest fires. After decades of fire suppression by the U.S. Forest Service, three major fires burned 110,000 acres in 1987. The Biscuit Fire, which burned almost 500,000 acres in the Siskiyou during the summer and fall of 2002, is one of the largest forest fires ever recorded in Oregon.

The Siskiyou has been recognized as the most floristically diverse forest in the western United States, and a large number of rare plants evolved there due to the area’s unusual geology, climate, and fire ecology. Botanists from around the world visit the Siskiyou to study what has become known as a “botanist’s paradise.” Among the best known endemic species are Brewer spruce and Saddler oak; tree species with limited ranges include redwood, Port Orford cedar, Pacific yew, and sugar pine. Associated with the rich diversity of plants are an estimated 270 species of fish and wildlife.

Small groups of people lived in the area for at least 11,500 years. When whites arrived in the nineteenth century, Takelma and Athapascan groups were living a life that included hunting, gathering, and fishing. Salmon and acorns were the most important foods to native people. After a sometimes violent struggle to retain access to their lands, the last battle of what became known as the Rogue River Indian Wars was fought at Big Bend in 1856. The tribal people who remained after the wars were removed to reservations at Grand Ronde in the Willamette Valley and at Siletz on the coast, where many of their descendants live today.

The first discovery of gold in what is now Oregon—an extension of the California Gold Rush—occurred on Josephine Creek in 1851. Hydraulic and lode mining continued to be major activities on the forest through the Great Depression.

Large-scale timber production began in the early 1900s on the now remote Powers Ranger District. Between 1912 and 1915, the Smith-Powers Logging Company extended a railroad line up the South Fork of the Coquille River to access billions of board feet of timber it owned. The company platted the town of Powers and created a booming logging operation that fed its Coos Bay mill, the largest electric lumber mill in the world.

In 1933-1942, young men in the Civilian Conservation Corps built trails, telephone lines, fire lookouts, campgrounds, and Forest Service facilities throughout the forest. Some are still in existence, such as the Cedar and Store Gulch guard stations, Ferris Ford Cedar House, and Gold Beach Ranger Station. All are listed on the National Register of Historic Places.

During World War II, the only bombing of the American mainland by enemy aircraft occurred on the Siskiyou. A Japanese pilot, Nobuo Fujita, flew a submarine-based seaplane over Wheeler Ridge and dropped a bomb into the damp forest. The explosion did no harm, but Fujita regretted the incident and over the next several decades developed a warm friendship with the citizens of nearby Brookings.

The Siskiyou National Forest was important to Oregon in the production of timber, with up to 168 million board feet of timber sold annually. But by the 1980s, concern over the possible extinction of old-growth-dependent species was increasing. Lawsuits over protection of the northern spotted owl and certain salmon species blocked most timber sales.

Public debate over the best uses of forest resources reached a fever pitch in the late 1980s to early 1990s. Galice and Illinois Valley ranger districts became ground zero in the Northwest “Timber Wars,” a rift among environmentalists, the timber industry, and the Forest Service. Bald Mountain was the first place where Earth First! activists lay in the path of bulldozers to protest the logging of old-growth forests. In one of many acts of civil disobedience, a demonstration at the forest headquarters in Grants Pass moved from the parking lot to the roof of the building and then inside to the lobby, where protestors chained themselves to office furniture.

To break the deadlock, Pres. Bill Clinton produced the 1994 Northwest Forest Plan, which severely reduced the volume of timber available from the forest and placed an emphasis on long-term forest health. After the Biscuit Fire in 2002, protests against logging fire-killed trees were vehement, but by that time the Forest Service had incorporated principles of sustainability into preparing the timber sales and all lawsuits on the issue were dismissed by the courts. 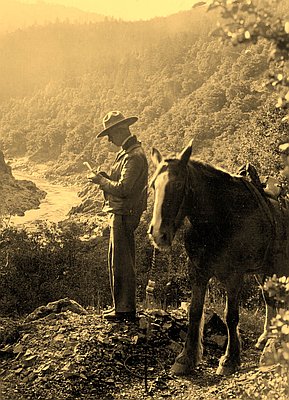 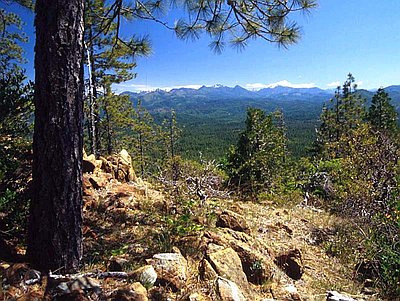 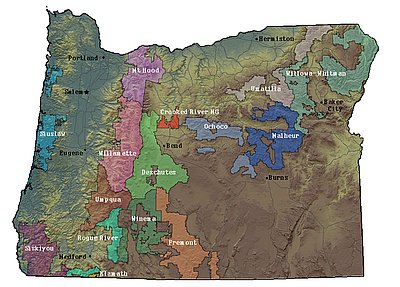 On July 13, 2002, a series of electrical storms passed over southwestern Oregon's Siskiyou Mountains. That afternoon's barrage of lightning strikes ignited five separate fires inside the vast Kalmiopsis Wilderness. Burning for well over four months in remote and rugged terrain, by early August the fires had grown together into a …

The 179,755-acre Kalmiopsis Wilderness, located in southwestern Oregon in the rugged Klamath/Siskiyou Mountains, is the third largest wilderness in the state. A portion of the current Kalmiopsis was originally protected by the U.S. Forest Service in the 1940s and subsequently was included in areas protected by the Wilderness Act of …

The western or Pacific yew, Taxus brevifolia, belongs to the yew family Taxaceae. It is unusual among evergreen trees with needle-like leaves because its single seed is partially enclosed by a fleshy pink structure called an aril. Most Oregon evergreens have seeds borne in brown woody cones (pines) or small …

Port-Orford-cedar (Chamaecyparis lawsoniana)—also known as white or Oregon-cedar, ginger-pine, or Lawson cypress—is widely known and recognized for its horticultural uses and the quality of its wood. Its species name, lawsoniana, honors Charles Lawson (1794-1873), the Edinburgh nurseryman who first introduced the species to horticulture.