The first steam locomotive in the Pacific Northwest—the "Oregon Pony"—was used in the early 1860s to portage steamboat passengers and goods past the Cascade Rapids, a rocky and turbulent stretch of the Columbia River now drowned by Bonneville Dam. Steamboats provided transportation on the Columbia between Portland and mining areas in Idaho and the Columbia Plateau. Portage was also necessary at other navigation obstructions, including Celilo Falls.

San Francisco's Vulcan Iron Works built the little wood-burning engine, only 14.5 feet long, which arrived in Oregon in 1862. It replaced the horses and mules that pulled small rail cars 4.5 miles over iron-reinforced wooden rails for the Oregon Portage Railway. The railway was bought by Oregon Steam Navigation Company (OSN). The company consolidated its Cascades rail portage monopoly on the Washington side of the Columbia River and moved the Oregon Pony to The Dalles, where it may have been used for portages around Celilo Falls.

In 1866, OSN sold the engine and it returned to San Francisco for work filling and grading the streets of that city. After the Oregon Pony was damaged in a 1904 fire, the owner partially restored it and donated it to the Oregon Historical Society. It was displayed at the 1905 Lewis and Clark Exposition and afterward at the Albina Rail Yards. In the 1930s, the Oregon Pony was moved to Union Station; it was returned to Cascade Locks in 1970. The Port of Cascade Locks funded a 1981 restoration and built a permanent, covered display. 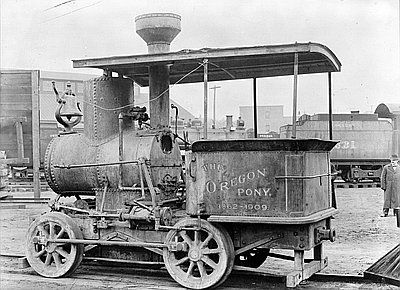 The Oregon Pony
The "Oregon Pony" steam locomotive. It was stored in Albina in 1916.
Oregon Historical Society Research Library bb004049

A donkey engine was an integrated machine consisting of a powerplant and gearing that turned one or more drums or winches containing wire rope. Designed to lift, drag, and move logs from the stump to an accumulation point, donkey engines were also used to load logs on cars that transported …