A donkey engine was an integrated machine consisting of a powerplant and gearing that turned one or more drums or winches containing wire rope. Designed to lift, drag, and move logs from the stump to an accumulation point, donkey engines were also used to load logs on cars that transported logs to distant mill sites. Though invented in California, the donkey engine helped accelerate timber harvesting throughout the Pacific Northwest. It was used extensively in Oregon and contributed significantly to the state's economy and culture from the late nineteenth well into the twentieth century.

After the railroad, the donkey engine was the next major application of industrial revolution technology to the movement of logs. Prior to the invention of the donkey engine, logs had to be moved by gravity or brute force, usually in the form of hand labor or by using teams of oxen or horses. The advent of the steam-powered donkey engine made high-volume, mechanized logging possible, thus ushering in the era of large-scale logging and lumbering during the early years of the twentieth century.

John Dolbeer of the Dolbeer and Carson Lumber Company of Eureka, California, is generally credited as the inventor of the donkey engine. He first tried out his invention in 1881, and the device was patented in 1882. Many innovations followed, including the use of wire rope, the addition of more cylinders, and multiple drums.

Generally designed to yard and load logs, the design of the donkey engine evolved greatly. Early models dragged logs along the ground and used “line-horses” to return cables to the woods for subsequent log turns. Later, multiple-drum units allowed for a continuous-loop system, enabling the donkey engine itself to return rigging to woods without human or animal intervention. With the advent of “high-lead” logging systems, wire rope rigging was suspended from spar trees, providing lift when moving logs toward accumulation points with corresponding improvements in efficiency. Most donkey engines were designed for mounting on paired parallel sled logs that enabled the machines to pull themselves across the landscape.

From the 1890s until the 1920s, most steam donkeys were wood-fired. Labor savings by converting to oil-burning engines were significant, eliminating a woodbuck and a fireman from each donkey crew. By the late 1930s, however, the fuel efficiencies, the elimination of the need to pipe water to the donkey, and the reduced fire hazard of internal combustion engines spelled the end of steam engines in the woods. Rationing and the conversion of industrial goods manufacturing to military production during World War II seriously delayed the complete changeover from steam to internal combustion motors until after the war. 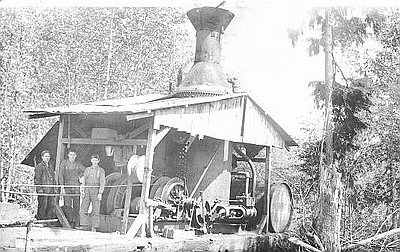 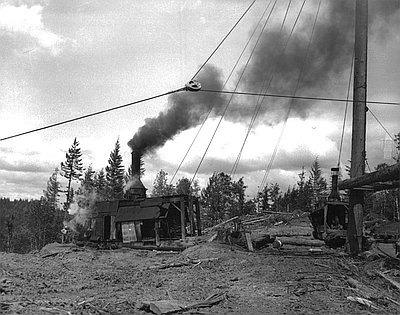 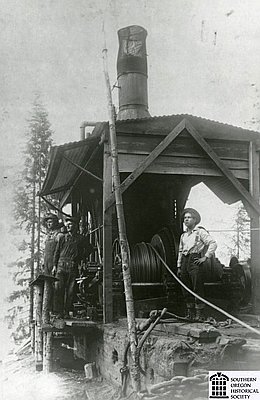 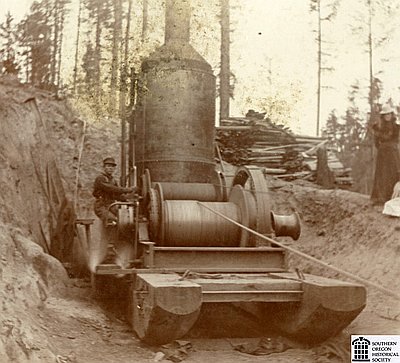 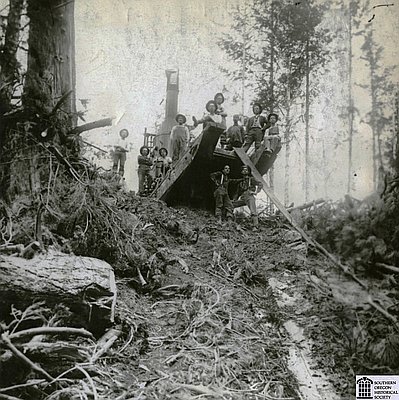