In the nineteenth century, the town of Cascade Locks, located forty-five miles east of Portland, grew as a result of a federal government project to build a canal and locks at the Cascades of Columbia, the most downstream rapid on the river. Until the construction of the government canal and locks in the late nineteenth century, all river transporation had to portage around the Cascade Rapids.

During the 1850s and 1860s, entrepreneurs had developed a rail portage on the river, which became part of a transportation monopoly owned by the Oregon Steam Navigation Company (OSN). OSN controlled the portages at the Cascades and between The Dalles and Celilo Falls, as well as all steamboats on the river.

Congress authorized the project to build a canal and locks at the Cascade Rapids in 1876. The charge was to support "open-river" navigation on the Columbia between Portland and the agricultural lands of eastern Oregon and Washington. The U.S. Army Corps of Engineers began work on the project in 1878; but difficult working conditions, changing engineering plans, and erratic congressional appropriations delayed opening the canal and locks until November 1896.

In 1880, the community of Cascade Locks included about 100 permanent residents and 350 transient construction workers. In the years that followed, the profitability of salmon fishing on the mid-Columbia river aided the gradual growth of the town and the surrounding area. By 1900, about 550 people lived in Cascade Locks and the immediate vicinity.

The scenic beauty of the Columbia River Gorge attracted a summer tourist trade from Portland. During the Lewis and Clark Exposition in Portland in the summer of 1905, 1,417 steamboats passed through the locks, carrying 133,070 passengers. 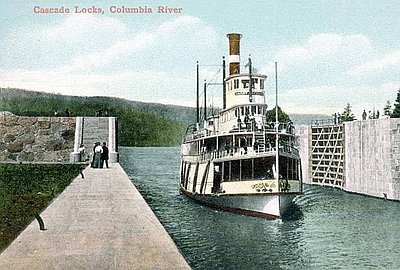 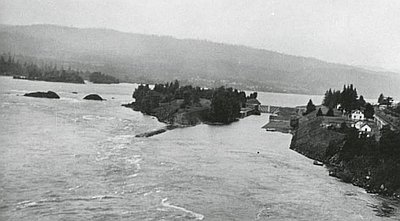 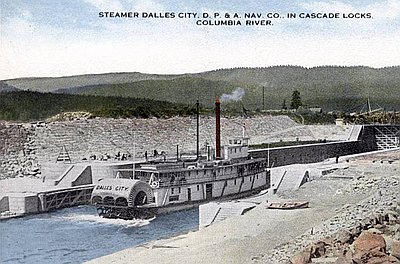 Bridge of the Gods