At age twenty-seven, William Sargent Ladd was the youngest mayor to ever serve in Portland. Ladd is best known, however, for his business acumen, his philanthropy, and his civic involvement, and for the distinctive 128-acre Ladd's Addition in southeast Portland that he created in 1891.

As the city's fifth mayor in 1854-1855, Ladd oversaw the enactment of forty-two ordinances during his one-year, volunteer term—twice as many as his four predecessors together. His tenure brought relative calm to the disorganized on-again, off-again nature of early Portland government.

Four years later, Ladd was again elected mayor, this time against his wishes, to fill a six-month mayoral vacancy. His opponent was the feisty Oregonian editor Thomas J. Dryer, who had opposed the creation of Multnomah County, a measure that Ladd successfully championed before the territorial legislature.

Born in Holland, Vermont, on October 10, 1826, Ladd moved with his family to New Hampshire at age seven. His father was a prosperous physician and his mother part of a deep-rooted New England family. Ladd gained experience as a schoolteacher, farm laborer, and freight agent.

In April 1851, three months after the City of Portland was chartered by the territorial legislature, Ladd arrived in the city after sailing from New York to San Francisco and thence northward. A federal census taken the previous December credited Portland with a population of 821, the largest settlement in the Pacific Northwest.

Of limited means when he arrived, Ladd parlayed his small liquor consignment to over $1,000 within five months. He then hired on as a consignment agent for a friend of his father, W.D. Gookin, a merchant who had recently landed in Portland with a cargo of goods. After thirteen months, Ladd's net receipts had tripled to $3,000, which provided enough capital for him to set up his own store. The following year he persuaded his former schoolmate, Charles E. Tilton, a successful San Francisco businessman, to join him as a silent partner, which allowed W.S. Ladd and Company to expand its inventory.

Ladd also played a leadership role in the founding and succoring of the Library Association of Portland (he donated space for the public library in his handsome brick building for twenty-four years), River View Cemetery, and the Portland Water Commission, which brought "good, clean" drinking water from Bull Run to the city.

Ladd's habits of thrift and industry were legendary. At the same time, he was sometimes seen as haughty and strict about debts owed him, according to Judge Matthew Deady. Nevertheless, his obituary describes him as "plain, courteous, and unassuming."

During the one-year term he served as Portland mayor, Ladd journeyed to San Francisco to meet and marry Caroline Elliott, Tilton's cousin, the fiancée he had left behind in New Hampshire. The couple raised five children and lived the remainder of their lives in Portland. Ladd enthusiastically supported his wife's educational, charitable, and religious works and credited his success in life to her cooperation and sympathy.

In the 1880s, Ladd suffered from a growing paralysis in his legs, but he continued to oversee his many business enterprises and philanthropies. At the time of his death in 1893, his estate was estimated at $5 million, almost half in real estate holdings in Portland and Tacoma, Washington.

A gruesome footnote to Ladd's history occurred four years after his death. His grave at River View Cemetery was dug up and his body removed by robbers who intended to extract ransom from the Ladd family. The four men were later apprehended and served prison sentences. The Ladd family then built a concrete mausoleum for Ladd's remains. 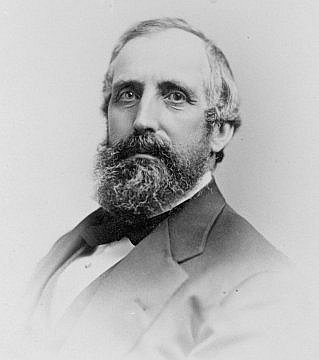 Ladd's Addition is a streetcar-era neighborhood in southeast Portland with a street and park plan that is unique among neighborhoods of comparable age in the United States. The plan for the neighborhood, which is located between Southeast Hawthorne and Division Streets and Southeast Twelfth and Twentieth Avenues, has been protected …

The Ladd Estate Company played a major role in the residential development of Portland and surrounding areas. William Sargent Ladd was the wealthiest person in the Northwest at the time of his death in 1893, and his estate included extensive land holdings. When Ladd died, his son, William Mead Ladd, …

The Portland Hotel (originally called the Hotel Portland), a project initiated by Henry Villard and the Northern Pacific Railroad, was designed in 1882-1883 and constructed in 1888-1890. The hotel established a new standard in elegance for accommodations in Portland and introduced patrons and local architects to the latest architectural trends …