William Johnson was the first permanent European settler in what is now the City of Portland. In late 1841, he moved his family from Champoeg, about thirty miles to the south, and built a log cabin—15 by 35 feet, with a lean-to—on a knoll surrounded by a dense fir forest (in the present-day South Waterfront District). It was the first farm settlement on the west bank of the Willamette River below "The Falls" (Willamette Falls).

Born in England in 1784, Johnson worked as a sailor, arriving in Boston in 1810 aboard a British frigate. He joined the American cause during the War of 1812, serving in the U.S. Navy aboard the USS Constitution also known as "Old Ironsides." During the engagement with the HMS Guerriere, he took precautions and placed crossed pieces of hoop iron in the top of his cap. He was struck over the head with a British cutlass and carried the scar on his head the rest of his life. After the war, Johnson sailed to the Pacific Coast.

By 1817, Johnson had joined the North West Company as a fur trapper, and crossed the Rocky Mountains with a party in 1819. When the company merged with the Hudson’s Bay Company in 1821, he was retained first as a servant and then as a cowherd and trapper. In November and December 1824, he signed on with John Work’s Expedition of the Puget Sound to the Fraser River. Returning to Fort Vancouver in 1826, he continued his service with HBC. Chief Factor John McLoughlin suggested that Johnson serve as a personal assistant to David Douglas, who was botanizing in the Pacific Northwest in 1830. He remained with Douglas until the explorer left for Hawaii in October 1833.

Johnson returned to his trapping life, where he met two sisters. In 1834, he married Polly (records indicate Chehalis) and settled in the Willamette Valley. Polly's sister, Louisa, lived with them until she married George Gay in 1838. The Johnsons lived near Champoeg with French Canadian families, who were former trappers, and several of John Jacob Astor's men—former voyageurs from the Wilson Price Hunt Party of 1810 and the Tonquin in 1811, who all decided to stay in Oregon Country.

Johnson figured prominently in the narratives of early visitors to the region. In January 1837, Lt. William A. Slacum, an American diplomat, led a fact-finding expedition to the Pacific Northwest. He talked with Johnson and other settlers and encouraged Ewing Young to form the Willamette Cattle Company. Two years later, Johnson worked as a guide for writer and traveler Thomas Jefferson Farnham, who wrote about Johnson’s home, farm, and family in his Travels in the Great Western Prairies (1843). And on a rainy day in June 1841, Charles Wilkes, head of the United States Exploring Expedition, wrote about his stay with the Johnson family at their Champoeg farm.

In February 18, 1841, following Young’s death, a group of settlers met at the Methodist Mission, with David Lee presiding, to elect a constitutional committee. Johnson was elected High Sheriff. This was the beginning of the Wolf Meetings. After years of living under HBC rule, the white male settlers who lived in the Willamette Valley and Tuality Plains met at Champoeg on May 2, 1843. After a debate, they voted 52 to 50 in favor of forming an American provisional government. William Johnson voted with the majority.

Tired of the flooding of his farm on the Willamette, Johnson moved his family to higher ground on the bluff above the Willamette River. The Johnsons’ daughter, Amelia, was born there on June 2, 1844. Their home became a stopping place for people such as William Cushing of Newburyport, Massachusetts, a merchant and ship owner. Cushing visited settlements in the region during 1844, and his family’s ship, the Chenamus, brought missionaries, settlers, and entrepreneurs from the Sandwich Islands to the Columbia. The ship frequently dropped anchor at William Johnson’s farm, and Cushing had several meals with the family.

On January 1846, William Johnson made out his will providing for his family and registered it in Tuality County. He died on November 12, 1848. 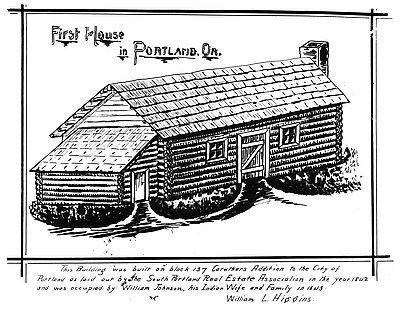 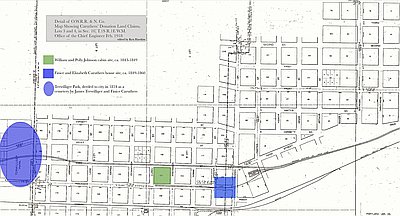 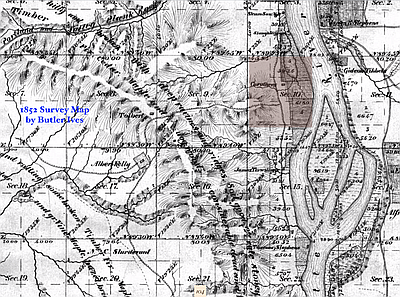 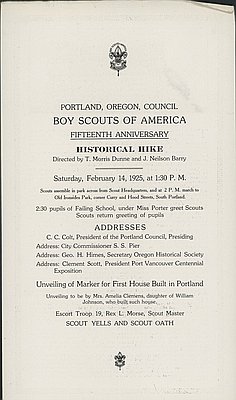 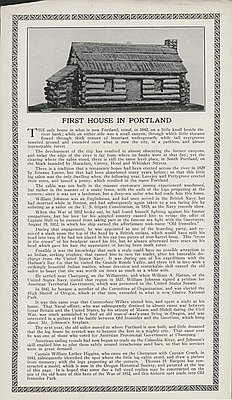 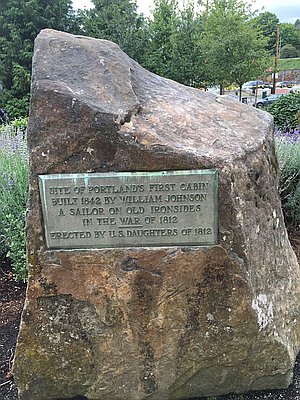 Dobbs, Caroline. Men of Champoeg: A Record of the Lives of the Pioneers Who Founded The Oregon Government. Portland, Ore.: Metropolitan Press, 1932.

Gaston, Joseph. Portland Oregon, Its History and Builders: In Connection with the Antecedent Explorations, Discoveries, and Movements of the Pioneers that Selected the Site for the Great City of the Pacific, Volume 1. Portland, Ore.: Clarke Publishing, 1911.

David Douglas is one of the best-known botanists in Oregon history, primarily because of the tree that bears the common name Douglas-fir (Pseudotsuga menziesii, once Pinus douglasii), the Oregon state tree. From humble beginnings and through fortunate circumstance, he became a highly regarded collector of Pacific Northwest …

Ewing Young was a Santa Fe trader, a Rocky Mountain Man, a California livestock trader, and one of the first Americans to permanently live in Oregon. The need to settle his estate after his death in 1841 led directly to the creation of Oregon’s first provisional government, five years …