Paul Hanneman served in the Oregon House of Representatives for more than a quarter of a century, from 1965 to 1990. In 1967, he played a key role in passing what became known as the Beach Bill, which ensured that the public had access to land between the first dunes on the Oregon Coast to the sea. Though the bill was just a "half-page long," as Hanneman described it, it left a long legacy. He is also remembered for writing the Bottle Bill, which passed early in his tenure and has had a lasting effect in Oregon and the nation. "There's any number of things you can do to help in the community,” he reminded his fellow Oregonians. “There's just so much room to work through your school or your church or your civic organization....There's a place you can go to make a change."

Paul Hanneman was born in Portland on July 20, 1936. His parents, Karl and Mary Hanneman, moved the family to Pacific City in 1945. After graduating from Nestucca Valley High School, he attended Portland State University and worked as a commercial artist, boat builder, and fisherman. He married Sandra Siltanen in 1963, and they had one child.

In 1965, he ran successfully as a Republican for the Oregon House of Representatives, representing Tillamook, Yamhill, Washington, Polk, and Lincoln Counties. He quickly established a reputation for environmental advocacy, especially through his leadership on the House Interim Subcommittee on Highways and the House Natural Resources Committee, both of which he chaired. He also served on “more than 40 local, state, and federal committees, boards and commissions,” according to the Tillamook Headlight–Herald.

Hanneman’s environmental reputation was bolstered by his leadership on the Bottle Bill, passed into law in 1971, which encouraged Oregonians to reduce their waste by providing a monetary incentive for recycling bottles. He had written the legislation, he said, after a constituent, Richard Chambers, alerted him to the detrimental effect of broken glass on natural areas. His constituents, he later remembered, were "pleading for a beverage container law and deposit.” The key legacy of the legislation, which helped reverse the practice of "no deposit, no return," was to encourage recycling. "It was pretty obvious that if the majority of litter was from bottles and cans," he said, then it was necessary to create an incentive to get rid of that "crap alongside of the beaches and canyons."

Rather than hire state employees to clean up and maintain natural areas, Hanneman used a formula he had used to pass the Bottle Bill and enlisted the help of average Oregonians. In collaboration with Senator Bill Bradbury, a Democrat, he introduced the Salmon and Trout Enhancement Program, which helped protect fish habitats. He also advocated for the health of forests, helping Oregon become the first state with a comprehensive forest planning program. The mechanics of the bill that enacted the program would remain unchanged for more than four decades.

Beyond spearheading environmental legislation, Hanneman worked to bring his constituents into the policy-making process and connected Oregonians to what was happening in the legislature. Every Friday, he presided over a conference call with Chambers of Commerce members in towns throughout his district. He also rejected the notion that work could only be done along partisan lines. "I really had trouble finding a Democrat bill and a Republican bill," he said, believing that most issues had nothing to do with partisan concerns. Hanneman was convinced that political engagement need not come through parties but instead through an informal engagement with the community. He insisted that there is a way for every Oregonian to make a change.

Hanneman’s public service did not end in Salem. He was a Tillamook County commissioner from 2000 to 2004 and in 2016 wrote The Inside Story: Oregon’s Beach and Bottle Bills. The book served as an important record of the circumstances that led Oregon to pass that landmark legislation. 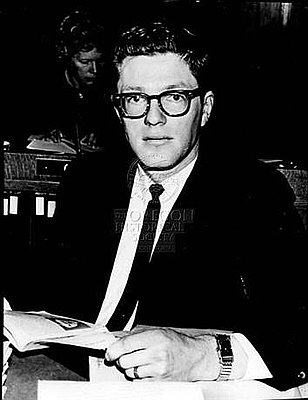 The Oregon Beverage Container Act of 1971, popularly called the Bottle Bill, remains one of the most visible and popular legacies of Oregon’s environmentalism in the 1960s and 1970s. The Bottle Bill exemplifies the broad environmental activism of the time and Governor Tom McCall’s style of leadership. It also has …