Sensing opportunity following the Panic of 1893, Montana businessman Andrew B. Hammond looked toward the more populous Oregon to expand his financial holdings. In 1894, the worst year of the depression, he purchased the bankrupt Oregon Pacific Railroad and accepted a contract to build the Astoria and Columbia River Railroad. By 1898, Hammond had completed the Astoria line and rebuilt the Oregon Pacific, now renamed the Corvallis and Eastern. Although both railroads were intended to offer transcontinental connections, their real value lay in providing access to the rich timber of the Coast Range and the Cascades.

Born in 1848 in New Brunswick, New Jersey, Hammond left home at sixteen to work as a logger in the Maine woods. He drifted west to Montana a year later. In 1883, he secured the construction contract to build the intermountain section of the Northern Pacific Railroad, catapulting his firm into Montana’s largest lumber company. Hammond soon ran into problems when the federal government indicted him on thirty-one counts of stealing timber off public land. Through a series of political maneuvering, he managed to get the case dismissed. By the time he went to Oregon, Hammond was not only an astute lumberman but also savvy at negotiating land-use laws to avoid prosecution.

In 1900, Hammond tapped his railroad backers, Collis P. Huntington and Thomas Hubbard, to form the Hammond Lumber Company (HLC). By then, he had moved to San Francisco, and he hired George B. McLeod to head the Oregon division, based in Portland’s Yeon Building. McLeod and Hammond rapidly acquired timberlands through both purchase and fraud. When the federal government began to crack down on land fraud, the two men were caught in a wide net of investigations that also ensnared Oregon’s congressional delegation. When Stephen Puter turned state’s evidence, the federal prosecutor dropped the investigation against Hammond and other lumbermen and focused instead on elected officials, most notably Oregon Senator John Mitchell.

Despite the investigation, Hammond continued to acquire timberlands, primarily in the Tillamook forest and along the North Santiam River. With his connections to the Southern Pacific, he bought 95,000 acres from the railroad, making him one of the largest private owners of timber in Oregon. Hammond purchased mills along the North Santiam in 1899 and the Hume mill in Astoria in 1908, which burned down in 1922. To haul raw logs to market in California, he partnered with Captain Hugh Robertson to establish the Oregon Rafting Company in 1901. Over the next twenty years, until Congress outlawed the practice as a hazard to navigation, Hammond used his fleet of steam schooners to tow massive cigar rafts of logs from the Columbia River to San Francisco.

During World War I, the U.S. Army identified Hammond as the single largest owner of Sitka spruce timberland in Oregon. Only the lumber from Sitka spruce was suitable for airplane manufacture.

Strikes and the radical union activity of the Industrial Workers of the World (IWW), however, threatened to shut down the logging industry. The army’s Spruce Production Division hit on an innovative solution—a government “union”—the Loyal Legion of Loggers and Lumbermen, which promoted patriotism and labor organizing but prohibited strikes and shutdowns. Thus, with the help of the army, Hammond and other anti-labor lumbermen were able to crush the IWW.

In 1927, Hammond bought the Garibaldi Mill near Tillamook and began to clear-cut his holdings along the Nehalem River. But the Tillamook fire of 1933—known as the Tillamook Burn—wiped out nearly all of the HLC's timberland in the area and compelled the closure of the Garibaldi Mill. Hammond died the following year at the age of eighty-five. Faced with declining lumber prices, the new management of the HLC liquidated its Oregon properties. Then, in 1956, Hammond’s heirs sold the HLC's holdings in California—and what had become the world’s largest redwood lumber company—to Georgia-Pacific.

Although A.B. Hammond lived in Oregon for only a few years, he played a significant role in the state’s primary industries. His railroads opened up previously inaccessible timberlands and tourist destinations, and he consolidated the salmon industry in Astoria under the Columbia River Packers Association. More than anything else, the tragic Tillamook Burn illustrated Hammond’s legacy: the social and environmental costs associated with appropriating public natural resources for private wealth. 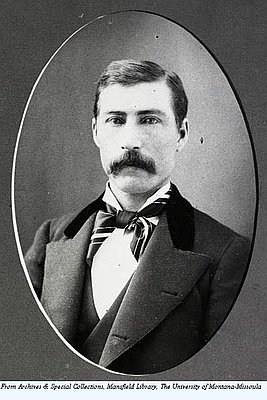 John Hipple Mitchell was a Portland lawyer and politician whose long career as a U.S. senator was overshadowed by scandal. He was convicted on charges of bribery connected to the Oregon Land Frauds in 1905, just five months before his death.

Stephen Puter was the self-described King of the Oregon Land Fraud Ring, whose cooperation with federal investigators led to the indictment and conviction of U.S. Senator John H. Mitchell in 1905.