Stephen Puter was the self-described King of the Oregon Land Fraud Ring, whose cooperation with federal investigators led to the indictment and conviction of U.S. Senator John H. Mitchell in 1905.

Puter was born on January 6, 1857. His criminal career began in 1875, after he helped the U.S. surveyor in California subdivide several townships near his family's Humboldt County homestead. As soon as the townships opened for settlement, he recruited men to file fraudulent homestead patents, which he then sold to a lumber company. Over the next three decades, he continued to acquire and sell fraudulent homestead patents, often bribing federal officials to get the patents approved.

In 1900, Puter and his partner, Horace G. McKinley, filed patents for several fraudulent homestead claims in Township 11-7, near Detroit, Oregon. Because the township was difficult to reach, Puter assumed that inspections would be unlikely. In fact, federal officials made two separate inspections, but Puter bribed them both to write favorable reports. Still, the patent applications languished at the General Land Office, so in February of 1902 Puter traveled to Washington, D.C. He paid Senator John H. Mitchell $2,000 to expedite the patents, which were approved days later.

A special inspector at the Department of the Interior began investigating Puter and McKinley in the summer of 1902, and a federal grand jury indicted them for fraud the following year. Puter succeeded in delaying his trial for several months by sending his accomplices into hiding, including his mistress Emma Watson.

Finally, on November 23, 1904, Puter's trial began at the Pioneer Courthouse in Portland. Over the next two weeks, Francis J. Heney, special assistant to the U.S. attorney general, presented evidence of the defendants' guilt. So overwhelming was the case against them that the defense rested without calling a single witness. The jury found Puter, McKinley, and Emma Watson guilty.

After his trial, Puter made a full confession to the grand jury, admitting that he had paid the $2,000 bribe to Senator Mitchell, but the attorney general was reluctant to prosecute Mitchell on the testimony of a convicted criminal. To strengthen the case, Puter helped recruit other witnesses against the senator, including a lumber company representative who had bribed Mitchell by writing him a check. With evidence from Puter, Heney succeeded in indicting and, in July 1905, convicting Mitchell for corruption.

Puter discovered that he was being investigated for other fraudulent acts, and he fled to Boston, where Secret Service detective William J. Burns apprehended him in March 1906. After making a dramatic escape on a crowded street in front of the Fenway post office, Puter made his way back to California. An associate there betrayed him to local police, and he was sentenced to two years in the Multnomah County jail. While in jail, Puter collaborated with Horace Stevens, a former General Land Office clerk, to write an account of his exploits. More than a memoir, Looters of the Public Domain proved to be the definitive history of the Oregon Land Frauds for more than a century.

On Heney's recommendation, President Theodore Roosevelt pardoned Puter on December 31, 1907. He emerged from prison a week later, on his fifty-first birthday. His date of death remains unknown. 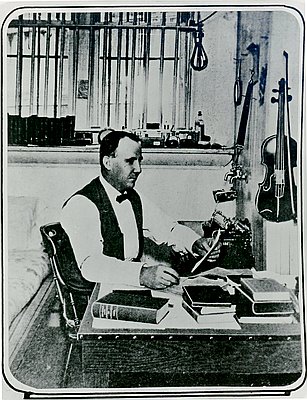 Puter, Stephen A. D., and Horace Stevens. Looters of the Public Domain. Portland, OR: The Portland Printing House, 1908.

Francis Joseph Heney was a California lawyer, judge, and politician during the Progressive era. He was the chief prosecutor of the Oregon Land Fraud trials from 1904 to 1910 and served as U.S. attorney for the District of Oregon from January 9 to December 3, 1905.

John Hipple Mitchell was a Portland lawyer and politician whose long career as a U.S. senator was overshadowed by scandal. He was convicted on charges of bribery connected to the Oregon Land Frauds in 1905, just five months before his death.

During the summer of 1905, while visitors enjoyed the amusements of the Lewis and Clark Centennial Exposition, one of the most sensational trials in Oregon's history was taking place at the Pioneer Courthouse in downtown Portland. The defendant was John H. Mitchell, then serving his fourth term in …