Greek immigrants arrived in Portland in the early 1900s, part of the largest immigration from that country to the United States. Roughly 1.5 percent of that country’s population—195,000 people—left Greece because of lack of land and job opportunities, crop failures, the dowry system, and heavy taxation. In most cases, the first Greeks to arrive in the United States were illiterate; the illiteracy rate at the time was 27 percent, the highest of any other immigrant group. Education in Greece wasn’t obligatory till 1911; after 1920, because of the establishment of compulsory education in Greece, the illiteracy rate of the Greek immigrants fell to 4 percent.

Similar to other Greeks in the West and the Northwest, the newcomers to Oregon worked in lumber mills, dug trenches for water lines, and laid railroad tracks. By 1910, approximately 700 Greeks lived in Portland, probably because the city was the largest in the state and the center of commercial activity. The Greek community was large enough to establish the first Greek Orthodox church in the city, the Holy Trinity Greek Orthodox Cathedral, at 17th and Taggart. During World War II, Greek Americans enlisted by the hundreds, and those who stayed behind were instrumental in the relief efforts. The community of Holy Trinity donated $3.5 million to help Greece during the war.

Despite their peasant background, the Greek immigrants to Oregon were not interested in agricultural occupations. Instead, their focus was on becoming entrepreneurs, mainly fruit and vegetable peddlers and shoe shiners, and they also entered the theater, candy, and restaurant businesses. In the West, most Greeks worked in lumber mills and mines and for the railroad. In the early immigration years, the padrone system was in operation, especially in the shoe-shining trade, in fruit, vegetable, and flower peddling, and in railroad construction. The padrone was a labor agent who spoke both the immigrants’ language and English, had usually furnished a ticket to the immigrant, and provided a job in return for a “cut” from the immigrants’ pay. John Karamanous was one of the many Greek entrepreneurs in the Portland area, starting a dairy delivery service in 1936 called Sunshine Dairy—a business still in operation today.

During the early years of Greek immigration, an important communal organization was the coffeehouse, or kafeneio, a social center where Greek men met after work. By 1926, there were several coffeehouses in Portland. More formal communal organizations included Greek orthodox churches and cultural associations. In Portland, a new church on 31st and Glisan was consecrated in 1956; until 1977, it was the only Greek Orthodox church in Oregon. In 2007, the church became the Holy Trinity Cathedral of the Northwest. There are now two more churches in Oregon—St. George the Baptist in Beaverton and St. George in Eugene—as well as a Greek Orthodox mission in Salem. The Greek community also formed philanthropic organizations like the American Hellenic Educational Center, formed in 1977 with the help of Gus Kriara, which helped establish Camp Angelos in the Sandy River Valley.

Celebrations are important to the Greek community. Each year, Holy Trinity Cathedral in Portland attracts more than 15,000 participants to its two-day festival on the first weekend in October, celebrating with Greek food and traditional dances. St. George Greek Orthodox Church in Eugene sponsors Glendi in early May, a celebration with Greek cuisine, folk music, and dance. The most important celebration for Greece is March 25, Independence Day, which marks the anniversary of the Greeks’ uprising against the Ottoman Empire in 1821. To commemorate the event, restaurants in Portland and Eugene frequently hold special celebrations. 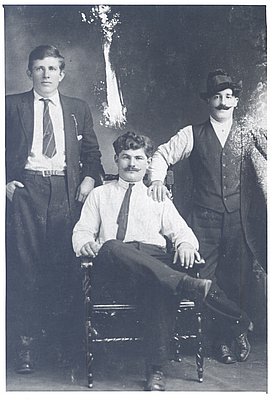 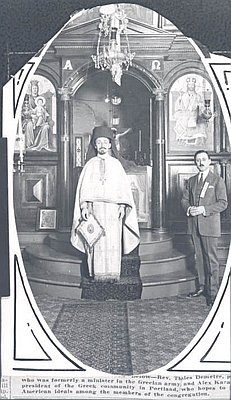 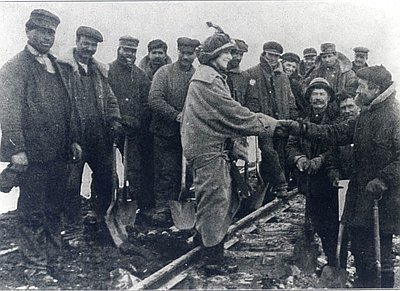 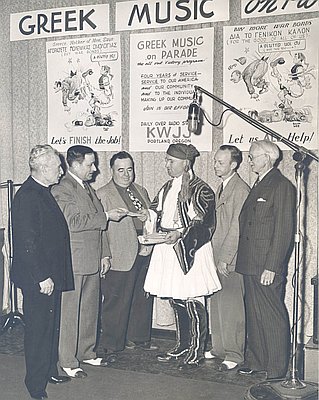 Doulis, Thomas. A Surge to the Sea: The Greeks in Oregon. Portland, Ore.: Jack Lockie & Associates, 1977.