From an early age, Jack Kenneth Eyerly was active in the Oregon arts community as an adviser, curator, artist, director, and facilitator. A uniting force for the arts in Oregon, he broke geographic barriers among artists by physically taking their work to each other, thus expanding the scope of art in the Northwest through direct interactions. Through his efforts, he made progress toward allowing craft artists, dancers, and filmmakers into the realm of critically accepted fine art. In 1971, he helped create the Northwest Film Studies Center (now the Northwest Film Center) in Portland.

Born in Portland in 1935, Eyerly spent his youth in Salem. He organized gallery shows in an empty tack room at Salem High School for his fellow students, and he was one of three Salem High School students to win a national scholastic award in art in 1952. That award brought him to the attention of artist Carl Hall, a professor at Willamette University. Through him, Eyerly came into contact with Hall’s contemporaries in Oregon, including Clifford Gleason, Louis Bunce, and Nelson Sandgren. Those connections allowed him to expand his Salem-centric circle of artists to include artists such as Rick Bartow and Lee Kelly. He created a traveling show of artwork in his van, selling them on the side of the road, exchanging them with other artists, and in the process exposing people to Oregon artists and ideas.

Eyerly spent a semester at the Colorado Springs Fine Arts Center in 1954 but left after deciding that it was a “fake operation.” His reaction may have been a result of his fascination with the Dada movement and its anti-institutional ideas. He worked as the director of the Bush House Museum in Salem, curating exhibits focused on Pacific Northwest artists, including Exhibition Syndrome in 1961 that featured Portland Dadaists. After Genevieve Wilson established the Art Department at Mount Angel College in 1960, Eyerly and Jon Masterson built a gallery in one of the classrooms, laying the groundwork for an avant-garde hotbed in the valley.

In the early 1970s, Eyerly was a founding board member of the Northwest Film Study Center. He supported the development of films and short videos as modern art forms, helped establish Portland as a haven for independent film and video art, and provided technical resources for filmmakers. He also helped create festivals, including the Northwest Filmmakers’ Festival and the Young Filmmakers’ Festival (now Fresh Film Northwest).

Eyerly was the founding member and executive coordinator of the Portland chapter of Experiments in Art and Technology (EAT), a group started in New York City to expand the interactions between art and technology by creating a space for artisans such as airplane and machine designers with artists. Those efforts led to interesting shows, including one at the Pepsi Pavilion Expo in Osaka, Japan, in 1970, where EAT members created an immersive hologram experience. Eyerly attended the founding meeting for the EAT Seattle chapter, which boasted a roster of experts who ranged from Boeing engineers to light designers for rock stars. He was so inspired that he founded the Portland chapter.

Early in his career, Eyerly became fascinated with creating an archive of Northwest art, a project that he would work on throughout his life. He collected material through a network of advocates and his near omnipresence in the art scene. He allowed close friends to look through the collection and take what they wanted if they promised to use it creatively. For some artists, such as Brian Kazlov and Clifford Gleason, Eyerly served as a steward of materials relating to them after their deaths. The collection, now at Willamette University’s Archives and Special Collections, represents more than two hundred artists and contains materials that include artworks, personal documents, letters, and limited-edition comics.

Eyerly’s wife Polly Illo, curator of education at the Portland Art Museum, died in 1984, and he became less of a presence on the Oregon arts scene. He briefly lived in Seattle but returned to Portland in the late 1980s, when he focused on his work at the Albertina Care Center store Wacky Willy’s, a second-hand electronics vendor that employed people with disabilities. During his time at the store, Eyerly contributed to several notable art pieces, the best known being the device held by writer Ursula K. Le Guin in Henk Pander’s portrait of her. He married Deloise Holeton in 2000.

After twenty years of service at the center, Eyerly retired because of health issues that kept him from working or creating art until his death on May 10, 2014. A small booklet was published by some of his friends after his death, titled Remembering Jack Eyerly, which is in his collection at Willamette University. 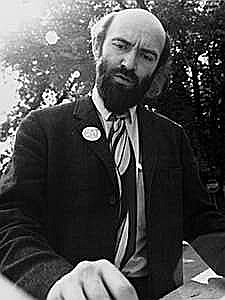 The Albertina Kerr Centers, a nonprofit organization with headquarters in Portland, provides services in Oregon for children, adults, and families with mental health challenges and developmental disabilities. In addition to its support for individuals with Down syndrome, autism, cerebral palsy, epilepsy, and other development disabilities, Albertina Kerr also evaluates and …

Carl Hall was a Salem artist known for his paintings of the Willamette Valley, the Oregon coast, the female nude, and imagery inspired by the Northwest Coast Native culture he encountered on his trips to Alaska. Working in Oregon for fifty years, he created a large body of work that …

Nelson Sandgren was a painter and printmaker who taught at Oregon State University for thirty-eight years, from 1948 until 1986. He exhibited his work in Oregon, Washington, and California while participating in a mid-century Willamette Valley cultural scene that included his faculty colleagues and others in a variety of creative …