Dick Bogle was a multi-talented Oregonian and humanitarian who dedicated his adult life to service in the Portland area. The great-grandson of Northwest pioneers, Bogle was a modern pacesetter—one of the first Black police officers in Portland, the first Black television newscaster in the Northwest, and the second Black city commissioner of Portland.

Bogle was born in Portland in 1930, the son of businessman Richard W. Bogle and Kathryn Hall Bogle, a social worker and activist for social justice. When he was a child, Bogle’s mother expanded his horizons by taking him and his friends on “tours” that may have originated because of her experiences of job discrimination. The excursions opened the young Bogle’s eyes. “My own mother took groups of kids on tours of The Oregonian,” he later wrote, “a bakery, a laundry, a dairy and other places she thought would broaden our vision of what our futures could become.”

Bogle was raised in a multicultural neighborhood on Southeast Tibbetts Street, an area that included Italian, Chinese, white, and Black families. At Hosford Grade School, he learned about the possibility of attending college from his teachers and Principal Howard Agar, and he came to realize that being Black was not necessarily a barrier to success. He attended Washington High School, Oregon State College (now Oregon State University), and the Vanport Extension Center (now Portland State University). During his teens, he spent much of his free time on North Williams Avenue, frequenting jazz clubs where he became enamored with the music. Jazz would be a lifelong passion for him.

During his twenties, Bogle worked briefly as an insurance fraud investigator. He felt the sting of racism, as many of his co-workers made extra money moonlighting as private guards, a position closed to him because he was Black. In 1952, he published his first jazz review for the Portland Challenger, a maverick newspaper founded by his childhood friend William Hilliard, who later became the first Black editor of the Oregonian.

From 1959 to 1967, Bogle worked as a police officer and wrote jazz reviews and sports stories for the weekly Portland Reporter. In January 1968, he became the first Black on-air reporter for a Northwest television station when he was hired by KATU. He was placed on the May primary election team and later served as one of three newscasters who interviewed nationally known trial attorney Melvin Belli (attorney for Jack Ruby, among other high-profile clients) in September 1968. In 1973, he was named an anchor on KATU’s “Eyewitness News.” While working as a television reporter, Bogle met Nola Sugai Porter, a jazz singer with two daughters. They married in 1977 and had three more children.

Bogle left KATU in 1982 to become the executive assistant to City Council Commissioner Mildred Schwab, serving as her liaison with the Portland Police Bureau. In the summer of 1984, when Charles Jordan announced his resignation from City Council, Bogle threw his hat into the ring for the position. The field expanded to a record nineteen aspirants, and it was doubtful that any candidate would achieve the necessary 50 percent of the vote. After receiving 28 percent of the vote in the November election, Bogle faced a December runoff against Herb Cawthorne, a Portland State University administrator and Portland School Board member, who received 16 percent. Bogle won the runoff election with 55 percent of the vote.

"I promised I would work to make Portland a city my grandchildren would be proud of," Bogle said on his final day as commissioner in 1992. "I have and it is." Bogle was a progressive voice on the City Council and was also active in the community. In honor of Martin Luther King Jr. Day, for example, he worked at Baloney Joe’s, a homeless shelter; he moderated “Portraits in Black,” a theatrical presentation at the Interstate Firehouse Cultural Center; and he visited high schools to talk to students about city government. He won re-election in 1988, but was outspent when he ran for a third term in 1992, hurt by controversies involving accounting irregularities and an earlier sexual harrassment settlement. Bogle came in third in a five-way race, losing to Charles Hales.

In his retirement, Bogle invested time in two of his passions—jazz and photography. He hosted a jazz show on a Paragon Cable TV show and volunteered to be a DJ on the Mount Hood College radio station. He returned to reporting on the jazz scene, writing reviews for the Portland Skanner and Down Beat and taking photographs of jazz artists.

He volunteered in April 2008 for the Portland Police Cold Case Homicide Unit. At age seventy-seven, he was the oldest of seven retirees who sifted through the files of unsolved cases, some going back to 1983. With decades of experience, the veterans looked at evidence through new eyes and used new techniques. Bogle used his writing skills to record abstracts of the cases.

The Jazz Society of Oregon expressed their appreciation by creating the Dick Bogle Scholarship Fund for young people interested in pursuing a career in jazz. He also served on the Editorial Advisory Board of The Oregon Encyclopedia. 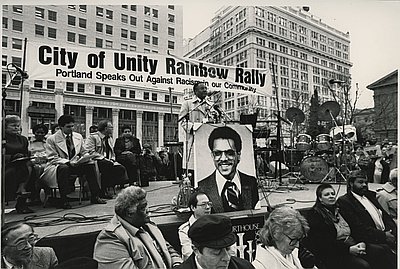 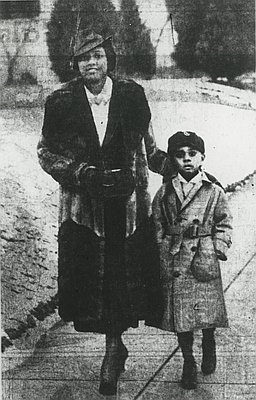 A freelance journalist, social worker, and community activist, Kathryn Hall Bogle is remembered as “one of Portland’s earliest and most passionate advocates of racial diversity.” She wrote articles for many African American newspapers, including the Pittsburgh Courier, the Seattle-based Northwest Enterprise, the Portland Observer, and The Skanner …

A Portland city commissioner for fourteen years, Mildred Schwab was known for her sharp tongue, colorful personality, and frugality regarding city funds. A lover of music and an accomplished pianist, she played an important role as the commissioner in charge of the development of the Portland Center for the Performing …

Portland's commission form of municipal government, which the city adopted as a progressive innovation in 1913, is a rarity and relic in the twenty-first century. Despite Portland’s reputation for innovation in other realms, voters for more than a century have stubbornly stuck with the basic structure in which a small …

William A. Hilliard was the first African American editor of the Oregonian and one of the few to serve as the editor of a major newspaper. Growing up in Portland, he was refused a paper route for the Oregonian for fear that white subscribers would resent it, and he …