A product of the third longest newspaper strike in the United States, the Portland Reporter launched in 1960 as an alternative to the Oregonian and Oregon Journal. Echoing unrest in newsrooms from New York to Los Angeles, the Reporter’s staff protested new printing technology, layoffs, and the consolidation of newspapers.

The strike began on November 10, 1959, when fifty-four members of the stereotypers’ union Local 49 walked away from work and out of the Oregonian's building on Southwest Broadway and Jefferson Streets in Portland. The strikers picketed one block around the Oregonian and went door-to-door throughout the city urging residents to cancel their subscriptions. The day after picket lines formed, Portland’s two largest dailies merged under the masthead the Oregonian-Oregon Journal. The company hired nonunion workers from as far away as Florida and printed a paper that Time characterized as “typo-marred.”

Within three months, the first handful of stereotypers were joined by 850 members of eleven newspaper unions. At around midnight on January 31, 1960, dynamite set in six newspaper delivery trucks in Oregon City and four in northwest Portland exploded. Fights erupted on picket lines, and Oregonian production manager Don Newhouse was shot. The February 22, 1960, issue of Time magazine called it “a finish fight, eyed closely by printing-craft union men and newspaper publishers all over the U.S.”

A year into the strike, eighty Portlanders donated $150,000 to buy and remodel an abandoned Wells Fargo stable as the Reporter’s newsroom. The International Typographical Union leased carloads of equipment from Miami at ten dollars a year, including a press from 1890 that the staff dubbed “Little David.”

Led by Robert A. Lee of the Portland Newspaper Guild, labor unions formed the Portland Reporting Publishing Company. On February 11, 1960, they printed the first issue of the Portland Reporter, an eight-page weekly with a circulation of 60,000. On the front page, the editors wrote that the paper would “give a concise, readable report” on city news and that it would not serve as a “propaganda weapon or publicity medium” for the strike. Headlines reported a fatal crash on Barbur Boulevard and Fred Meyer’s initial public offering. Early issues featured a sports section with a column on local bowling tournaments, television listings, and “Women’s News.”

In the Reporter’s early days, spirits ran high among the staff. Some top investigative journalists from the Oregonian sided with the new weekly, among them Wallace Turner, who won a Pulitzer Prize in 1957 for a series on ties between union leaders, mobsters, and city officials. A former Oregonian editor, John Wykoff, became managing editor. Labor activist Gene Klare served as reporter, advertising sales manager, and promotions manager. Around one in the morning, the staff would leave the newsroom to drink at The Gay Nineties, where they regularly sang “We Shall Overcome.”

Portland was “the only U.S. city that ever went into a strike with two dailies and wound up with three,” Time reported on March 8, 1963. Though local newspapers reportedly could not keep pace with larger publications in many U.S. cities, the Reporter continued to attract readers and transitioned to a daily with a print run of 78,000. Before the strike, the Oregonian circulated 242,035 morning issues. Publisher Michael Frey estimated that the strike caused that number to drop by 70,000.

By 1963, the Reporter had recorded a debt of $536,000. Many of its journalists crossed picket lines to return to the Oregonian, while others were blacklisted from newsroom jobs at any paper. After the Reporter published its last issue on October 1, 1964, the Oregonian and Oregon Journal declared their operations to be an open shop, banning unions from the workplace. In November, the National Labor Relations Board ruled the sixty-five-month strike illegal.

The outcome of the conflict represented the triumph of technology over workers and signaled the end of an era of fierce newspaper competition. When Oregonian publisher Samuel Newhouse bought the Journal for $8 million during the strike, he ensured the Oregonian would go unchallenged by unions or competing papers anywhere in the state. Though several smaller papers including Willamette Week, the Portland Alliance, and the Portland Tribune have emerged in years since, none have come close to matching the Oregonian in size or readership. 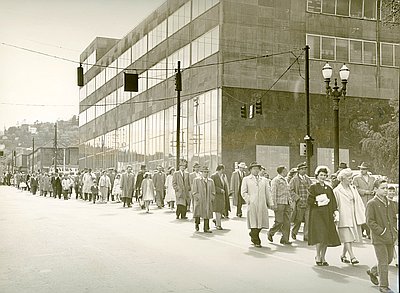 Olsen, Polina. Portland in the 1960s: Stories from the Counterculture. Charleston, S.C.: The History Press, 2012.