The Cantonese-Chinese were the first Chinese in Oregon. They immigrated to America primarily from the Pearl River Delta region in southeast China in the century from 1850 to 1960. This region forms the central third of their home province of Gwongdung (Cantonese pronunciation; Guangdong is the standard Pinyin "Mandarin" Chinese spelling, formerly spelled in Wade-Giles Mandarin as Kwangtung.) This group decisively shaped the first century of Chinese experience in Oregon.

Small groups of Cantonese-Chinese miners, who arrived in Oregon Territory in 1850-1853, represented the first Chinese migration beyond northern California, the earliest and primary location of Cantonese-Chinese settlement in America (1850-1860). In the early 1850s, these miners and a handful of merchants settled in two different but widely separated parts of Oregon Territory.

They went first to southwest Oregon, with the largest number settling in Josephine and Jackson Counties; fewer went to Douglas and Grant Counties. These Chinese formed a geographical and chronological extension of Cantonese-Chinese mining activity in northern California’s Shasta and Trinity Counties. The second location was in northeast Oregon, which became the gateway to the Inland Empire in the southeast corner of Washington Territory (1859-1889), with specific reference to Walla Walla and the Boise Basin in present-day Idaho (1863-1890).

From 1855 through 1865, the majority of Cantonese-Chinese settlers in Oregon were miners, with a minority of merchant types. Their numbers were unstable, rising and falling with the boom and bust of gold mining. The 1860 census officially lists thirteen Chinese in all of Oregon, with ten of them in Benton County. Given the unstable material conditions of the time and the general reports of locals, it is safe to surmise that this number represents a serious undercounting. It is more accurate to say that there was a likely range of from a few dozen to a few hundred Cantonese-Chinese in Oregon, especially in the early 1860s. READ MORE

The Sparta Ditch, by Jodi Varon

The Sparta Ditch, a thirty-two-mile-long irrigation ditch straddling the Union-Baker County line, was built in 1871 to facilitate gold mining in that area. The ditch begins on the U.S. Forest Service Pine Ranger District, eight miles northwest of the unincorporated town of Sparta. It is a tangible example of the contribution made by Chinese laborers in northeastern Oregon whose ditch systems, flumes, and tunnels supplied water for local mining concerns. 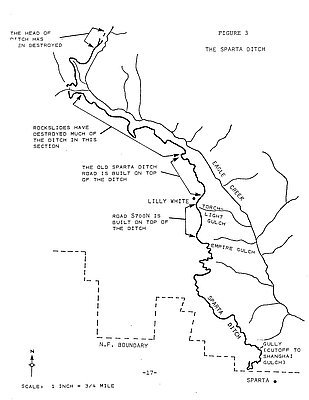