Hazel Ying Lee, who was born and educated in Oregon, was the first Chinese American woman to fly for the U.S. military, one of two Chinese Americans in the Women Airforce Service Pilots (WASPs)—the other was Margaret “Maggie” Gee from California—and one of thirty-eight WASPs who died in service. Known for her skill and courage, her peers considered her to be an excellent pilot.

Lee was born in Portland on August 24, 1912. Her parents, Yuet Lee and Ssiu Lan Lee, were Chinese immigrants who met and married in the United States, and then raised eight children in Portland at a time when anti-Chinese sentiment was prevalent. Hazel Ying Lee graduated from Commerce High School (now Cleveland High School).

Hazel Ying Lee was drawn to flying while still a teenager. She took a job as an elevator operator at Liebes Department Store in downtown Portland and saved money for private flying lessons. She later enrolled in the flying program sponsored by the Portland Chinese Benevolent Society and was flying by the time she was nineteen.

In 1932, Japanese military forces invaded and occupied Manchuria, China. The League of Nations demanded their withdrawal, but Japan refused, and by 1933 occupied the northern province of Jehol. Lee, like many Chinese Americans, traveled to China in hopes of joining the Chinese Air Force to oppose the Japanese invasion, but they did not accept women pilots. She worked a military desk job for a time and flew on occasion for a commercial outfit out of Nanjing before returning to the United States in 1938. In the Fall of 1942, she heard about and applied for the Women’s Flying Training Detachment (WFTD)—which became the Women’s Airforce Service Pilots (WASP) in 1943. She was accepted into the program, and during a six-month training regimen in Texas learned to fly a variety of military planes.

Lee graduated from the program in 1943. Shortly thereafter, the Women's Air Ferrying Service (WAFS) merged with the WFTD and was renamed WASPs. Lee was stationed at the Air Transport Command’s 3rd Ferrying Squadron at Romulus Army Air Base in Michigan, where she flew ferrying and administrative flights in Stearman Pt-17s, North American T-6 Texans, and the Boeing C-47, which could transport up to 6,000 pounds of cargo. In 1944, Lee attended Pursuit School in Brownsville, Texas, becoming one of a select group of women qualified to fly high-powered, single-engine, fighter aircraft, including the P-51 Mustang.

Known for her humor and fearlessness, Lee had only two forced landings in her career, one of which was in a Kansas farmer’s field. The farmer mistook her for Japanese and chased her around her plane with a pitchfork until she was able to convince him otherwise.

Hazel Ying Lee died on November 25, 1944, as a result of injuries sustained in a collision on a runway in Great Falls, Montana. Three days after hearing of her death, her family received a telegram informing them that her brother Victor had been killed in combat in France. The two are buried alongside each other at Riverview Cemetery in Portland.

Lee’s service was typical of the over one thousand women who joined the WASPs. On average, they were paid less than men, had to pay for their own room and board and even their own uniforms. They did not receive military benefits; and for those thirty-eight who died in service, the U.S. Air Force did not pay for funeral expenses. In 1977, President Jimmy Carter gave WASPs veteran status. President Barack Obama awarded the WASPs the Congressional Gold Medal in 2010. 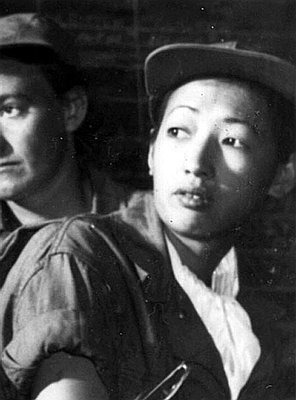