Lung On (Liang Guanying, also known as Leon) was a partner with Ing Hay in the Kam Wah Chung and Company general store and apothecary in John Day from 1887 to 1940. Born in 1863 in Guangdong Province, China, he arrived in California in 1882 and formed a business partnership with Ing Hay, a Chinese herbalist, in 1887.

Lung On, from a prosperous Chinese family, was an educated Chinese classicist, and his fluency in Chinese and English made him invaluable to both the Chinese in John Day and the non-Chinese who contracted labor and traded with the store. He served as interpreter and translator, scribe, and business mentor for the Chinese in John Day. He was noted for his conviviality, his knowledge, and his love of games of chance, including horse racing.

In 1905, the Kam Wah Chung was ransacked in an unwarranted search, and Lung On and two other Chinese men were accused of possessing opium. A mob ordered them to leave town. But Lung On remained in John Day, pled not guilty to the charges, and was acquitted. He later helped Chinese laborers navigate local laws when violence and robbery were perpetrated against them.

As he aged, Lung On became known as Leon, and local children frequented the Kam Wah Chung for his gifts of candy. He was a leader in the Sze Yup Communal Organization of Eastern Oregon and held investments in mining interests, real estate, and labor contracting. He opened the first automobile dealer franchise in Oregon east of the Cascades and a service station, Tourist Garage, which operated until his death in 1940.

Lung On’s estate was valued near $90,000 in 1940, and proceeds were divided between Ing Hay and Lung On's wife and daughter, who had remained in China, though his family was never able to recover their share of the estate. Lung On is buried in John Day. 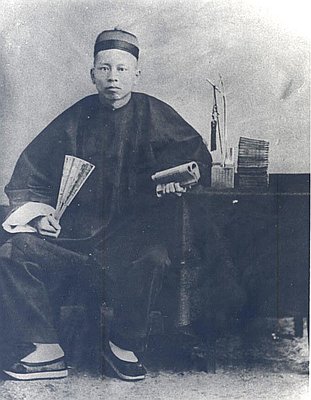 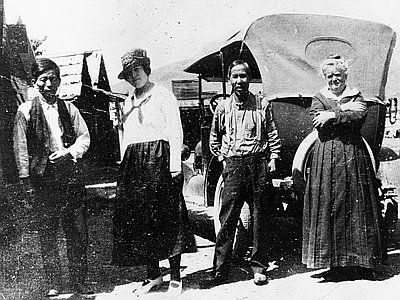 Chen, Chia-Lin, A Gold Dream in the Blue Mountains: A Study of the Chinese Immigrants in the John Day Area, Oregon, 1870-1910. Portland: Portland State University, 1972.

Ing Hay (Wu Yunian), also known as Doc Hay, was a partner of Kam Wah Chung (Jin huachang) and Company in John Day from 1887 to 1948.  Born in Guangdong Province, Toisan (Daishan) County, China, he emigrated first to Washington State, then to eastern Oregon in 1887. His immediate family …

The Kam Wah Chung and Company (Jin huachang ‘Golden Flower of Prosperity’) was a Chinese-owned grocery, dry goods store, and clinic in John Day. Built as a trading post along The Dalles Military Road in about 1866-1867, the store enjoyed a vigorous Chinese clientele and provided a gathering place …